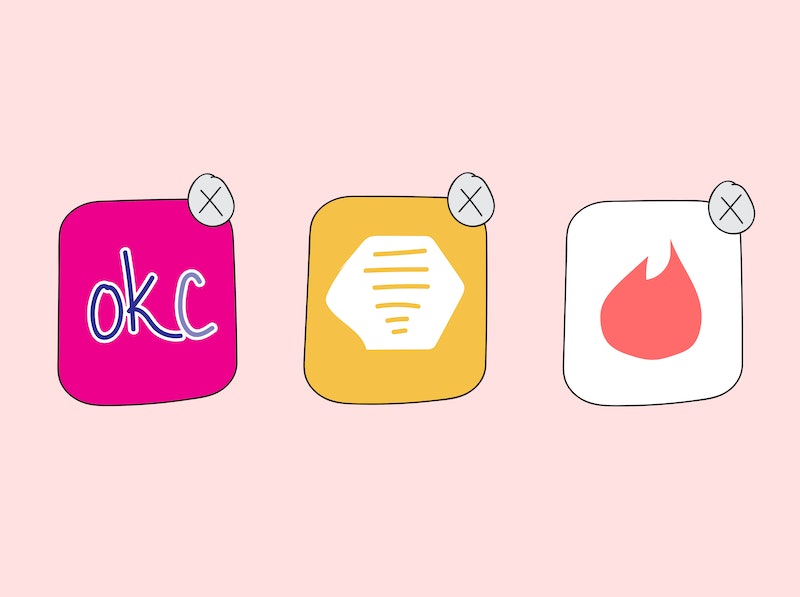 When I first agreed to delete all my dating apps as part of Bustle's App-less April challenge, I figured it would go one of two ways. Best case scenario, I would meet a handsome stranger while waiting in line for Chipotle, and he would casually observe how compatible our burrito bowl orders were, and because my attention wasn't focused on incoming Tinder messages, I would be free to gaze at him coyly, remark that the man of my dreams never minds paying extra for guac, and we'd fall in love, live happily ever after, and celebrate our anniversary with carnitas for years to come (#burritobless). Either that, or I'd be unable to keep my idle, twitching thumbs from swiping aimlessly across the blank screen of my app-less smartphone, and devoid of matches, would spiral into a state of dateless boredom. What I wasn't expecting was to actually learn something from my experience.

According to a poll conducted by the Pew Research Center, one third of Millennials say they have never gone on an actual, real life date with someone they've met on an app. Prior to App-less April, I was having the opposite problem. A fervid swiper, I was regularly going on first dates with people I met on Tinder and OkCupid — but rarely second ones. Why? Because why should I? Quite frankly, the Tinder dates I was going on were either really bad, or just really boring. Although I could message back and forth for days with someone I had never met before and fill my heart up with hopes and dreams for the future based on a single well-placed winky face emoji, that type of chemistry wasn't exactly translating to real life. App-less April, I figured, would be the perfect detox.

Taking a break from dating apps — and even non-dating apps, for that matter — can be a helpful way to mentally recharge, according to experts. "I suggest a break to my clients all the time," dating and relationship coach Ravid Yosef tells Bustle. "Sometimes our energy is what's attracting others and if we don't have enough self-care in our life or get obsessive with our notifications, we start looking for validations outside of ourselves. Which in turn attracts the wrong kind of attention."

Of course, the fact that I was going on less-than-satisfying dates is not a blow to dating apps. The technology was successfully doing its job — it was pairing me up with people I would likely never have met otherwise. But, I was turned off by the thought that apps were giving me a false sense of chemistry, and I thought that by getting off of them for a little bit, I'd get a better sense for what I was really looking for in a match. At least, that was the plan.

Spoiler alert: I didn't actually end up meeting my one true love standing in line at Chipotle, or anywhere else, for that matter. But, I didn't go through complete withdrawal, either. In fact, after I got over the initial weirdness of not having my apps available, I kind of forgot about them altogether. It wasn't until I got to the end of the App-less April challenge that I realized that even though I didn't score the perfect match, I had picked up a few lessons along the way. Here's what I've learned about dating since deleting my dating apps. But first, check out the latest episode of Bustle's Sex and Relationships podcast "I Want It That Way":

1. First Dates Are Going To Be Awkward No Matter What

I didn't go on a ton of first dates during App-less April, but the ones I did go on were, well, awkward — in some cases, even more so than some of my most cumbersome Tinder dates. This was one of my bigger takeaways from the challenge: I realized that first dates are always awkward, no matter how you met, or how much you think you have in common. I needed to stop blaming a low-quality user base for my bad dates, and instead focus more on why these dates were going so terribly. Was there anything I could do to improve them? Did I need to listen more, or ask more engaging questions? Or maybe, I needed to do something even more extreme — like wait until a second date before I totally blew someone off. And, that leads me to my next point.

2. Second Dates Are Where It's At

In my life before App-less April, if I didn't instantly hit it off with someone on a first date, I didn't bother going on another one, because clearly if we were meant to be, I would have been blinded by stars and puppies and unicorns and other things that happen when you're delirious having met the love of your life. Plus, there were so many more people to be met just by swiping right, that it didn't matter that this date was a bust, because I could line up a new one pronto and start the dance all over again.

But without my dating apps and therefore, fewer new dating options on the horizon, revisiting past interests began to seem more appealing. And you know what? The wild word of second dates wasn't so bad. In fact, I discovered that I had plenty of things in common with people I had prematurely wanted to dismiss. It occurred to me that maybe dating apps were making me a little lazy. I didn't want to work to get to know someone on a more profound level — so I just moved on to the next person instead.

Although dating apps aren't nearly as stigmatized as they used to be, our culture is still obsessed with the "how did you meet?" story. Saying "oh, we bumped into each other one day on the sidewalk and I would have fallen into oncoming traffic had she not been there to catch me" may seem more romantic than "I sent her a message on OkCupid one night because I was bored," but the fact of the matter is, how you meet has no real impact on whether or not you'll click as a couple. Your meeting story could be pulled straight from a rom-com, and you can still have absolutely nothing in common.

4. Dating Apps Make You Hyperaware Of Who's "Your Type" — Even If They Aren't Really Your Type

I never really thought I had a "type" before I started using dating apps. But once I was on Tinder and OkCupid, I noticed I was only swiping right on dark-haired guys with cute dogs and an expressed interest in high-brow literature. Dating apps are wonderful in that they help you pick people you think are a good match for you based on qualities you prioritize. But, that can also be kind of limiting, when you're looking to meet people in the real world. During App-less April, I realized I was mentally swiping left and right on people I encountered on the street, and wondered if I was hindering my chances of meeting someone great, just because they didn't perfectly live up to my unrealistic standards. It's good to know what you like, but it's also important to be open-minded.

5. Making The First Move Doesn't Have To Be Scary

On dating apps, I have no problem reaching out to complete strangers and making the first move. In fact, that's the beauty of dating apps — they eliminate a lot of the anxiety that comes with meeting face-to-face. But when apps weren't an option, I found it useful to just pretend like I was still on Tinder when I wanted to talk to someone for the first time, and channel those same fearless vibes. My best pickup line so far? A simple "hi." It's a neutral opener, but still friendly. And most times, someone is going to say it back.

6. Your Phone Is Distracting You More Than You Think

Bustle editor Michelle Toglia put this best when writing about her own App-less April experience: "Deleting my dating apps has removed the weight my phone used to carry (both in terms of data storage and in my mind). My phone is no longer a source of stress." The amount of time I've spent in the last 30 days wishing I was able to check my apps only made me realize just how often I think about them on a regular basis. Whether I'm physically checking messages on dating apps, perusing through matches, or just thinking about who I'm going to meet next, my phone is constantly at the forefront of my brain — and that's only when it comes to dating apps. Who knows how much time I spend thinking about email, Instagram likes, or Twitter follows?

This, I think, is one of the most meaningful lessons I've learned from this challenge — to be more mindful of how much of my life I'm living digitally. Honestly, I just have more important things to think about than how many superlikes I've gotten in one day.

I mean, of course it's not — but above all else, this is what I need to remember. Dating apps can be a wonderful way to connect with people, whether you're looking for a casual hookup or a more longterm relationship. They lose their power when you begin to prioritize how many people you're meeting over what kind of people you're meeting. For me, dating apps had become a numbers game — an opportunity to see how many matches I could rack up, rather than a chance to meet one person who I truly connected with. I'm hoping that, going forward, that changes.

App-less April has meant different things to different people (you can read more of their stories here), and my takeaways may not exactly align with someone else's app-free existence, but it's helpful personally to step back and see where my dating game can improve. Will I reload my dating apps now that the challenge is over? Probably. But, I'm glad I gave them a little break. And who knows? My Chipotle dreamboat may still await.

More like this
The “Rules For Dating” TikTok Trend, Explained
By Lexi Inks
9 Alternatives To The 3-Day Texting Rule In Dating
By Ginny Hogan
What Is "The Ick?" The TikTok Dating Term, Explained
By Courtney Young
15 Flirty "Thinking Of You" Texts That’ll Make Your Crush’s Day
By Lexi Inks
Get Even More From Bustle — Sign Up For The Newsletter