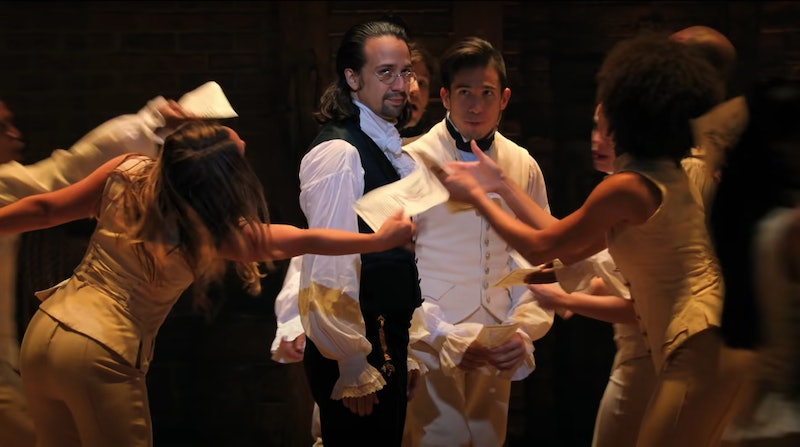 It's rare that a Broadway play transcends its medium to become a full-blown national phenomenon, but Lin Manuel Miranda's Hamilton did exactly that. As it became the hottest ticket in town, it seemed those eager hopefuls wanting to catch the original cast in action had next to no chance. But in February 2020, Miranda tweeted a film version of the play would hit theaters October 15, 2021, after Disney bought rights. No one can predict the future though, and with many theaters closed indefinitely due to the global pandemic, Disney moved the release up to this July and decided to drop it on its streaming service, Disney+. Miranda hasn't appeared onstage in Hamilton since July 2016, so when was Hamilton recorded?

The play's director Tommy Kail took an interesting approach when it came to getting Hamilton on screen. Instead of trying to translate the smash success offstage, the movie version of Hamilton gives audiences what Lin Manuel Miranda told CNet is "better than the best seat in the house at [the play]", the actor shared. "What I wanted to do was...try to capture the energy of what it was like to be in the Richard Rodgers Theatre in June of 2016, because I never felt anything like that," Kail told SlashFilm. "And I thought, can you capture something that ephemeral on film?" There was the additional urgency of several other original cast members (including Miranda) set to leave the play in July 2016.

With only three days available to film and no chance to go back and pick up additional footage, shooting moved ahead. Kail recorded two full live performances of Hamilton with audiences watching. Then over the course of a few days, Kail brought in a dolly and Steadicam to film "13 or so" of the show's numbers in close up without an audience. The main challenge when it came to creating a film from the footage for Kail and Miranda was, "how do we learn from the patterns of the show...to give the viewer at home or in the movie theater a point of view that no one has ever had? That was a real guiding principle," Kail also told SlashFilm.

Editing began immediately through the summer and fall of 2016. "I wasn’t doing it because it was going to come out soon, I just did it because it was very fresh in my head," said Kail, who was at the time preparing to take Hamilton on its first national tour, starting in Chicago. Since there was no urgency or deadline, he took time away from the film to work on other projects, returning with a fresh eye and making slight changes a year and a half later. And that's the version of Hamilton audiences will get to see on Disney+ — the hottest ticket on Broadway, now available for only the price of a subscription.