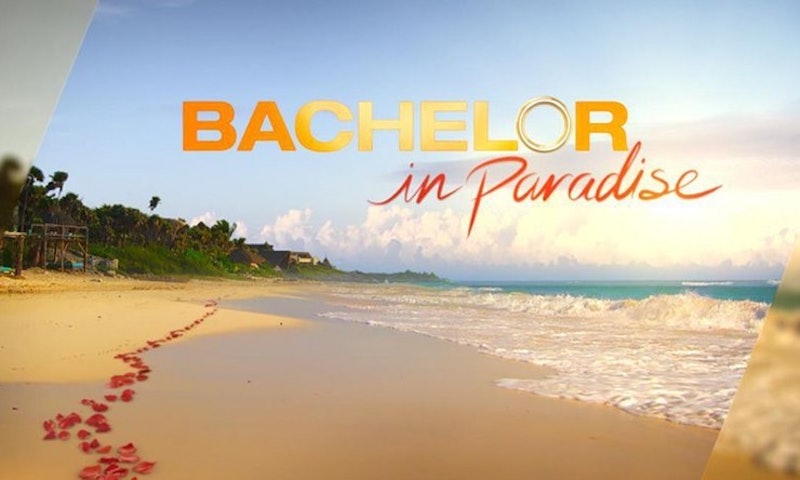 Amidst all the rumors flying around, when Bachelor in Paradise Season 4 starts filming again is still up in the air. If you're wondering why filming was suspended in the first place, let me catch you up on the incredibly serious allegations that are flying with regards to the production of this season.

According to Entertainment Tonight, filming stopped following "allegations of misconduct." Los Angeles Times reporter Amy Kaufman tweeted she was informed that this was because two contestants were allegedly drunk on the first night of filming, the pair reportedly got into the pool, and she claims things allegedly "turned into soft core porn," though she clarifies that they reportedly did not have sex. Her source claimed that a producer filed a "third party complaint," and she also claimed that the producer is now allegedly suing the production for misconduct over what she reportedly witnessed. Bustle has reached out to ABC for comment, but has yet to receive a response.

Update: On Monday, TMZ reported that sources allegedly close to the female contestant have been told that she was reportedly "in a blackout state" during the alleged incident and "remembers nothing." In addition, the sources also claim that she "doesn't fully blame DeMario because he too was drunk." A statement directly from the contestant herself has yet to be given.

Update #2: In a video posted by TMZ, Jackson says "no comment" in response to numerous questions about the alleged incident. Asked if he's upset about reports alleging that Olympios claims she did not give consent, Jackson responded, "No, no. I'm all good."

Earlier: Since Reality Steve tweeted on June 11 that the cast was being flown to Houston, this implies that filming isn't just going to stop for a day or two, because flying this many people from Mexico to Houston only to fly them back again the next day doesn't make sense time or budget wise. Theoretically, it could even suggest that the show may be canceled. After all, Warner Bros.' official statement on how they were proceeding was vague and non-committal about what action they would take.

"We have suspended production and we are conducting a thorough investigation of these allegations. Once the investigation is complete, we will take appropriate responsive action.”

Still, despite the sheer number of Twitter users assuming that Bachelor In Paradise is canceled, there does remain some hope. Entertainment Weekly claims otherwise, stating that a "network source" has confirmed to them that "the show has not been canceled."

At this point, prior to the formal investigation, all we can do is speculate; presumably if the situation is serious enough to warrant a third party complaint, it seems unlikely filming will resume over the next few months.