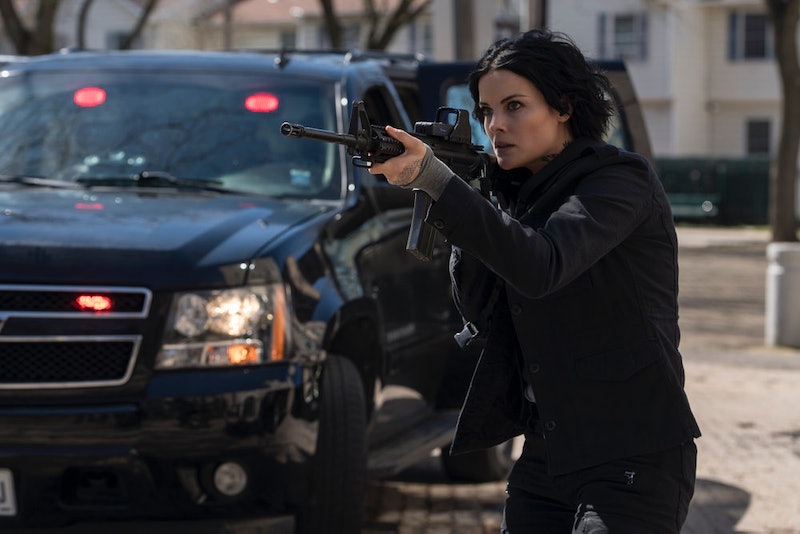 The second season of Blindspot answered a lot of the series' biggest questions and provided the conclusions to many of its mysteries. So, now that Jane's tattoos, Kurt's political future, and Roman's missing memories have all been explained, when will Blindspot return for Season 3? According to Deadline, Blindspot has been renewed by NBC already. Presumably, the series is destined to return this fall.

EARLIER: Unfortunately, though the series' big reveals were very satisfying and surprising in the moment, providing the answers to the mystery of Jane's tattoos coincided with a dip in the ratings. According to TVSeriesFinale, the Blindspot Season 2 ratings went from 1.5 million in the 18-49 bracket from the season premiere, to only 0.83 for the penultimate episode. However, NBC still believes in the series, though it was moved from the post-Voice Monday nights to Wednesdays, which may have contributed to the ratings dip, as could the somewhat erratic schedule (which you can also see in TVSeriesFinale's breakdown).

If fans are tuning out because so much has already been revealed, that means that Blindspot Season 3 will need to make some big changes and introduce some new conflicts in order to keep things fresh. What will those conflicts be? That's not going to be clear until the next season out, but knowing where the season finale is heading, here are some theories about Blindspot Season 3.

Could Jane Get Her Memories Back?

At this point, Jane is being ostracized for her behavior from before she lost her memories. A new shot in the arm for the series could be to finally give her her memories back to find out if she's still sincerely committed to destroying the government, or if her new friendships can bring her back to fighting for the good guys.

A good drama needs to make sure its antagonists are really threatening. If Sandstorm is able to take over, they could become a lot more serious. Already, they've taken out two major government buildings and seriously injured badass Zapata — Shepherd is a lot closer to destroying the FBI and maybe even the whole government than she seems.

Should Weller Take A New Job?

Could Kurt Weller officially be one of the cogs in the COGS machine? Crazier things have happened on Blindspot. It's certainly unlikely that he'd hook up with Shepherd and join her circle, but maybe that could make for a surprising third season.

Reade is on his way to Quantico, and turning him into an antagonist who no longer wants to stick up for the little family Jane, Weller, and their team have built could be an exciting way to make the crew beset on all sides, both extralegal and official.

He's betrayed, he's angry, and he's a pretty bad guy. But the new amnesiac Jane is probably the only person who truly understands how badly he was treated. (The same thing happened between her and Oscar, remember.) So, could the finale or a Season 3 episode start moving him in a more heroic direction? It's possible.

After Kurt's father died and Jane's real identity was revealed, the whole "who is Taylor Shaw" mystery was dropped. But it's been a nagging reminder that maybe Blindspot's conspiracy isn't that tightly woven — so maybe the show should address the real truth behind what happened to her.

Blindspot could be turning a corner when the thriller returns, likely later this year.