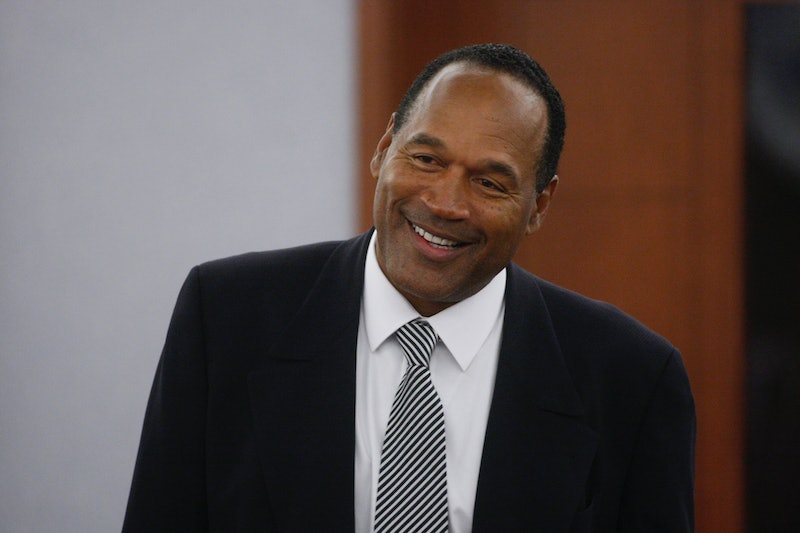 With a much-anticipated televised parole hearing set for Thursday, there is a definite possibility that O.J. Simpson could be released from the Nevada prison where he's been since 2008 for an armed robbery. But if he's paroled, when will Simpson walk free?

As The New York Daily News reported in late June, the one-time Heisman Trophy winner and controversial True Crime figure could be out of jail as soon as October 1, provided his hearing goes well with the panel of four parole board commissioners in Carson City, Nevada. And, so far, those close to Simpson like his odds.

Yale Galanter, Simpson's former lawyer who represented him following the robbery arrest, told the Daily News that, as Simpson has been "a model inmate," it seems super likely that he will walk:

It’s based on his behavior in prison and that certainly hasn’t changed. He’s been a model inmate. He’s had no write-ups, no disciplinary issues. By all accounts, he’s totally abided by the rules.

Simpson was convicted of 12 counts that included armed robbery and kidnapping. Ultimately, he was sentenced to serve nine to 33 years at Lovelock Correctional Center. During the trial, Simpson said he was recovering sports memorabilia that belonged to him.

Simpson's 2008 sentencing came on the 13th anniversary of his famous acquittal for the stabbing murders of his ex-wife Nicole Brown Simpson and Ron Goldman in 1994. Despite his acquittal all those years ago, interest in Simpson's story hasn't waned over the years. In addition to appearing throughout pop culture, the case garnered even more attention over the last year with the debut of both an award-winning documentary and anthology drama series dedicated to the trial.

The New York Post reported on Tuesday that Bruce Fromong — one of the two memorabilia sellers who alleged Simpson and two others burst into his hotel room in September 2007 to steal items he was preparing to sell — said that the former Football star deserved to go free by now.

However, Simpson's upcoming hearing, which is set to air on ESPN and NBC News, has still managed to attract widespread interest. For Galanter, the "hype" has more to do with Simpson's infamous history than the crime he's currently serving time for. As he told the Daily News:

The people that are making this decision are part of the legal system. The hype is about the murder charge and the legal system found him not guilty. The law said he didn’t do it.

While Simpson's lawyer seems confident that he'll be leaving prison this October, Thursday's hearing isn't likely to end the enduring curiosity and cultural obsession with his case.