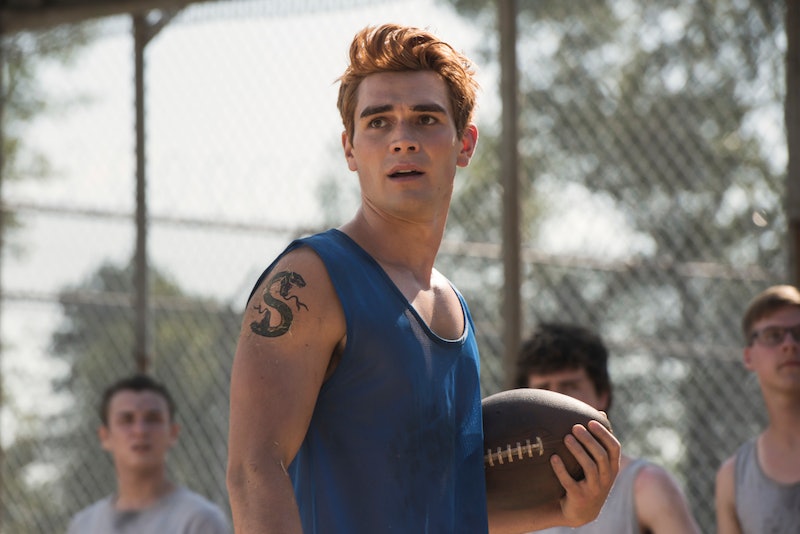 Spoilers for Riverdale Season 3 Episode 6 ahead. Kevin and Archie had a fun, albeit tragic, adventure this week, but by the end of Riverdale's Nov. 28 episode, our intrepid delinquent has teamed back up with his number one. The only lingering question? (Well, OK, one of many). Where are Archie and Jughead going? Despite Veronica's successful efforts to exonerate her beau, he skipped town in the most wholesome/Archie Andrews way possible: following the railroad right out of town.

First and foremost, at the end of the episode, Archie leaves Veronica. He's gone full Harry Potter, Peter Parker, Bruce Wayne, and Edward Cullen combined by breaking up with Veronica to "protect her" or whatever because death is "following him" or whatever. It's a tired trope, and there are about a dozen or so more examples in pop culture, but not a surprising one for Archie to fall into on Riverdale. Varchie is over, at least for the time being. Archie also wrote a letter to his dad, presumably telling him that he was ditching town.

Jughead's going too, though his call to Betty does not go through, obviously, because she gets carted off to the Sisters of Quiet Mercy after Alice makes a rash decision to leave FP Jones and her life in Riverdale behind by escaping to the Farm with Polly and the twins. Jughead's not letting Archie out of his sight, he says, so they're truly on the road together. He's not just helping his pal(adin) escape.

"Ever hop a train before?" Jughead asks Archie. "Don't worry, we'll figure it out." Did he just give up on trying to ascend and take down the Gargoyle King? Is this some kind of trap? This turn of events happened way too fast.

As for their destination, Archie and Jughead were at a junction labeled "junction" when the call to Veronica was placed, which could be anywhere. We don't exactly know where Riverdale is, but the license plates on the show say they live in the "Sugar Maple State." That's not an official state slogan in North America, though the sugar maple is the state tree of Vermont, West Virginia, Wisconsin, and New York. Considering the proximity to Manhattan (and a reference to Rockland County earlier in the series), it's most likely that Riverdale takes place somewhere upstate.

Could they be headed to Greendale? Hold your breath, Sabrina fans. The magical town is just on the other side of Sweetwater River, and the Riverdale Season 3 has certainly been, ahem, chilling. Plus, the Sabrina holiday special hits Netflix on Dec. 14... just about a week after the Riverdale midseason finale. It doesn't even need to be a proper crossover. Greendale is where Miss Grundy moved, it's connected to G&G victim Ben Button, and they wouldn't necessarily have to bump into Ambrose Spellman or Miss Wardwell while on the run.

There is one other town in Archie comics that has not appeared in either Riverdale or Chilling Adventures of Sabrina at this juncture — Midvale, which canonically is where Josie and her Pussycats hail from. Maybe that's where the farm is?

Other than that, there aren't a lot of fictional places from the comics that they could be headed toward, but who hasn't dreamed of filling a rucksack and duffle bag then hitting the open... tracks... with their best friend? Honestly, if Archie and Jughead are hopping a train like a couple of Depression-era hobos, they may not even know where they're going. We'll all have to find out together.

More like this
Everything To Know About 'Only Murders In The Building' Season 3
By Gretchen Smail and Kadin Burnett
This 'Gossip Girl' Wardrobe Error Has Gone Viral On TikTok
By Alyssa Lapid
A New 'And Just Like That' Table Read Pic Confirms A Key Character's Return
By Jack Irvin and Grace Wehniainen
'RHOSLC' Star Jen Shah Refuses To Do A Post-Sentencing Interview With Andy Cohen
By Brad Witter and Jake Viswanath
Get Even More From Bustle — Sign Up For The Newsletter
From hair trends to relationship advice, our daily newsletter has everything you need to sound like a person who’s on TikTok, even if you aren’t.