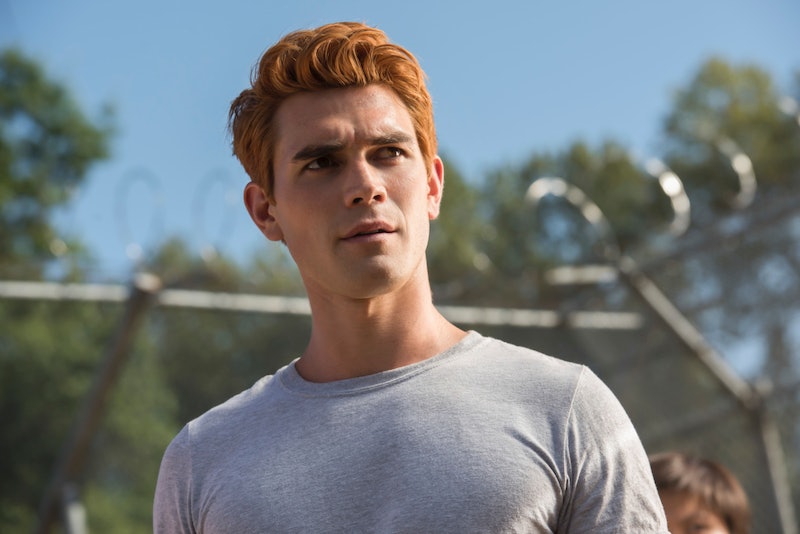 As Kevin Keller gleefully exclaimed in the Riverdale series premiere, "Archie got hot!" Here's thing, though: Archie did not get intelligent. With just a few seasons in existence, there are already 11 times Archie on Riverdale made you scream at your TV. Fans might love actor KJ Apa, with his Aussie accent and 40 million ab muscles, but his Riverdale character is just plain exhausting.

In his defense, though, teenage boys aren't known to be super-geniuses? And, to be fair, if anyone was going to be renowned for their decision-making skills on Riverdale, the only reasonable person left might be Pop Tate. So, actually, this argument works against him: In a world full of terrible decision-makers, Archie Andrews rises to the top.

Riverdale was a mid-season series, which meant Season 1 was an abbreviated 13 episodes. For most of those, Archie was defensive and noble, and a little headstrong — but you appreciated his boldness. It made him even hotter, somehow. But by the end of Season 2, most of his Riverdale sequences were enough to inspire ear-splitting shrieks from his biggest supporters. Archie did what? Why? What could have given him that idea? No one knows.

Archie doesn't think — he just does. Despite his most absurd moments — and there are many — it's weirdly hard not to love him.

Here are the 11 times Riverdale fans wanted to scream at Archie.

1. When Archie Put Ms. Grundy Ahead Of Jason Blossom

Way back in Season 1, it was revealed that Archie was hooking up with Ms. Grundy, a teacher at Riverdale High. Being weirded out by his obsession with her is iffy — she was a predator! — but the choices he made because of that were infuriating. For example: He didn't want to tell the police that he heard gunshots, possibly the ones that killed his friend and teammate, because it would spill the beans about their affair. Oh, brother.

He knew how Betty felt about him, and he still kissed the new girl — who was also Betty's new friend! Come on, dude. Could you be any more of a teenage guy?

Honestly, like, it's nice to have a pal to comfort you after some terrible news, but maybe don't smooch them when they're not in a great place and also a noted gossip can see.

4. When He Let The Blossoms Push Him Around

Remember that whole maple-tapping ceremony? And the Blossoms' secretive drug empire? As Entertainment Weekly pointed out, this entire episode felt like the family overtly trying to Vertigo sweet Archikins. Why does it take him so long to notice?

5. Archie Punching Through The Ice

It was heroic, but terrifying! Looking back, it's hard to believe there was a time the Andrews boy did normal things to save people and they actually worked out.

6. When Archie Teamed Up With The Lodges

Archie Andrews, you sweet, summer child. Hiram's a gangster, and Hermione's smarter than he is! You have loving, caring parents, a lovely girlfriend, and a good support system with your friendships. Why must you be this way?

Every part of their nebulous relationship deserves its own list. The poker game? Papa Poutine? Asking Veronica about his gun? Lying to the FBI guy that turned out to be fake? Seriously, every aspect of this plot was stone cold nuts. And it only led to worse things. Not to mention, his pledging loyalty to this Lodge syndicate felt kind of extreme — and hurt his father!

7. When Archie Accepted A Car From The Lodges

Oddly, out of all of his most uncomfortable Lodge-related decisions, this one stung the most. Fans know how important cars are to both Archie and Fred Andrews, and it's also something that bonds Archie with Betty. This was just so obviously a manipulation. One has to wonder why he couldn't, or wouldn't, see through that.

What's even left to be said about The Red Circle at this point? Best not to dwell.

9. Human Genius Archie Andrews Fighting The Southside Serpents, Several Times, Against The Advice Of Many

Has he ever taken the advice of someone else? Ever? In his life? Does he let anyone else's opinions, beliefs, choices, or experiences factor in to the decisions he makes in that moment? Oh, right, he's supposed to be 16 years old. So the impulsive nature of his actions kind of tracks — even if you just want to put your foot through the television and kick him with it.

More than once, before teaming up with them, Archie went directly against the Serpents: His crew tried to literally fight them, and he called the police on the illegal race, for example. It's like he's never even heard of the national no-snitching policy — or what happens to those who violate it.

Dude twisted himself into pretzels to convince himself he was responsible for a murder that he knows he wasn't. He has done plenty of not-great stuff — like beating the crap out of Nick St. Clair, or hunting the criminal that shot his father — but he definitely didn't do the real thing he went to jail for. A guilty conscience is one thing, but pleading guilty against the advice of friends, family, and counsel because you feel bad? What???? Archie!!!

11. When Archie Punched The Guard In Prison

Oh no, baby, what is you doing?

Honestly, there are endless "Archie, why?" moments on Riverdale, and these are just a few of them. It helps to know that he's generally motivated by good intentions, too. Like when he joins the wrestling team to impress Veronica's dad, or the prison fight club to save Joaquin, or accidentally breaks up Josie & The Pussycats because he liked Valerie so much and had no idea how to be a boyfriend. (Okay, so maybe that last one isn't so hot.)

At any rate, yelling at Archie Andrews is often the most cathartic part of Riverdale — even if it wasn't meant to be that way. It's a wild show, and not chilling out any time soon! So when you need an emotional release, come on back to this list and let it all out.