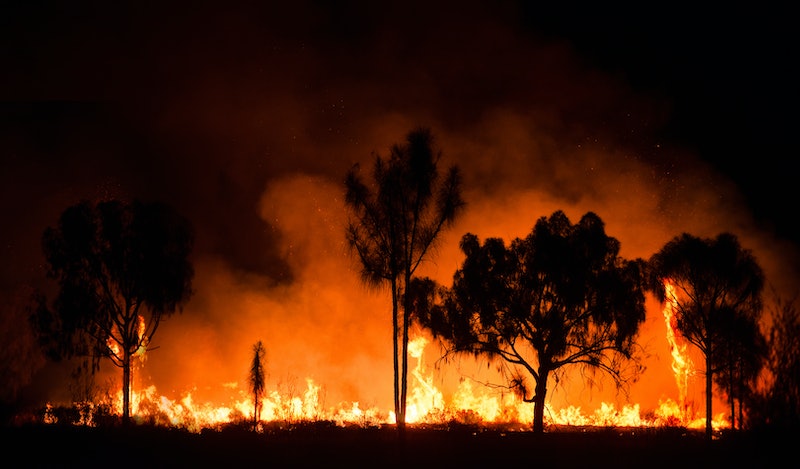 The most catastrophic Australian wildfire season in decades continues burn through millions of acres, increasing death tolls and destruction rates to a devastating degree. And while reports depict the entire costal perimeter of the continent in a state of even emergency, a map of where the Australian wildfires are currently burning show that some states and territories are far more affected than others. Many of the fires are concentrated in the eastern and southern coast of Australia which is where most of the population resides (Sydney and Adelaide). This means that thousands of residents have had to evacuate their homes and towns, fleeing inland as firefighters work around the clock to contain the remaining 54 of 130 bushfires that rage on.

According to the BBC, as of Monday, the fires, which have been burning since the beginning of September, have taken the lives of 24 humans and an estimated 480 million animals. The combination of an ongoing draught, soaring temperatures and low humidity created a volatile atmosphere, conducive to this level of environmental trauma. While some fires have been "controlled" the forecastable weather implies that the fires will continue to spread, and air quality will worsen, affecting even those that are safe from fires or embers.

Here's a breakdown of how Australian states and territories currently stand against the wildfires.

According to the BBC, the fire here has burned through 12 million acres, destroying more than 1,300 homes and displacing thousands of residents. Nearly 140 fires continue to burn in this state, making it the most intensely affected area. According to The New York Times, the last time Sydney experienced a fire of this magnitude was in 1974.

Next to New South Wales, Victoria is the second most affected state with 30 fires currently burning according to The Guardian, with over 2 million acres that have been destroyed. The Herald Sun reports that 200 homes have been ruined, and while the evacuation has been temporarily revoked and while people can return to their homes to retrieve belongings or check on the structures, the state is predicted to see more damage and more evacuations later in the week.

The state of Queensland has 33 bushfires burning, with over 600,000 acres destroyed. According to ABC 7, 50 homes have been devastated. Currently, Queensland has revoked their fire state of emergency, still residents struggle with air quality and the threat of worsening conditions later in the week.

In Western Australia, though fires are less dense, there are still more than 35 bushfires burning, with nearly 4 million acres of land destroyed.

The Guardian has reported that South Australian fires are worsening on Kangaroo Island and a fire ban has been put in place. According to 7 News, there have been nearly 100 homes destroyed and close to 20 fires still active.

ABC reports that Tasmania is currently dealing with a lot of smoke issues, as current fires creep towards a count of 30. All residents of Tasmania must get a permit to use fire and have been warned that conditions are expected to worsen mid-week.

According to 7 News, Northern Territory has seen the least devastation so far, with only 5 fires burning and a handful of homes destroyed. As fires spread and with the forecast of more dry, hot weather, residents remain on alert.

A state of emergency has been declared for the nation's capital, as smoke from the New South Wales fires has become a health and safety issue. All government offices and children's services in Canberra are currently closed as air quality has been deemed a too dangerous. ABC reports call it some of the "worst air quality in the world," going on to say that any air quality with an index higher than 200 is considered hazardous, while Canberra exceeded 4,400 in north Canberra on Sunday evening.