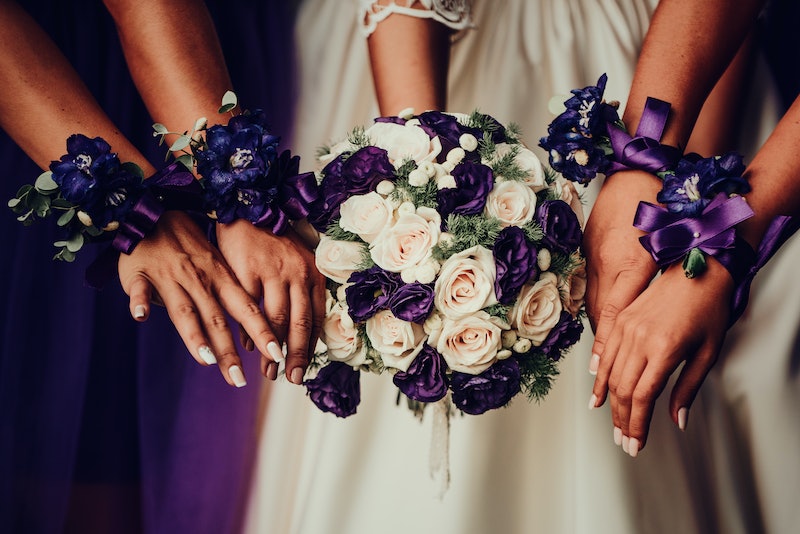 If you've ever been asked to be a bridesmaid, you know that it can be a pretty big commitment. To some extent, you are there to be the foundation of emotional support to your friend or family member, which is, even if stressful, usually kind of an honor. But where did bridesmaids come from, anyway? Why the line of pals behind a bride? Well, the history goes back pretty far, in fact, and some of the reasons a bride has a crew of peeps are pretty weird. And indeed, some of them were extremely sexist.

According to Mental Floss, the tradition of having bridesmaids goes way back to Ancient Roman times — the law at the time required for 10 witnesses at the wedding. This is thought to be the seed that planted the bridal party tradition. And when bridesmaids did start being a regular part of the ceremony, the reason that they had to dress similarly (and at the time, dress like the bride) was to literally ward off ghosts and demonic spirits. Didn't want any evil getting at that happy couple, you know?

The maid of honor was also supposed to be women who had a respectable standing in the community, someone who represented "fidelity and obedience" and the upholding of qualities considered important in a wife, perhaps thinking that the bride would receive these qualities by osmosis. More than just a close friend or beloved family member, the woman was a role model.

Mental Floss also reports that there is a Biblical root to the whole thing. When Jacob, regarded as a Patriarch of Israelites, married his two wives — count 'um, two — Leah and Rachel, both women brought their maids. Perhaps this is also where "bridesmaid duties" began? Although they probably didn't plan a friends weekend in Cabo or anything.

There is also evidence, going back to Ancient Rome and Feudal China, according to Reader's Digest, that suggests because it was not uncommon for a bride to have to travel a very long way to the town where the groom lived in order to get hitched, she needed a pack of people to help protect her. With a bunch of women all dressed in pretty similar outfits, it made it more difficult for "rival suitors" or bandits to get at the bride. Apparently, that was a danger back then.

Then of course, there is the question of where the sometimes cringe-worthy matching dress tradition came from. According to Wedding Wire, the first instance of this was said to be at the wedding of Queen Victoria wed Prince Albert in 1840, where all the women in the bridal party all wore matching dresses very similar to the bride. Then the main goal of bridesmaid costumes was to not take away from the beauty and illumination of the bride. It's her day! Luckily, the tradition has shifted a bit, and it's more likely that the people in the bridal party get to choose what they wear, or at least don't have to wear totally terrible ensembles.

Another great evolution in the whole bridal party thing? Well, you can have anyone you darn well please behind you, and the audience shouldn't bat an eye. No matter the gender identity of the individuals in the group, you can just choose the people you want to stand behind you, because traditions that discriminate by gender are obviously lame and need changing.

As for at least one other tradition that has passed behind, Brides.com sites George Monger's book Marriage Customs of the World, which describes how apparently all the women in the bridal party were also wearing garters believed to be lucky, love-filled tokens that possessed magical qualities. Men in attendance often creepily attempted to pull them off and would then pin them to their hats. Pretty glad that practice has made an exit.

So the next time you are at a wedding know that you are witnessing, or participating, in a very old custom. And if you're planning your own big day, you can make it all your own!