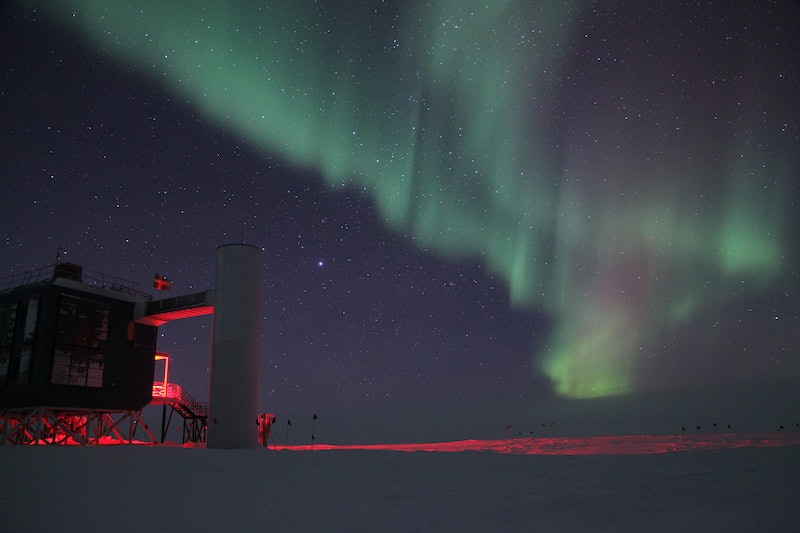 There's a lot about the potential of life in galaxies far, far away that humans are still struggling to understand. One of these mysteries is the origin of the elusive ghost particle. After more than 100 years of research, astronomers and astrophysicists may have finally discovered where ghost particles come from. Most ghost particles, known as neutrinos, travel to the Earth from the sun, Mike Wall reported for Space.com. However, some ghost particles make a much longer journey.

A major breakthrough over a century in the making at the IceCube Neutrino Observatory at the South Pole in Antarctica has traced one ghost particle to "a huge elliptical galaxy with a fast-spinning supermassive black hole at its heart," also know as a blazar. Wall also explained that ghost particles travel with cosmic rays, energetic particles that slam into Earth.

The research was published in two articles in Science magazine, and suggests that "blazars may indeed be one of the long-sought sources of very-high-energy cosmic rays." If you want to get into the nitty gritty details (you might beed a Ph.D. in astronomy or astrophysics to decode them), head over to the reports by Science, which you can access by following these links: neutrino emission and multimessenger observations.

The quick and dirty version is that the source of high-energy cosmic rays have long been thought to be extragalactic, which means that they do indeed originate from a galaxy far, far away. Perhaps one where Star Wars Jedi knights are actively batting the Dark Side.

The findings provide preliminary evidence that we're not alone in the universe. "The coincidence of an IceCube alert with a flaring blazar, combined with a neutrino flare from the same object in archival IceCube data, pinpoints a likely source of high-energy cosmic rays," Science explained.

While we often toss around the term "black hole" in everyday conversation — as in "that email got lost in a black hole — black holes, or blazars "are a special type of superluminous active galaxy that blast out twin jets of light and particles, one of which is aimed directly at Earth," Wall explained on Space.com.

Researchers noted that multimessenger astrophysics, using two different signals to study the cosmos, could help further unravel the mysterious of the universe, which have stumped astronomers and astrophysicists for over a century.

'"Since they were first detected in 1912, cosmic rays have posed an enduring mystery," a press release from the National Space Foundation noted. "What creates and propels them across vast distances before they rain down on Earth? Where do they come from?" That question is finally on its way to being answered thanks to the dedicated teams from 20 observatories credited with participating in the discovery.

"The era of multimessenger astrophysics is here," NSF Director France Cordova said in the press release. "Each messenger — from electromagnetic radiation, gravitational waves and now neutrinos — gives us a more complete understanding of the universe and important new insights into the most powerful objects and events in the sky."

The IceCube Neutrino Observatory at the South Pole further proves researchers' dedication to unraveling the mysteries of the universe. Because, the South Pole is not the kind of place you choose to hang out on a whim. "The NSF-managed USAP built and maintains the IceCube observatory in one of the world's harshest environments," the press release explained.

"The need to ship all of the components to build the detector in the holds of military cargo aircraft, as well as the development of hot-water drilling techniques required to install instruments into the ice sheet, make NSF's IceCube, which became operational in 2010, the culmination of a uniquely challenging scientific and logistical endeavor."

This just might be the evidence Scully needs to believe once and for all that Mulder was right about the X-Files. The truth is out there... and it is indeed hiding in a galaxy far, far away.