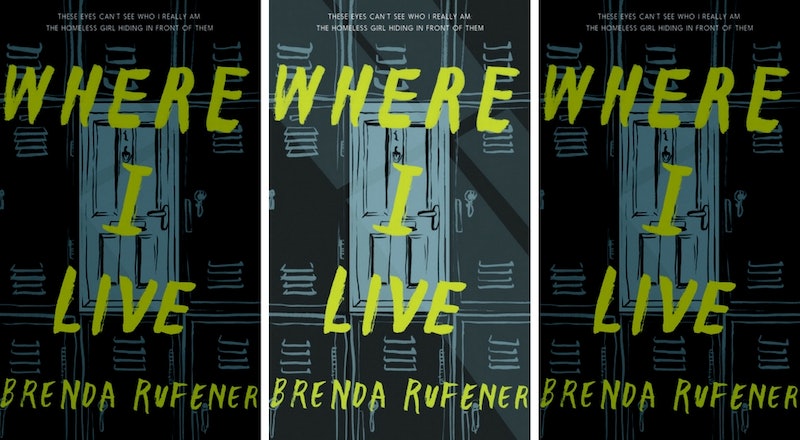 High school is hard for any teenager, but for young people facing poverty, food insecurity, and homelessness, growing up is a daily fight for survival. It's a painfully isolating experience debut author Brenda Rufener knows first-hand — and one that she drew from to write her powerful young adult novel, Where I Live, out now from Harper Teen.

"Growing up as a young teen, my own family went through a stage of housing insecurity, and for a short time, we were essentially homeless. We weren’t on the streets, we were shuffling from relative to relative. We were waiting for rentals to come up we could afford, and money was always an issue. We stayed with relatives, slept on couches, and weeks turned to months," Brenda Rufener tells Bustle of her experiences as a young adult living in poverty. "I remember friends wanting to come over to hang out, and I always had to say no because I was embarrassed at the fact I didn’t have my own room. My situation definitely wasn’t as severe as a lot of situations are, but I was able to draw from some of that, to pull from those emotions and insecurities and personal experiences I had as a poor teen living on the brink of homelessness."

Where I Live follows Linden Rose, a teenage girl who secretly lives in the halls of her high school. Homeless and alone after losing her beloved mother and a grandmother she barely knew, Linden's only support system is her makeshift family with her friends, Ham and Seung, but even they don't know the truth. Determined to make sure her true self stays hidden, Linden lives her life by a certain set of rules, but when a girl from school comes in showing signs of abuse, she must decide what is more important: saving her secret, or saving someone else.

Where I Live by Brenda Rufener, $18, Amazon

A frank and emotional portrayal of a very real, very prevalent, but often unspoken problem in the United States, Where I Live is long overdue in the young adult world. In tackling homelessness head-on, Rufener's story pulls back the curtain on the largely misunderstood issue to reveal that, contrary to popular belief, it isn't a simple circumstance of laziness, addiction, or mental illness. It is a heartbreaking position that many innocent and unwitting young people are forced into every day — many people who, like the book's protagonist and the teens Rufener worked with that helped inspire her character, have an unimaginable capacity for resilience.

Despite the fact that more than two million American children experience homelessness every year, the topic is rarely at the forefront of public conversation, let alone a subject covered in school. To many teens living with poverty or housing insecurity, it can feel like no one understands their struggles, when the fact is they are far from the only ones experiencing the fear, anxiety, and uncertainty of day-to-day living. For a lot of them, including Rufener, books become a beacon of hope, and a source of strength.

"They gave me hope," she says of her childhood spent at the library reading books like Are You There God? It's Me, Margaret. Although there were no stories about young girls facing the same circumstances the author found herself in, there were plenty of narratives that offered Rufener an alternative experience. "I saw a different journey, a different path I could take."

Rufener hopes that teens not unlike herself find hope and strength in the pages of Where I Live, but the debut author is optimistic her young adult novel has something in it for everyone, even grown-ups.

"I hope adults find their way to my book, I really do. I think there is so much to be learned from YA," Rufener says. "I think that we can always gravitate towards something in the YA novel, whether it is to learn something, to be taught something, or we can go back to our childhood and experience something like a re-do, so to speak. We can meet characters that we wished we would have know back in the day. I am a huge advocate for YA for everyone."