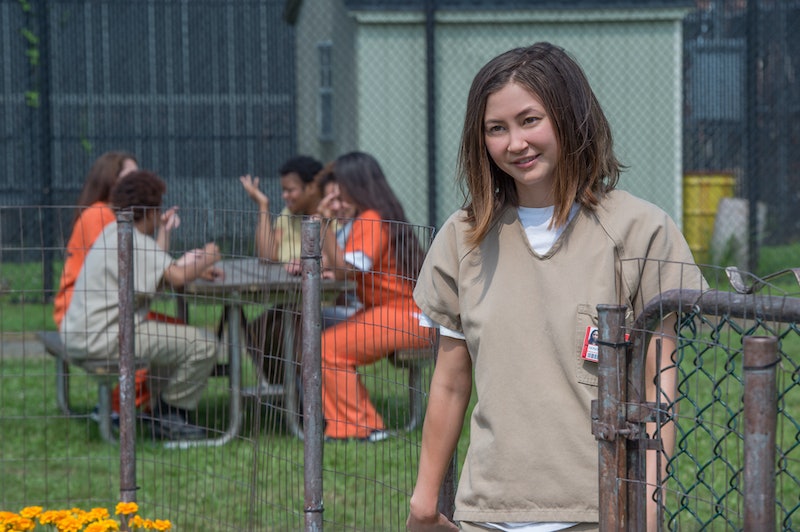 Spoilers ahead for Orange Is The New Black Season 7. Over the course of seven seasons, Orange Is The New Black has woven a tapestry of characters so rich and intricate, there's not enough time for the final season to provide an extended look at where all of them have ended up after Litchfield. It does, however, at least offer some closure for most of them — including Brook Soso, who we haven't seen since the events of Season 5's riot. In OITNB Season 7, Brook doesn't make an appearance until the show's final moments, but we do get a brief check-in before saying goodbye to the character for good.

The last time OITNB fans saw Brook, she was in a pretty bad way. She first came to Litchfield in Season 2 and immediately drew the attention of Big Boo and Nicky, who both attempted to seduce her, though only the latter succeeded. Beyond that, Brook's time at Litchfield was filled with tragedy. The stress, isolation, and loneliness of being in prison began to take a toll on her emotional well-being, a matter which her assigned counselor, Healy, had little sympathy for. After attempting to overdose, she was saved by Poussey, Taystee, and Suzanne, who welcomed her into their friend group. Over the course of Season 4, Brook and Poussey formed a romantic relationship, which brought some happiness to the two of them but came to a heartbreaking end with Poussey's death in Season 4, leaving Brook lost, alone, and grieving during the Litchfield riot up until she was evacuated from the facility at the end of Season 5.

OITNB Season 7 doesn't provide any updates on Brook until the final minutes of the series finale. We see her in an indistinct, snowy prison yard, although it's likely that she's in the same Ohio facility that Big Boo, Yoga Jones, and other former Litchfield inmates are seen in moments before. Brook is shown strolling along a path outside, surrounded by Janae, Alison, Leanne, and other inmates that were evacuated following the Litchfield riots. Brooke appears to have reverted to being lonely and withdrawn, until Sankey approaches her.

Sankey was introduced in Season 4 as a member of a white supremacist group within Litchfield, but over the course of Season 5, she began to soften her views. While she still isn't mindful enough to know not to call Brook "Asia Girl," she displays how much she's grown by reading a vulnerable haiku to Brook to communicate that she likes her. The poem, simple though it may be, gets Brook to crack a smile, and the two walk alongside each other as snow continues to fall.

Brook may still be in prison, but her final scene in OITNB shows there's hope yet she won't have to serve out her time completely alone. Just as she found a connection with Poussey, Taystee, and Suzanne that kept her from feeling lonely, she can continue to find those connections as long as she is open to forming unlikely friendships.