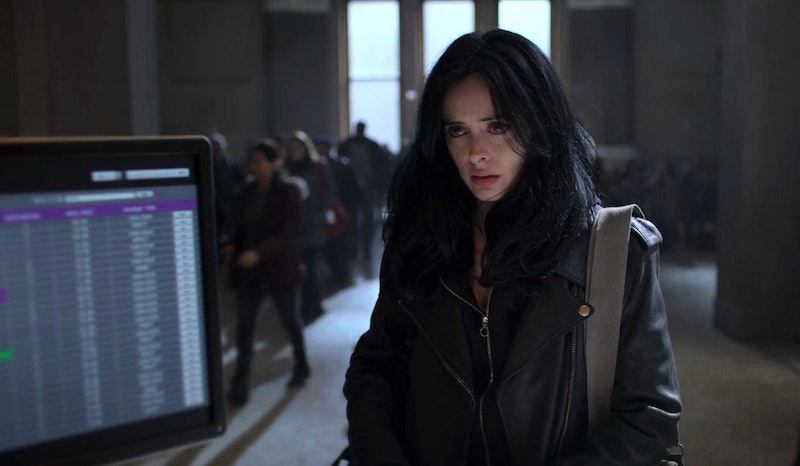 Spoilers for Jessica Jones Season 3 ahead. While it's not every heroic to run away, Jessica Jones very seriously considers doing just that at the end of the final season. Mexico is where Jessica is going in the Jessica Jones finale, but her plan is foiled when she hears the voice of Kilgrave again. Unlike in the past, Kilgrave doesn't seem to be really in Jessica's mind. But instead, she channels her past tormentor to remind herself that she is a "bonafide hero" (that's what the newspapers are saying) and heroes don't run away.

Trish is really Jessica's only family. And so when Jessica feels forced to turn her sister and best friend in to the police, she's understandably upset. In "A.K.A. Everything," Jessica says goodbye to Erik, hands over the Alias Investigation keys to Malcom, and sends off Trish to prison before she heads to the train station. She asks the teller at the station to get her as closest to Mexico as possible. But as he's handing over the one-way ticket from New York to El Paso, Texas, Jessica has a change of heart. "Hey, don't you want your ticket?" the teller asks. And while she doesn't say a word, Jessica's face says it all. She's not going anywhere, she's staying right where she belongs on the streets of New York fighting crime.

Jessica's plan to go to Mexico may have stemmed from the fact that she and her mom Alisa tried to cross the U.S.-Mexico border in Season 2. But Jessica has no need to flee the country because she's not wanted by the law. Rather she just wants to leave everything and everyone behind and getting out of the country feels like the right solution.

But that changes when the memory of David Tennant's Kilgrave pops into her brain at the train station. His signature purple color takes over the one-way ticket leaving New York and Kilgrave's voice purrs at her, "Jessica, you're right to give in. Give up. It's someone else's job now."

Jessica's decision to stay comes directly from this reminder of evil that exists in the world. Kilgrave had trapped Jessica using his mind control and had her do horrific things, like kill Luke Cage's wife Reva. She suffered PTSD from the abuse that Kilgrave perpetrated on her and also because of the guilt she suffered over the things she did when she was under his control. Now, with Kilgrave gone, she has the power to choose her own destiny. It just takes a little prodding from her past to make her remember that.

Jessica has always struggled with being a "hero." But the third and final season has Jessica leaning into this role and accepting all the consequences that it entails. Sure, the loss of Trish understandably made her doubt her hero status and her instinct was to flee. But Jessica has learned to deal with her past and look to her future over the course of Jessica Jones. So instead of fleeing, like she would have done before, she decides to stay. And thanks to all the emotional progress Jessica has made over the course of the series — Le Tigre's "Keep On Livin" playing in the background — you know that she'll go on being the best superhero she can be on the streets of New York.