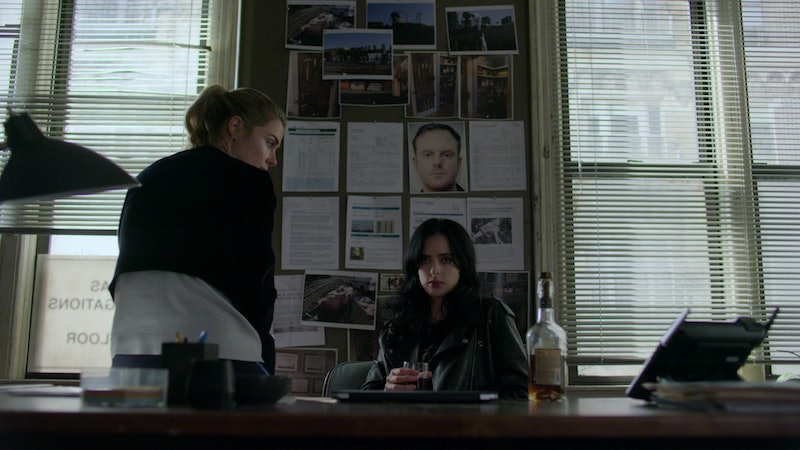 Spoilers for Jessica Jones Season 3 ahead. Jessica Jones and the rest of her Marvel Netflix superheroes have always been synonymous with New York City. But in the Jessica Jones series finale, Jessica almost leaves New York. That is, until the voice of Kilgrave enters her mind one last time and motivates her to keep being a hero in her city. Besides the thrill of David Tennant's vocal cameo and Jessica's choice to stay a superhero, the Jessica Jones ending also wraps up the stories of Trish Walker, Jeri Hogarth, Malcolm Ducasse, and new character Erik Gelden. And while some of them have bleak futures, nothing was ever going to be too hopeful at the end of Jessica Jones.

So here are all the questions that the final Marvel Netflix series answered during its ending.

Did Trish Become The Bad Guy?

After Trish kills serial killer Gregory Salinger at the courthouse, Jessica feels forced (with a little help from Luke Cage) to turn her best friend and sister in. Because while Trish thinks she has been doing the right thing by becoming a vigilante who kills bad guys, she was unable to see that she had become the bad guy in the process. Trish breaks so bad that she makes Erik's eyes bleed, so Jessica exposes the masked vigilante's identity to the whole world. And when Trish tries to flee the country via casket, Jessica stops her in order to show her who the true superhero in this situation is.

What Happened To Hogarth?

Jeri proves that she does have the capacity to love another person with Kith. Unfortunately, one of the ways she showed that she cared was by siccing Trish on Demetri Patseras, who had been planning to sue and ruin Kith. But Jeri atones for this when she helps Jessica locate Trish to turn her in. However, these few good deeds can't erase years of selfish behavior and Kith leaves Jeri to die alone with her ALS diagnosis.

Do Jessica & Erik End Up Together?

Erik offers to work alongside Jessica to become a "bonafide hero" like her. But she rejects his offer of a professional and romantic partnership because she doesn't trust him.

Will Erik Really Work With Costa?

Although Jessica doesn't want to date Erik or be a hero with him, she does connect him with Detective Costa. Jessica has plans to get out of the city, so she sets these two up so that Erik can provide tips on who the real bad guys are to the NYPD. Erik does give Costa one tip at the bar, so this could be the beginning of a fruitful friendship. But since Erik is Mind-Wave in the Marvel comics, he might not always stay on the straight and narrow — even though he indicated to Jess that he wants to be a trustworthy person.

Trish has her cat-like skills as the masked vigilante Hellcat, but they are nothing compared to Jessica's strength as their final showdown highlights. And so when Jessica turns her in, Trish is arrested and she is sent to prison. But before she's helicoptered away, Trish realizes, "I'm the bad guy." She also seems to hold no resentment toward Jess since they acknowledge each other at the helipad. So maybe after she serves her time in jail (which is probably a whole lot of time based on her charges), Trish would use her Hellcat powers for good like her comic counterpart.

What Will Malcolm Do Now?

Jessica has plans to leave behind Alias Investigations. But before she goes, she stops by her neighbor Malcolm's place and hands him over the keys. "Don't screw it up," Jessica tells him and he seems to accept the responsibility. So while Malcolm's ex-girlfriend Zaya questions his "good guy" status, he might work to do the right thing with Erik's sister Brianna/Berry by his side.

Jess with her duffle bag seems all set to get the hell out of New York City. She asks for a train ticket that will get her closest to Mexico. But she doesn't take the purple-tinged one-way ticket to El Paso, Texas, after Kilgrave's voice goads her. "Jessica, you're right to give in. Give up. It's someone else's job now," he says. And with his voice in her head again for that brief second, she chooses to "keep on living" as a hero in New York City.

With Jessica Jones canceled, fans will probably never see Krysten Ritter's superhero take on bad guys again. But at least she got to end things on her own terms in the series finale — because Jessica wouldn't have it any other way.