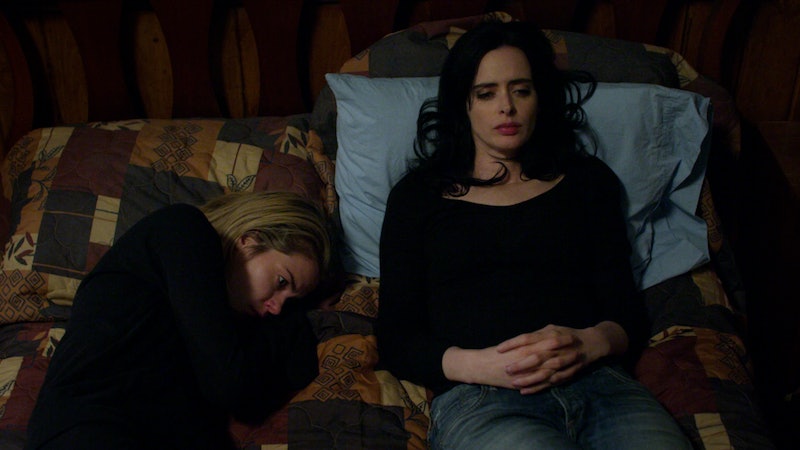 Jessica Jones doesn't excel at having close relationships, but one person who has consistently been by her side is her best friend and adopted sister Trish Walker. But in Jessica Jones Season 3, Jessica and Trish are understandably estranged after Trish murdered Jess' mom Alisa in the Season 2 finale. Despite their strained relationship though, showrunner Melissa Rosenberg and star Krysten Ritter tell Bustle that the friendship between Jessica and Trish is most significant relationship in all of Jessica Jones, so fans can expect these friends and sisters to have an end befitting that status when the third and final season premieres on Netflix on Friday, June 14.

At the start of Season 3, Ritter's Jessica and Rachael Taylor's Trish have gone a year without seeing each other. Rosenberg says this is much harder for Trish than it is for Jessica — which makes sense considering Jessica is forcing this separation. But the emergence of a new villain in the form of serial killer Gregory Salinger forces these two to come together again, according to Rosenberg.

"We finally get to see them really pair up," Rosenberg says. "This is a team, which I think both of them would love for that to work. But they have very different ideas. They define heroism very differently. And that can create some conflict."

But Trish and Jess aren't just dealing with their conflicting views on what makes a hero in Season 3. Ritter says in a separate interview that they also must establish a new normal since Trish killed Alisa. "What I've always loved about our show is how personal it's always been," Ritter says, citing how Season 1 was about Jessica facing her abuser Kilgrave and Season 2 was about the loss of her family. "Now we're dealing with her relationship with her best friend, which is as personal as it can get for Jessica. At the core, that's what our show has always been about — that relationship between Jessica and Trish. And Trish really f*cked it up," she adds with a laugh.

Jessica's mom Alisa seemed like the villain of Season 2 — and she certainly was the "bad guy" in Trish's eyes. Yet, beyond the emotional pull of discovering her mom was still alive, Jessica was able to see that Alisa couldn't simply be boiled down to "good" or "evil." So even though Jessica is working with Trish in Season 3, it doesn't mean she has forgiven her.

"I don't think it's about forgiving 100 percent or the feelings of betrayal going away. I think it's about finding the new way to exist given what's there now," Ritter says. "They're all each other has. So they find their way back and it's a new dynamic and things aren't the same and things won't be the same."

Although Jessica isn't entirely thrilled that Trish killed her mom, Ritter is ecstatic that her directorial debut is a Jessica Jones episode that focuses on Trish. "Getting to tell an origin story for a character is really exciting and I know Rachael so well. I know what she's capable of and I wanted her to be so cool," Ritter says.

Throughout all three seasons, Jessica and the artist formerly known as Patsy have shown how cool and capable they are. "I love that these girls are front and center of the story kicking ass and taking names and dealing with issues that have really high stakes. They never once talk about boys or fashion or beauty, ever," Ritter says. "They are the stars of the show. They're the stars of the story. They're not servicing anything else except for what's important to them."

The Don't Trust the B---- in Apartment 23 and Breaking Bad actress notes how she and costar Taylor have discussed how this is a rarity in an industry where they are usually relegated to "the girlfriend" or "the best friend" roles. "It's like you're always servicing something else and this is a show where the female friendship is what's being serviced always," Ritter says. "For me as an actor, getting to play opposite Rachael and just have that be the dynamic has just been such an incredible, exciting luxury."

As for where the friends and sisters will end up, Rosenberg ensures that the final season does them justice. "I feel like it's a great ride and a great deep dive into the friendship," Rosenberg says. "I think the friendship of Jessica and Trish is really the love story of the entire series. And this is the final ... exploration of that."

While Jessica and Trish's love interests may come and go, the bond that they have is strong enough to not only outlast the ultimate betrayal but to take on a serial killer in the final season. Because after all they've been through, these superpowered sisters are better together.