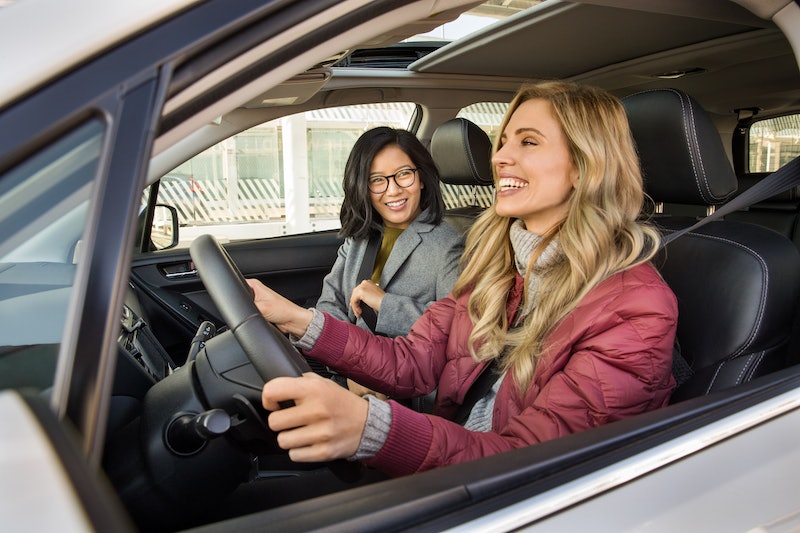 At the moment, Lyft is available in hundreds of U.S. cities — to approximately 95 percent of the population with presence in 50 states and statewide coverage in over 40 — and only made its international debut in 2017. Where Lyft is available outside of the U.S. isn't where you might think. Apart from the U.S., Lyft is only available to customers in Canada, and currently operates in Toronto and Ottawa. However, this list might be growing soon: The company has announced plans to expand its reach to another major city in Canada, one that actually has no ride-sharing presence at all right now.

“Outside of the U.S., Canada is our first and only international market, and we are thrilled to be operating in Toronto and Ottawa,” a Lyft spokesperson tells Bustle. “We are also excited to be the first major ridesharing company to have announced our intention to launch in Vancouver before the end of 2019."

With this news, that means outside of the U.S., Lyft will be operating in three major Canadian cities:

To date, B.C.’s government had not allowed ride-hailing companies to operate there. However, last month, Transportation Minister Claire Trevena revealed its regulations on licensing and insurance for ride-hailing. “British Columbians have been asking and waiting for these services after more than five years of delay by the former government,” Trevena said at the time, according to a statement by Lyft. “We took action to allow for the services people want and we’re delivering on that promise. Our plan has made it possible for ride-hailing companies to apply to enter the market this fall.”

According to Lyft’s 2019 Economic Impact Report, 47 percent of riders said they explore more areas of their city as a result of using Lyft. “So we can’t wait to bring our world-class transportation network to Vancouver, providing locals and visitors with the spontaneous and reliable ridesharing service they have been demanding for years,” the Lyft spokesperson says.

Lyft also appointed its first general manager in B.C., ​Peter Lukomskyj​ — he will lead operations, driver and passenger acquisition, and service quality. “I am thrilled to soon launch Lyft’s world-class ridesharing service in Vancouver, as part of our effort to positively contribute to B.C. communities,” Lukomskyj said in a statement. “We appreciate the hard work the BC NDP [New Democratic Party] government has done to allow ride-sharing in the province, and also want to recognize and thank the BC Greens and BC Liberals for their continued commitment and support.”

In addition to providing a reliable transportation option, Lyft tries to do its part when it comes to effecting positive change for cities by doing things such as offsetting carbon emissions from all rides and by promoting transportation equity through shared rides, bike-share systems, electric scooters, and public transit partnerships. The company also says it works to be part of the local community it’s in through programs like Round Up & Donate for SickKids Toronto, monthly Community Grants and partnerships with Pride Toronto, the Ontario Association of Chiefs of Police, TIFF, Casey House, Evergreen Brickworks, and more. Lyft plans to launch ​social impact initiatives in B.C., too, and will be the official ride-share partner of the Vancouver Canucks and Vancouver Pride.

For permission to operate in Vancouver, ride-hailing companies — including Lyft — will have to apply to the Passenger Transportation Board, which will also set guidelines when it comes to fares, boundaries, and the number of vehicles. Applications will be accepted starting Sept. 3. However, there’s a catch. Drivers will be required to have a Class 4 commercial driver’s license, which has stricter requirements — such as a higher driver’s test score — than a Class 5 license.

This may limit the number of drivers in the Vancouver area, Aaron Zifkin, managing director of Lyft in Canada, said in the company’s statement. “Ninety-one percent of the drivers on our platform drive less than 20 hours a week,” he said. These are people like single moms, students in school, and people trying to supplement their incomes. As soon as you introduce that Class 4 commercial license, these people tend not to apply for that type of work,” Zifkin said. Although Lyft would like to operate throughout B.C., based on the number of Class 4 commercially licensed drivers, Lyft will initially operate in the Lower Mainland communities, the company stated, where it can on-board enough drivers with the required license.

As for if Lyft will expand even more internationally, a company spokesperson says they’re in conversations with regulators across the country. “While we don’t have any other region to announce at this time, we are looking forward to bringing the benefits of Lyft to more Canadian communities in the future,” they say.

Meanwhile, if you’re interested in becoming a Lyft driver in Vancouver, you can learn more from Lyft’s website — and the company says it’s a good idea to begin the process of obtaining your Class 4 commercial license sooner rather than later. In any case, judging by Lyft’s popularity in America and Canada thus far, if all goes as planned, the rideshare app will likely find success in Vancouver, too.