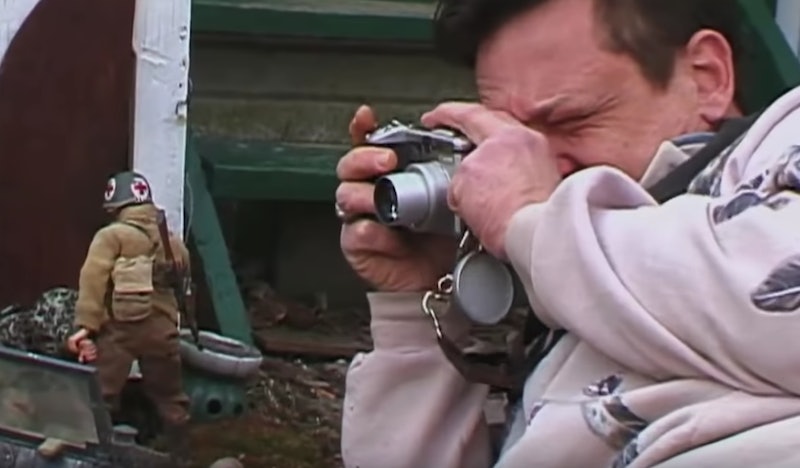 In the upcoming fantastical drama Welcome to Marwen, Steve Carell plays a real life person named Mark Hogancamp, who created a miniature world with dolls to recover from his trauma after being the victim of a hate crime. That crime involved a group of men outside of a bar in Kingston New York who'd physically attacked Hogancamp, reportedly after he'd revealed that he liked to wear high heels and nylons, according to The Guardian. That attack took place in 2000, and now in 2018 Mark Hogancamp is still photographing the miniature universe he's created outside of his home, called Marwencol, per a local news site, The Daily Freeman.

While Hogancamp doesn't have a role in the movie about his creative endeavor, which comes out Dec. 21, he does appear in a documentary made in 2010, titled Marwencol. But according to a report from the U.K.'s Telegraph, Hogancamp has been a part of the production of the new film that's depicting his land of dolls. Director Robert Zemeckis told the outlet that Hogancamp "gives updates in return on how the Marwencol in his back yard has continued to expand."

Marwencol, which Hogancamp created to resemble a Belgian town during WWII, may be the center of a new film starring big stars like Carell, Janelle Monáe, Diane Kruger, and Leslie Mann, but it seems like Hogancamp is continuing with life as usual. This past fall, a new gallery show of the photographs that Hogancamp takes of Marwencol opened up in Kingston. The show was aptly titled "Hogancamp's World," Daily Freeman reported.

While you might expect that being the subject of an award-winning documentary followed by a partly-animated film with major Hollywood stars — plus a book released in 2015 — might allow Hogancamp the financial freedom to move out of the trailer where he'd lived following the attack, it sounds like the photographer might not want to leave the place where he first created Marwencol.

A 2015 profile published by The New York Times described Hogancamp's daily routine as relatively unchanged from before even after the success of the Marwencol documentary. But Hogancamp has become more accepted into the art world since his photographs began appearing in galleries. Now, according to the Times, Hogancamp regularly attends gallery openings, sometimes wearing heels.

The 2000 attack left Hogancamp in a coma for nine days and caused brain damage and trauma that affected his memory. In his 2015 interview with The Guardian, the photographer and artist described how he'd felt dejected and hopeless after losing the ability to afford healthcare after he'd undergone physical therapy for a year to re-learn how to walk. Without help from necessary medical professionals, he turned to his imaginary world to help himself recover from the trauma. As Carell recently told The Hollywood Reporter, "He literally healed himself, he turned something very ugly into something really beautiful."

As terrible and heartbreaking as Hogancamp's story has been at times, it now serves as a compelling tale of the power of both one's imagination and self-healing abilities. When interviewed by the Times in 2015, the subject of Welcome to Marwen confirmed: "Things have gotten better, they have gotten as good as they’re going to get." Then he added, "Except my imagination. That keeps expanding."