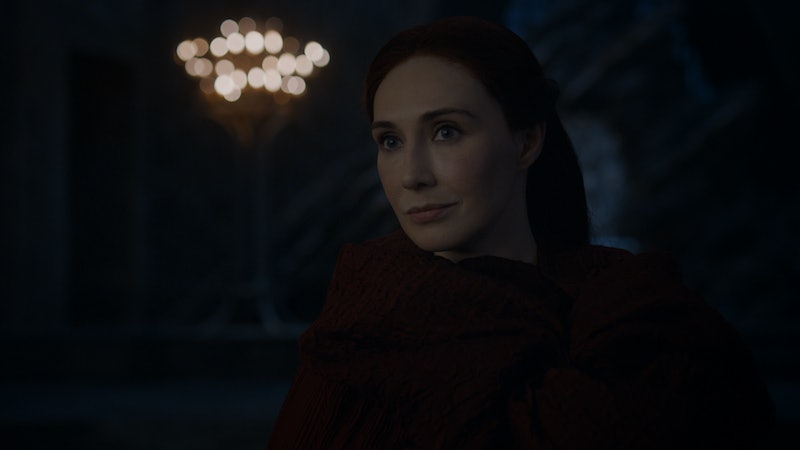 The Season 8 premiere of Game of Thrones was filled to the brim with reunions, but one crucial character was missing from the many meetings of Winterfell — although she's fully aware she won't be receiving a warm welcome. There's no telling exactly where Melisandre is on GoT Season 8 just yet, but audiences know that she'll be coming back eventually.

Melisandre's last few episodes on Game Of Thrones showed that she was interested in ensuring the survival of humanity in Westeros, but there doesn't seem to be anyone in Westeros interested in getting her help. She does the crucial work of introducing the Mother of Dragons to the King In The North, even though Jon doesn't like her. You might remember that he ended Season 6 telling her she'd be dead if she ever set foot in the North following the revelation that she talked Stannis into sacrificing Shireen to the Lord of Light. SO it makes sense she wasn't riding on into Winterfell with the rest of the cast in the premiere.

Melisandre isn't popular amongst nearly anyone, which may be why she revealed to Varys in Episode 3 of Season 7 that she'd be retreating to Volantis in Essos. While Essos may be safe from the threat of White Walkers, Melisandre has promised to return to Westeros, telling Varys that "I have to die in this strange country, just like you." Fans have't seen the Red Woman since she left for Essos, but Melisandre is likely going to return to GoT, even if it's just to die alongside many other beloved characters.

While she's destined to die, the work that Melisandre accomplishes during her semester abroad could prove to be valuable in the battle against the White Walkers.

The city of Volantis hasn't had an obvious presence in Game of Thrones, but the city has been mentioned various time across the series. Robb Stark's love Talisa is from Volantis, and minor characters mention either working in or being from Volantis throughout the show. Audiences finally witness Volantis first-hand in Season 5, when Tyrion and Varys visited and witnessed a Red Priestess preaching of a savior known as the Dragon Queen.

The prevalence of followers of the Lord Of Light in Volantis may offer an answer for why Melisandre hopped across the Narrow Sea. The show hasn't had many Red Priestesses, but many of the ones seen so far think that either Jon Snow or Daenerys Targaryen are chosen saviors and that it is the will of the Lord of Light that they rule Westeros. If Melisandre can recruit a collection of followers of the Lord Of Light, this can provide two major resources in the War Between The Living And The Dead — fire and rebirth.

Thoros of Myr and Melisandre have both brought people back from the dead, and a couple dozen followers of the Lord of Light with the power to resurrect people could level the playing field against the zombie army of wights. Additionally, the manipulation of fire showcased by followers of the Lord of Light could also be extremely handy in taking out wights and preventing the dead from re-animating under the control of the White Walkers.