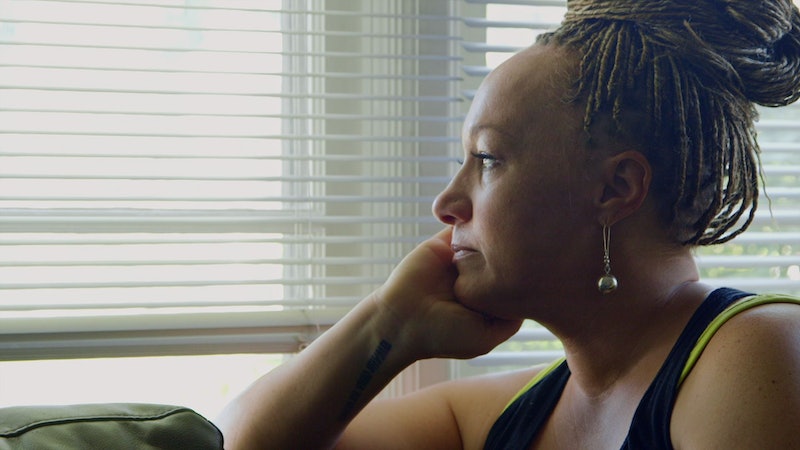 It's been nearly three years since Rachel Dolezal first burst onto the national scene and ignited a debate about race and culture. In 2015, it was revealed that Dolezal — who had been living her life as a black woman and serving as president of the NAACP chapter in Spokane, Washington — was not actually black. Dolezal was outed as white, and she caused controversy by stating that she identified as black. After the initial furor over Dolezal calmed down, she disappeared from the national spotlight, but will be reintroduced to the public in a new Netflix documentary that tracks where Rachel Dolezal is now in 2018.

The new documentary is called The Rachel Divide, a title that serves as both a reference to the phrase "racial divide" and a tip of the hat to the divisions caused by Dolezal's case. When her case became widely known, many accused Dolezal of cultural appropriation and insensitivity, with some — including her own brother — comparing her posing as a black woman to blackface. Dolezal and those who agreed with her, however, insist that she is "transracial," and claim that her identifying as a race other than her biological race is no different than a transgender person identifying as a gender that differs from their biological sex.

Before Dolezal was outed as white in June 2015, she was working as a civil rights activist for the NAACP and as a part-time instructor in Africana Studies at Eastern Washington University. But once the scandal broke, Dolezal resigned from her post at the NAACP and was fired from Eastern Washington University, according to the Seattle Times. After a subsequent media tour where she gave numerous television interviews, Dolezal largely disappeared from public life. In Oct. 2016, she legally changed her name to Nkechi Amare Diallo — a name with African origins — though she continues to go by Rachel Dolezal publicly.

In February 2017, a profile on Dolezal by The Guardian's Decca Aitkenhead stated that the former civil rights activist was unemployed, unable to find a job after applying to over 100 positions. She was still living in Spokane, was receiving food stamps, and was anticipating becoming homeless after turning to a friend to pay her rent. However, one month later on March 28, 2017, Dolezal published a memoir she co-authored with Storms Reback called In Full Color: Finding My Place in a Black and White World and landed back on her feet.

Dolezal now appears to run her own business, as she sells various goods from her website. This includes some of her artwork, autographed copies of her book and photos, and multi-racial doll sets called "melanin spectrum dolls." As of November 2017, Dolezal was also selling her own brand of homemade lollipops, soy candles, and soaps, according to the New York Post, but none of these items are listed on her website today. Currently, Dolezal works for Local Legendz Barbershop in Spokane, where she braids hair, according to her Instagram account.

The documentary, which was made by filmmaker Laura Brownson, follows Dolezal's life over the course of two years. It largely focuses on her home life with her children, and the first clip puts the spotlight on her son, Franklin, who appears to resent his mother's decision to step back into the limelight.

"In making the film, I came to a deeper understanding of the raw nerve that Rachel hits in our society, but I also learned that her motivations to identify as she does are far more complicated than most realize," Brownson told Vulture's Chris Lee. "Regardless of how people feel about Rachel, I hope the film will challenge audiences to think more deeply about race and identity in America."

It's unlikely The Rachel Divide will change anyone's mind about Dolezal, but it should offer a window into what's been going on in the controversial figure's life since she faded from public view years ago.