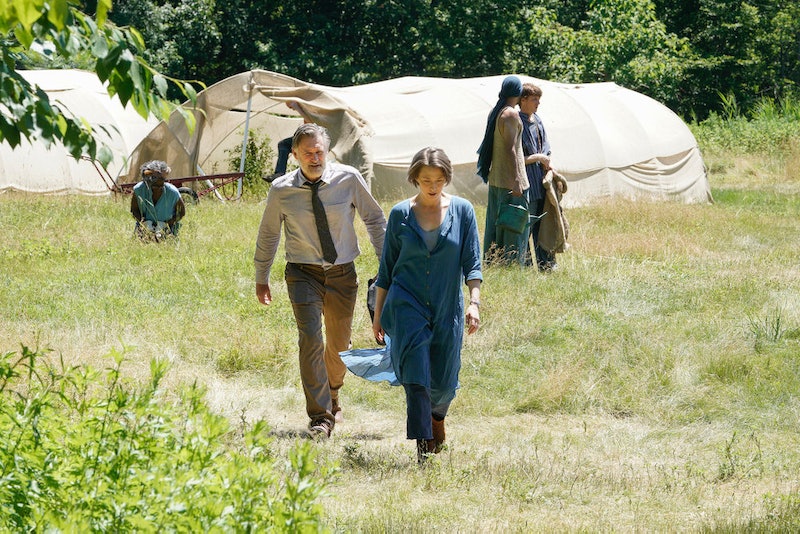 Carrie Coon's Vera has seemingly been leading the Mosswood Grove cult on The Sinner Season 2, but "Part IV" introduces a new major player. Spoilers follow. Heather and Harry Ambrose discover that the Beacon established Mosswood Grove. The Beacon is the title of the psychotherapist Lionel Jeffries, who wrote the book, Escaping The Labyrinth. Mosswood appears to have been founded on his teachings and while he's currently nowhere to be found, it's likely that he's largely responsible for what has happened with Julian, Adam, Bess, and Marin.

Obstetrician Dr. Sheldon Poole tried to avoid giving the police any information by killing himself in "Part III." However, his diary gives the detectives the first clue about "the Beacon" since it contains a photo of this mysterious cult leader. When Ambrose and Heather go to visit Dr. Poole's patient Carmen Bell who filed a malpractice suit against him, the former Mosswood resident mentions the Beacon. "The Beacon, he liked to surround himself with pretty things, but he got bored really easily," Carmen tells the detectives when Heather asks about Marin. Carmen also claims that the Beacon had planted eggs in her brain. Heather then shows Carmen the photo of the man that was in Dr. Poole's book to confirm he's the Beacon. Upon seeing the photo, Carmen becomes frantic, pleading with the police to be able to keep the photo before turning violent and being escorted away by the psychiatric institute employees.

The word "beacon" means a guiding force that inspires hope. However, the Beacon of Mosswood clearly did not have pure intentions. Heather uncovers that he lost his medical license in the 1990s due to scandals involving his practices. He believed in "returning to ritual" and would have his patients and followers reenact past traumas. The woman at the publishing company that printed his book Escaping The Labyrinth tells Heather that people accused him of physical and sexual abuse. And the publisher notes that they don't where he went after those allegations.

Ambrose also gets some insight into the Beacon when he goes to Mosswood with Vera. She leads him to the Beacon's cabin in the woods and Vera tells Ambrose simply, "He's gone now." However, that doesn't mean that Lionel Jeffries is dead. And there's reason to be suspicious that Jeffries was the "very thin man" who stole the tape of Carmen's deposition about Dr. Poole.

Beyond leading Mosswood, there's a very good chance that Jeffries is tied even more intimately to the case against Julian. If you believe that Marin is Julian's mother, Jeffries could very well be his father. Carmen implies that the Beacon had sex with the "pretty things" he surrounded himself with at Mosswood. And based on her egg planting story and her extreme reaction to seeing a photo of Jeffries, it seems she might have had an intimate relationship with him too. Plus, Mosswood had sent Carmen to Dr. Poole to have an abortion, which was possibly the child of the Beacon, before the obstetrician removed her entire uterus.

Perhaps when Marin officially joined Mosswood, Jeffries raped her as some sort of ritual, as Heather noted before. And instead of Heather getting an abortion, she was the chosen woman to give birth to the leader's child. Since Mosswood had a secret obstetrician and there are no children besides Julian in the community, it seems that Jeffries might have forced any women whom he impregnated in Mosswood to terminate their pregnancies. So Vera thinks that Julia is so special and a "new kind of man" becomes he comes from "the Beacon."

While Ambrose is caught in his own Mosswood-induced labyrinth at the end of "Part IV," Heather is getting closer to the heart of this case. And perhaps if Heather is able to find her missing friend Marin, she'll also find out about all the atrocities that the Beacon has done and how this has all been passed onto Julian.