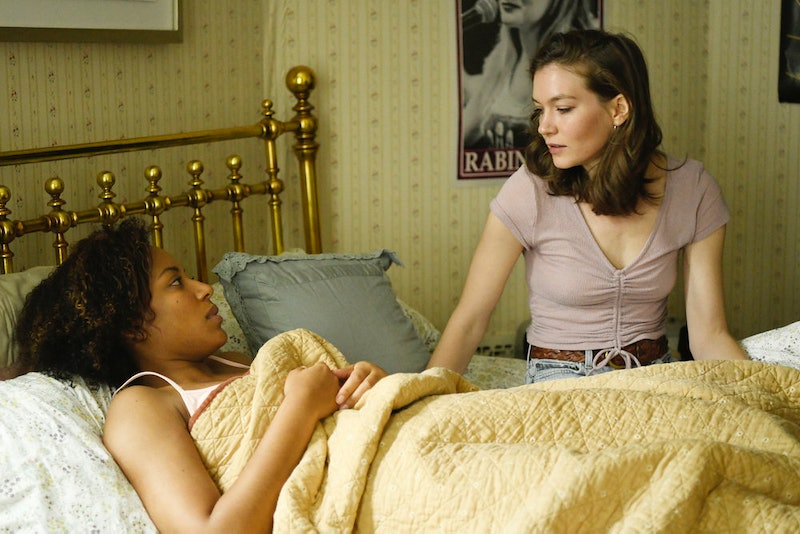 Part of the mystery of why Julian killed Bess and Adam on The Sinner is wrapped up in who these people were to him. And "Part III" confused matters even more. Spoilers ahead. Heather begins to suspect that Marin is actually Julian's mother on The Sinner. This is Julian's third potential mother in only three episodes, but Heather's hunch is certainly convincing. Besides the timeline of Marin (Hannah Gross) joining the Mosswood commune adding up, the doctor who signed Julian's birth certificate clearly had something huge to hide, since he kills himself rather than speak to the police. So as "Part III" makes clear, the big reveal of this season of The Sinner will be what happened to Marin and how she is connected to Julian.

Through Heather's memories, The Sinner gave some insight into the type of person Marin was and how she first became interested in the Mosswood Grove cult in "Part II." Even though they were best friends and occasional lovers, Heather never truly looked into Marin's disappearance after she joined the cult. But Heather opens up those old wounds in "Part III" when she investigates the double homicide perpetrated by Julian and how Mosswood is involved. Marin's mom — while not happy to see Heather – gives the detective in training some of Marin's possessions. As she takes this trip down memory lane, Heather discovers a book (the fictional Dolphin Beach) that sure makes it seem like Marin is Julian's mother. And Heather brings this detective work to Ambrose.

Right now, Vera says she is Julian's actual mother. But as the head of Mosswood, she could easily claim to be the parent of a child that was born there. As stated in "Part II," Julian is the only child in the community. The reason for that is unclear, but perhaps Mosswood doesn't want its members having children. And if Marin became pregnant, the solution might have been to have the leader take over as the parent. Or, if a baby is born in Mosswood, maybe the rule is that the community takes ownership and control of the child.

If you believe Heather's theory, then no matter how Vera took control of Julian's life, it can't be good news for Marin. There's a possibility that Marin died in childbirth, but that seems almost too tragically simple for a show as twisty as The Sinner. Instead, it's more likely that there's a complex and ominous Mosswood reason that Vera would take Julian on as her son. And even though Marin would have only been a teenager when she gave birth to Julian, she probably didn't hand him over willingly to Vera — especially if she had dreamed of naming a child Julian as her underlining in Dolphin Beach indicates.

Heather also realizes that Julian was born nine months after Marin entered Mosswood. As Ambrose notes, Marin could have been newly pregnant when she entered the commune. But Heather has a more intriguing hypothesis too: that Marin could have been impregnated as "some kind of initiation ritual or something." So the detectives head to the office of Dr. Poole, the obstetrician named on Julian's birth certificate.

Dr. Poole admits he wasn't present for the birth of Julian, which gives Heather confidence that Marin is his mother. And when Ambrose asks if Dr. Poole had treated any other women at Mosswood, he goes to "get his files" and slits his own throat when out of sight of the detectives. After his death, they discover a miniature version of the rock that's located in the barn at Mosswood, which confirms that Dr. Poole had a far greater connection to the cult than he let on.

So, was Dr. Poole doing some experiments on babies at Mosswood that Marin was a part of? Perhaps Julian survived because Vera saw something special in him. After all, in "Part II," she told Heather and Ambrose, "My son is so far beyond anything you can understand." Of course, none of this explains what happened to Marin after Vera took Julian. And it also doesn't address who the father is. But if Vera thinks Julian is so special, perhaps Julian's father was a key figure in Mosswood, and he raped Marin. As Alexandra Stein wrote in an opinion piece for NBC News, many cult leaders dictate women's reproductive rights and force their female followers to have sex with them.

Heather is certainly getting closer to the truth about Julian on The Sinner, but what happened to Marin and where she is now is still a major question mark. But if Julian really is Marin's child, she probably didn't leave Mosswood on her accord. And while it's very likely that the community could have killed her, there's a chance that Marin could be reunited with her son before this season is over, all thanks to her former best friend's investigative work.