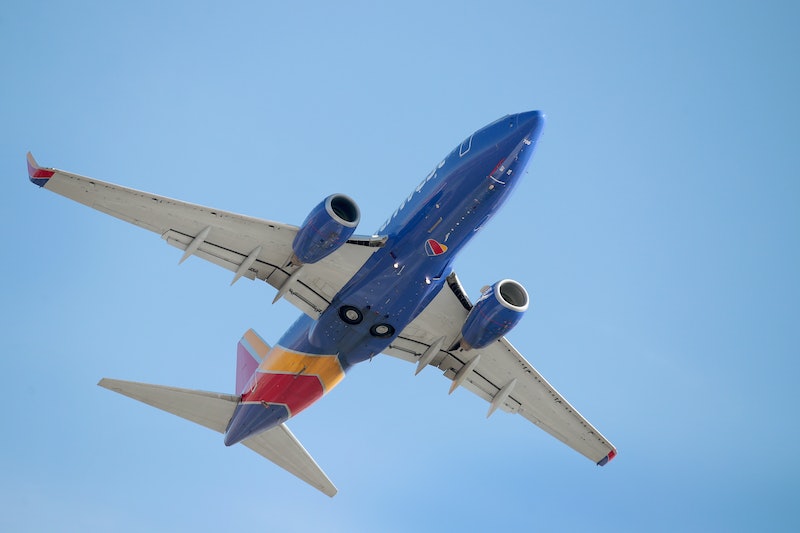 There are a lot of negative things to be said about using flying as a form of transportation. Airplanes are cramped with small, uncomfortable seats. They are basically a germ-filled nightmare for anyone concerned about catching a cold (or something worse). Airline food is certainly not ideal, and don't even get me started on the astronomical prices you have to pay in order to travel somewhere with luggage. But perhaps the worst thing to deal with, for many, is turbulence, especially if you're prone to motion sickness. Sure, the bumps and unexplained dropping feelings aren't the end of the world, but for those who tend to feel nauseous over the slightest movement, it can feel like a slight form of torture. If that sounds like you, then you need to know about the best places to sit on an airplane for motion sickness. It could change things for the better!

You already know that, when it comes to comfort, not all airplane seats are the same. Some offer more legroom, while the seats in first class are all about pure luxury. But comfort level isn't the only thing that can vary. Some seats will offer you a little extra relief from turbulence, meaning that they could make flying easier for you if you're prone to motion sickness.

Motion sickness happens when the central nervous system receives conflicting messages from the sensory systems, such as the inner ear or skin pressure receptors. So, for example: if you're sitting in a plane, and all of the sudden things get bumpy and the plane starts to go up and down over and over again, but your eyes are looking at a "static view," that can cause the horrible feeling of motion sickness. Your eyes are looking at something stationary while your inner ears are feeling movement — your nervous system is getting confused.

To prevent that from happening, you want to try to minimize excessive moment as much as possible. Unfortunately, you have no control over what the plane is going to do in the air, or what the wind is like outside, so you can't try to minimize movement. What you can do, though, is pick a seat that is a bit more steady. There are certain parts an aircraft that will shake less and be buffeted from the wind more.

The Daily Mail spoke to commercial airline pilot Jonny Knowlson (also known as "Jonny The Pilot" on social media), who revealed some tips for a more comfortable flight. Knowlson said, "If you're looking for the smoothest ride, did you know sitting over the wings on a big aircraft that flies at a higher altitude will work in your favor? Being closer to the center of the plane's mass while forces such as lift, torque, wind, gravity, drag, and thrust act upon it will mean you'll be well-placed for a smooth ride." So there it is: if you experience motion sickness, your best bet is to choose a seat over the wings of the plane. You'll have a steadier ride, which will help prevent that dizzy feeling we all want to avoid.

As someone who is prone to motion sickness and who always chooses a seat over the wing on an airplane, I can confirm that this works. I've heard other people in different seats complain about turbulence I haven't felt as much sitting over the wing. Now, of course, you're still going to feel turbulence in these seats — they aren't magic! — but it shouldn't be quite as bad (unless the turbulence itself is, uh, extremely bumpy).

The downside to the seats over the wing? One is that you don't usually get a great view, which can be a bummer when you're landing. The other is that first class and "extra legroom" seats are usually towards the front of the plane and not over the wing, meaning you'll need to make a decision: more room, or potentially less turbulence?

More like this
You've Probably Been Saying Ibiza Wrong
By Sam Ramsden
I Tried Float Therapy In Iceland's Blue Lagoon — Here's My Honest Review
By Alexandra Owens
Expert-Approved Hacks For Packing A Carry On
By Jessica Goodman
Where Was 'The Bachelorette' Season 19 Filmed? More European Destinations Are On The Way
By Radhika Menon
Get Even More From Bustle — Sign Up For The Newsletter