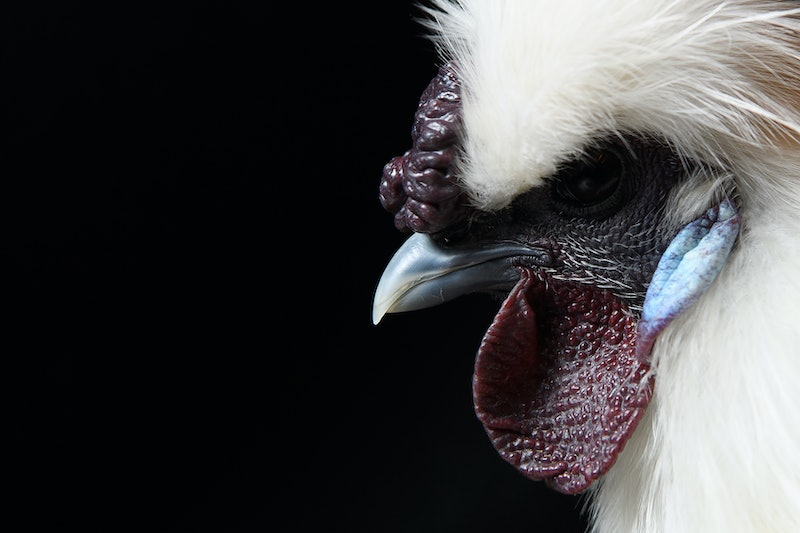 If you've been following the latest internet excitement surrounding the giant chicken, you probably have a few questions — OK, maybe more than a few. Like, where the giant chicken comes from, and is it going to peck humanity to death? One answer won't surprise you and the other won't scare you.

The giant chicken is actually just a Brahma Chicken, a breed of fowl that was developed right here in the United States in the 1850s. And no, it's not dangerous, and has no interest in pecking anything other than grains and veggies.

Though the bird originally came from Shanghai, China, it was then considered a different breed: the Cochin. It was only after the American poultry industry were able to breed together large Cochin fowls, that the Brahma fowl breed was born. They're now found in four colors, black, buff, dark, and white, but can have all sorts of fun color combinations, too. In a time when there were virtually no standards for breeding, the documentation was scarce. So the exact origins are a little murky. We're not 100% where the name comes from — some people say it was named after a river, others say a farmer. But what we do know, is that the Brahma Chicken as we know it — the kind that can reach up to 18 pounds — is an American made breed.

But just because we bred large fowls together, doesn't mean that they're the monstrous bi-product of American greed. Lots of animals are bred together to create desirable breeds. I mean, as the owner of a toy Malti-poo, I've come to accept that cross breeding is just a thing we do. It's not like McDonalds is sitting there in a lab genetically modifying giant monster chickens and growing them in test tubes for our consumption — well, at least not that we know of.

So fear not, the Brahma Chicken is not an enemy from a far away land. They're considered gentle giants. So much so, lots of people keep them as pets. Because of their massive feather count, they're incredibly fluffy and apparently don't mind a good petting or even being held. Owners describe them as having temperaments that range from shy to friendly and curious — making them sound a lot like puppies, TBH.

If you're still curious about their roots, you might want to check out the poultry marketplace that uploaded the video in the first place. There's apparently a large presence of giant chickens still in India and China — I don't know, in case you're in the market for a giant bird pet. I wouldn't blame you, TBH.