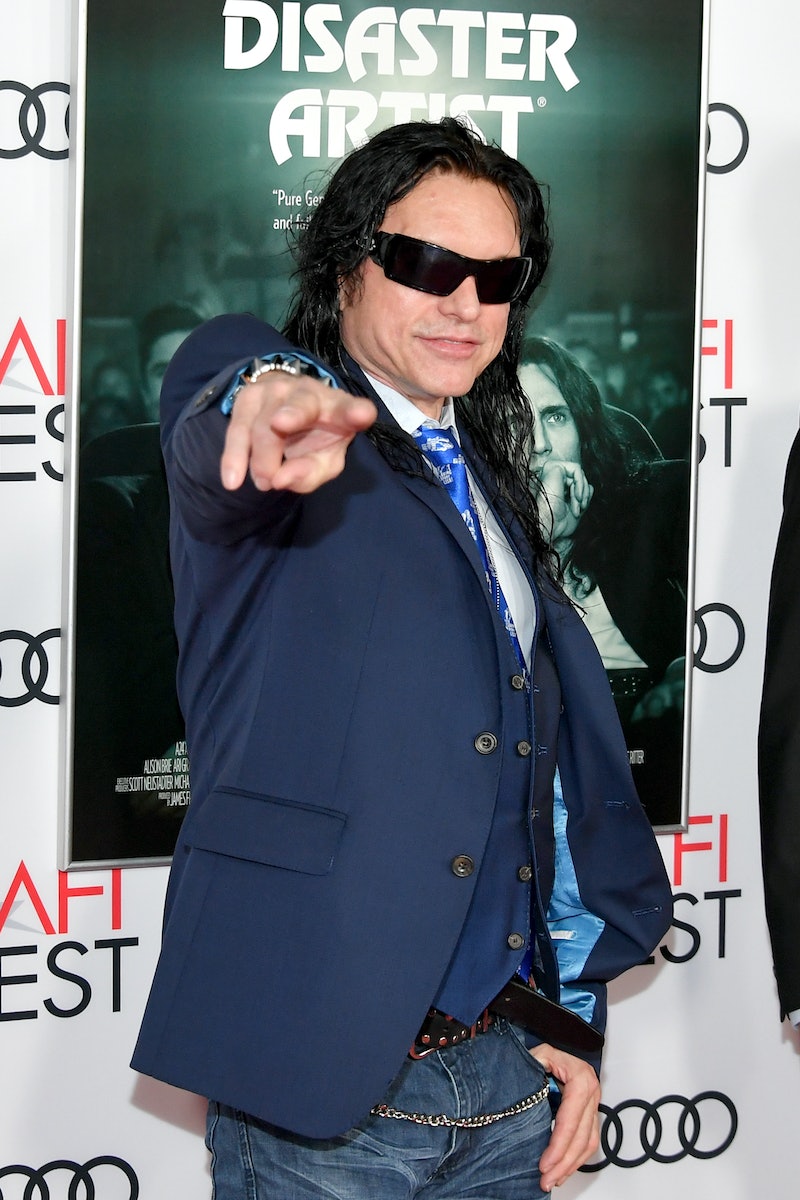 Thanks to the new film The Disaster Artist, fans of the cult classic The Room are finally getting to find out where the real Tommy Wiseau is now, in 2017. Wiseau became a Hollywood legend when he released his 2003 film, The Room. It's a status he's cultivated by revealing very little about his personal past — his place of birth and birthday, for example, are almost mythic — making him one of the most puzzling figures in pop culture. Even now, almost 15 years later, there's a lot fans don't know about the director, which is part of what makes The Disaster Artist so appealing. The movie offers a behind the scenes look at The Room, shedding some light on what Wiseau was really like back then, while also giving the real Wiseau another chance at embracing his fame.

Since its release in 2003, The Room, which Wiseau wrote, directed, and starred in, has become widely known as the best worst movie ever made. That title has, in turn, made the film a cult hit. Being known as the man behind the worst movie ever made doesn't exactly sound like the foundation for a lasting career in the movie-making business, and yet, Wiseau is still a present force in Hollywood (albeit, a weak one). Currently, the actor and director is enjoying his time in the spotlight as the inspiration for The Disaster Artist. The movie, already an awards season favorite, was directed by James Franco, who also took on the role of Wiseau, and details the making of The Room. Even though the movie focuses on that early 2000s period of Wiseau's filmkaing, it actually gives fans a big insight into who the director is and what Wiseau is up to now.

After The Room failed to launch a lucrative film career, Wiseau took a brief break from the film industry. But, as his resumé shows, he went back to Hollywood seven years later, again creating and starring in his own content. He produced his own sci-fi talk show called The Tommy Wi-Show in 2011 — episodes were released online and can still be viewed on YouTube. He also created and starred in The Neighbors, another self-produced show that was never really released. Most recently, he acted in Best F(r)iends, a feature length film written by his The Room co-star, Greg Sestero, who also stars in the film. He also appears in a scene in The Disaster Artist as Henry (which fans will have to stay to the end of the credits for). Off set, Wiseau also sells his own merchandise on his website. He sells everything from The Room t-shirts to branded underwear.

Safe to say Wiseau has kept himself busy over the years. But whereas he has always tended to keep his true self in the shadows, the release of The Disaster Artist has allowed fans to get to know the director in a brand new way. With The Disaster Artist's Dec. 8 release date fast approaching, Franco and his co-stars Dave Franco, Seth Rogen, and Ari Graynor have all been busy promoting the film. And Wiseau has been right there with them. Wiseau and Franco have participated in multiple joint interviews during The Disaster Artist press tour, including a recent appearance on Jimmy Kimmel Live.

In the interview, the best worst director had nothing but positive things to say about the movie, telling host Jimmy Kimmel, "I think everyone in America should see it." He added that the film was "99.9 percent" accurate in its portrayal of him. Not only did the interview give a bit of an insight into what Wiseau is doing now (promoting the movie), it also revealed where he's from — born in Europe and lived in Louisiana — information previously kept secret. (His IMDB page states that he was born in Poland in 1955, but Wiseau himself has refused to confirm or deny almost anything about his past.) Fans aren't just getting to know Wiseau today, they're also getting more glimpses into his past.

Wiseau's newly elevated public profile could very well lead to more projects in the future. But, for now, fans should be satisfied at seeing him finally celebrated as an artist — even if it is as the best worst filmmaker in Hollywood history.