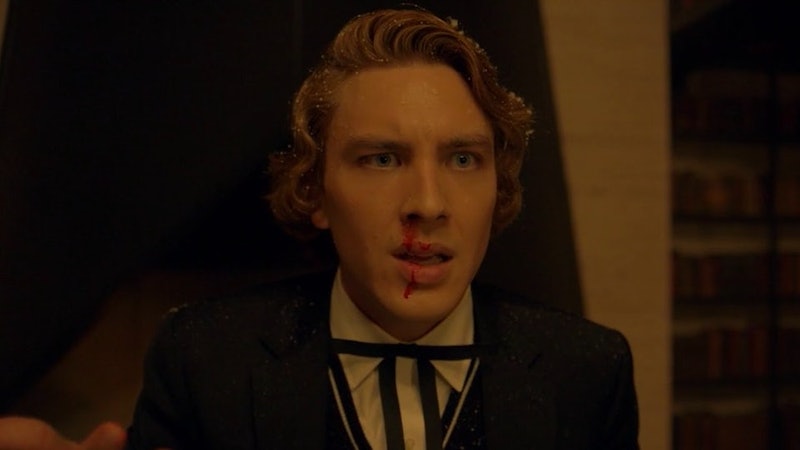 The last few episodes of American Horror Story: Apocalypse have done well to expose Michael Langdon's horrifying past, but there are still many unresolved questions about his intentions — especially when it comes to events that have taken place post-apocalypse. Like, what exactly is his endgame with all of this and, perhaps even more importantly, where is the sanctuary on AHS: Apocalypse that brought him to Outpost 3 in the first place? Michael claims to be working on the Cooperative's orders, but by now we should all know that this guy answers to no one but himself. So what gives?

It's been a few weeks now since fans have even checked in with any of the characters still hunkered down in Outpost 3. Ever since the Coven arrived and brought Coco, Mallory, and Dinah back to life, we've seem various flashbacks that help to explain how we got to this moment in time. However, the Cooperative and their supposed Sanctuary have yet to make an appearance on the show. So what could this mean? Michael mentioned upon his arrival that the Sanctuary would provide those who are chosen to go there with unlimited shelter from the apocalypse that could last for many more years. He didn't specify the location of this supposedly impenetrable place, but here are a few distinct possibilities.

When Madison and Chablis went to the house Michael was born in, they learned some disturbing things about his past from the spirits that still dwell inside, but they also discovered that Murder House was actually built on top of a portal to hell. Michael always felt most at home here (possibly for this very reason), so it would make sense he would want to return there with any followers he's collected along the way.

This seems a little unlikely considering Cordelia wouldn't have given this place up without a fight, but given that Michael completed the seven wonders there, he could now think of the school as his own..

Murder House and Coven haven't been the only seasons to connect to Apocalypse — Michael previously stopped by Season 5's Hotel Cortez to save Queenie. It's a magnet for evil, so maybe Michael enjoyed his visit so much that he thinks of it as the perfect "sanctuary" for him and his minions. It'd be a great way to have these two worlds overlap once again.

This one may be a stretch since the asylum was already looking pretty decrepit, so it may not be the best place for a presumed Antichrist to use as an evil home base. That being said, Ryan Murphy could be looking for a way to bring other past seasons into the equation and this would be the perfect way to do just that.

An Unheard Of Destination

Then again, it's just as likely that this Sanctuary is a place we've never heard about or seen before, making its whereabouts impossible to predict.

There Is No Sanctuary

And, of course, this is Michael we're talking about here, so there's also a chance that there's no Sanctuary at all and he simply made it all up to have the residents of Outpost 3 turn on each other.

Either way, we're bound to get some answers about this mysterious place soon and find out once and for all how it fits into Michael's devious plans.