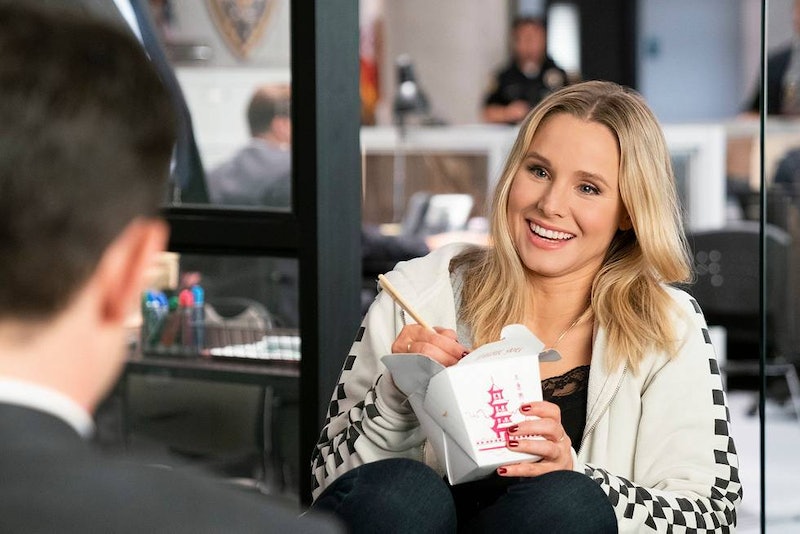 Spoilers ahead for Veronica Mars Season 4. Considering how long fans have been waiting for another installment of Veronica Mars, the Season 4 finale seems like a coded message to viewers that this series is officially done-zo. Not only did the writers blow up their leading man, but Veronica Mars is leaving Neptune and this time, it seems like it's for real. But there's an upside to her losing the love of her life and packing up her things, if you can just open your heart a little to accept it.

Fans of the series, the 2014 movie, and the books know that Veronica has always been looking for a way out of town. And she followed through on that dream by going to Stanford University and living in New York City with Piz back in the day, only to be sucked back into small town life. But after her sweet, tragic wedding to Logan and his subsequent death in Season 4, it seems like Veronica is (finally) leaving for good. The look she gives the camera when she hears Matty picking up the phone at Mars Investigations is a clear sign that Veronica feels comfortable leaving town — and her dad — for real. If you think of it like that (and not through the blinding grief of knowing that Logan is as dead as a doornail), the Season 4 ending makes sense.

Veronica has always hated Neptune and now she can really get the heck out of dodge. And run into the loving arms of her long time admirer.

It's unclear where Veronica is going at the end of the season. But here's a theory that some fans might hate, but is actually pretty valid. Hear it out — maybe Veronica is going to D.C. where she can practice law or actually go into the Federal Bureau of Investigation like she was meant to do way back when. To end up with Leo. Please, bring on that fan fiction.

Listen, Leo was a total creep back when Veronica was in high school, for sure. No one disputes that. But they have great chemistry now that she's all grown up! Even Veronica knows it, as evidenced by her steamy sex dreams of him in Season 4. Leo gets her — he doesn't mind wandering around a hardware store to follow a hunch, understands and respects her mission to save the world from lesser men, and keeps snacks in his pocket. And he's always loved Veronica and was never afraid to say it. He's the kind of guy who shows up at your door with a pizza or a pastry depending on the time of day instead of leaving a rambling voice message you might never even hear.

This guy is one hundred times better than mopey ol' Logan Echolls ever was, may he rest in peace.

Too soon? Listen, losing Logan like that was unnecessary and sad, no one can ever convince fans otherwise. Veronica definitely needs time to mourn and move on. But moving onto a more lucrative and legit career in law enforcement with Leo at her side is not a terrible ending to her story. Leo even gets along swimmingly with Keith, so when they go back to Cali for visits, they can be one big happy family.

Of course, Veronica could be going anywhere and it might not necessarily be to D.C. or into Leo's loving arms. But it's not a bad plan if the mood strikes her.