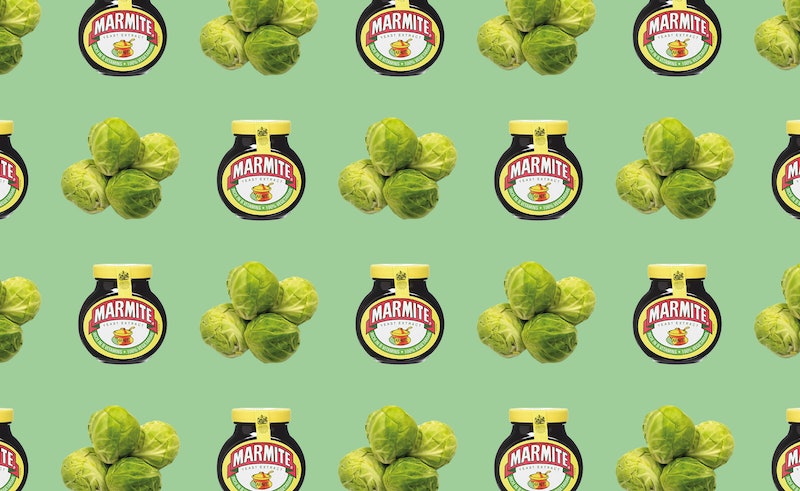 So, it's not often you can describe an item as love it or hate it. Normally people have their own eccentricities and kind of flirt with certain food items. You know, dip in and out. However, looks like this Christmas, 'tis the season to be outrageous because Marmite infused sprouts are officially a thing. But where can you buy Marmite sprouts?

These salty farty (god so delicious) treats will be available in an Iceland near you for the cheap as chips (or should I say sprouts) price of £1.50. What?! Yes, it is time to invest. And I am telling you, stick these on a cocktail stick with a bit of cheese and you are going to win any sort of canapé party. Depending on which side of the fence you proudly stand this could be the most despicable, revolting, and horrifying news you've heard all day, or this could the the kind of news that makes you want to clear your freezer to stock up. The reasoning behind this unprecedented pairing is actually really interesting, and kind of a heart warmer, as revealed in their press release.

So, Marmite has long had the reputation of being a "love it or hate it" kind of food. Hell, they have actually marketed themselves as such. With countless ad campaigns featuring people saying they think it is gross or pulling faces at the mere mention of it. This sense of humour shows that enough people flipping love it to keep it popular. In actual fact, a post Brexit price increase back in 2016 led to actual despair from fans of the dark sticky spread, who have grown to need it. Sales have absolutely boomed over the years, especially after the publicity it garnered after disputes over its price increase, as Marketing Week reported.

Marmite really is as British as cheddar cheese, slate grey skies, and minding your Ps and Qs. So is, one could say, the humble Brussels sprout. Yet, according to a study done by Unilever, who own Marmite, this particular love it or hate it food item has not had the same kind of success. Actually, it might be on the way out.

It looks like, according to over half of those surveyed, that sprouts might completely disappear from Christmas dinners by 2020. WHAT?! I hear you cry, and I agree. I flipping love a sprout. However, it seems that British families prefer a cauliflower cheese or a bit of sweet potato vibes. Ugh, why can't we just have ALL of those things?

So, Iceland and Unilever have teamed up for the Save Our Sprouts campaign, or SOS, stating:

"This Christmas, in order to halt the decline in popularity, Iceland and Marmite are waging a campaign to save our nation’s sprouts and spread Yuletide joy, with the creation of Marmite Brussels sprouts".

According to the experts, the two flavours compliment each other enormously with the delicious umami laden Marmite drawing out the natural sweetness inside a cute little sprout.

"Both Brussels Sprouts and Marmite are known for dividing opinion but it's amazing how well the two flavours work together. We're excited to be bringing this new flavour combination to customers as part of our Christmas range, and hopefully encouraging more people to enjoy sprouts in this must-try dish."

Well, may as well give it a whirl. The sprouts land in Iceland stores from November 19. Get involved.