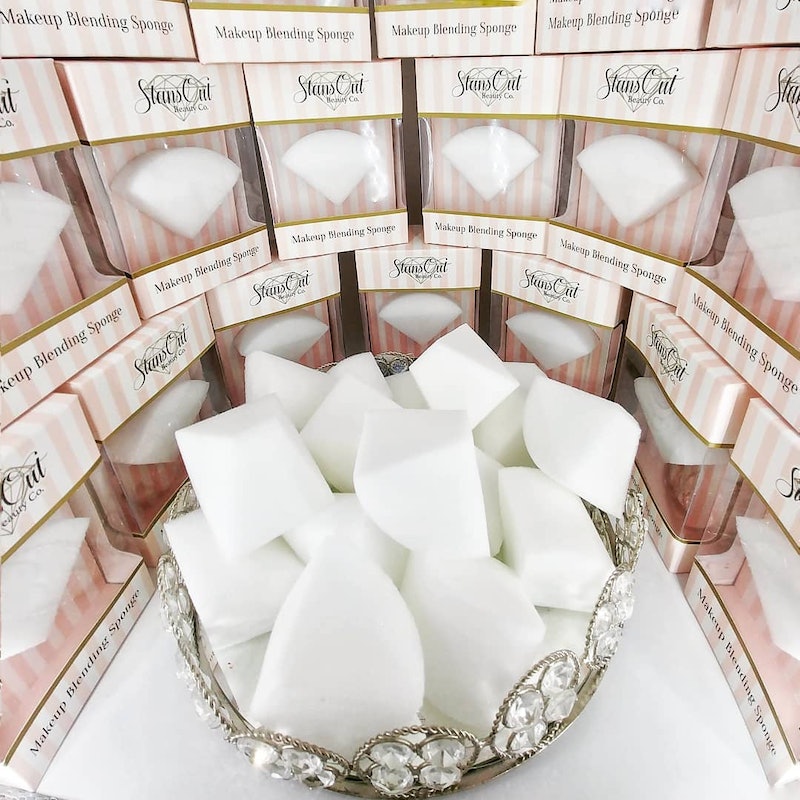 The beauty world isn't short on interesting (re: odd) products. From bubble masks to click pen brow pencils, there's a lot happening. Now, beauty fans can embrace the world of Memory Foam blending sponges. Yes, the phenomenon that began with the famous BeautyBlender has now taken on new life in a sizable, squishy memory foam sponge.

Is the sponge actually made of memory foam? No, probably not, but it could be, and according to Tati Westbrook, the sponge certainly feels like it is. What exactly is this quirky innovation, though? It's the Stans Out Beauty Makeup Blending Sponge, and apparently, it's going to be your new go-to beauty tool.

While the sponge has been floating around the internet for a while according to the brand's Instagram account, it's Tati Westbrook's YouTube video that's catching people's eye and sending them running over to the Stans Out Beauty website to get this smooshy foundation blending tool.

As it turns out, though, it's for more than just foundation. According to the packaging that Westbrook received, the sponge is designed with multiple sides so that users can blend foundation, concealer, set with powder, and contour with a single tool. Sounds pretty great, right? But does it work?

According to Westbrook, yes! This fancy new sponge seems to be a blending dream, and after using it, Westbrook's foundation looks flawless (not like it doesn't always look like that). In her review, she goes on to say that the sponge is interesting for its ability to be used wet or dry, and one of her other notes is that the sponge is sizable. When held up to her face, it basically covers half of her cheek making application super quick.

Another cool feature about the potentially memory foam made sponge? It's designed to react to your body heat. According to the website, the beauty tool reaches its maximum softness in reaction to use against your skin. Plus, Westbrook describes that not only is the sponge incredibly soft, but that it also seems to absorb less product than a traditional BeautyBlender or other makeup sponge.

Apparently, people are starting to catch on to the beauty of the Stans Out sponge. If you head to the brand's Instagram account, you'll see that not only did they sell out of their Amazon stock of the sponge, but they began to take orders over the phone when their website went down due to traffic. Talk about customer service!

Whether this is from Westbrook's video or just word of mouth in the beauty world, it's hard to tell. One thing seems clear, though, and that's this memory foam sponge seems to be the next big product in foundation application. You can forget all about that Silisponge and maybe even your alternative BeautyBlenders. According to Westbrook, the baby is just as good at blending.

As of press time, it appears that the Stans Out Beauty sponge is available again on their website for $20. You may want to head that way soon, though. With a sell-out on Amazon and Westbrook's video probably heading for more views, this may be your only chance to get it before it's gone.