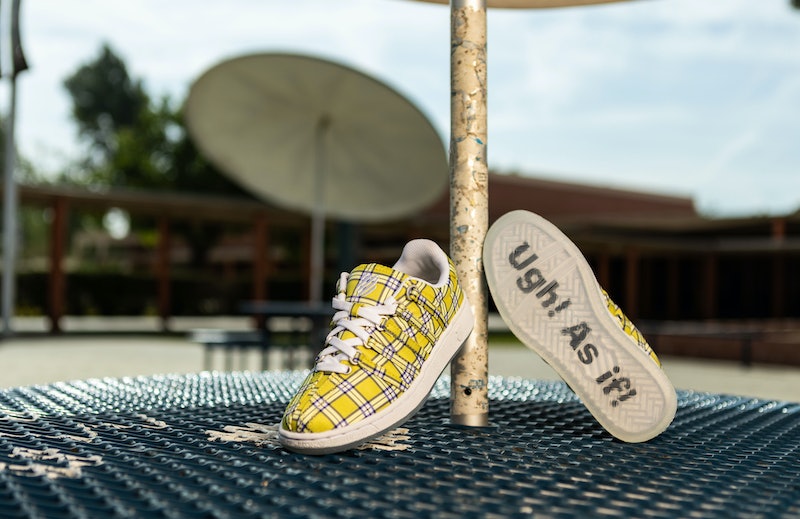 One of the most beloved and distinct fictional fashion icons of the '90s is Cher Horowitz of Clueless fame. From her signature plaid mini-skirts to white knee-highs paired with chunky Mary Jane platforms, Cher was the architect of an aesthetic. Heritage footwear brand K-Swiss is dropping a Clueless sneaker collection on May 17 and it's wholly inspired by Cher's instantly recognizable style. There are only two pairs so the range is small yet focused. But you can never, ever overstate how important shoes are to your OOTD. After all, Cher once admitted that she was picky about her suitors in the same was picky about her shoes, which only go on her feet.

The limited edition Clueless x K-Swiss collection boasts two variations of the brand's all-leather Classic VN tennis shoe. The popular silhouette gets a Betty-like makeover. Each pair features Cher's signature yellow and blue plaid pattern interpreted in two very distinct ways. One of the sneaker styles is incredibly subtle while the other is a bit more pronounced.

The Clueless x K-Swiss sneakers will be available at Footlocker, Footaction, and Journeys locations, as well as via the K-Swiss site.

Cher never had an "ensemble-y challenged" day in her life and the yellow plaid two-piece set has become synonymous with her style. Therefore, it makes total sense that K-Swiss distilled that particular print into two pairs of shoes.

If you have labored under the illusion that K-Swiss kicks are basically dad shoes, the Clueless sneaks prove otherwise. Cher would totally approve of these shoes. The low-key design on the left is all-white and features the signature K-Swiss stripes. It gets a pop of color and a dose of pop culture from the plaid detailing at the back and on the bottom. The other shoe offers a more obvious take on Cher's signature look by featuring an all-over plaid pattern. Ultimately, you can express your love of Cher and Clueless via your footwear in either a laid back or super visible way. It's up to you.

Each pair has a translucent, ice blue outsole and features memorable phrases from the film. One of the soles is stamped with the film's logo and the other includes the phrase "Ugh! As if!," which Cher, played to perfection by Alicia Silverstone, uttered throughout the film.

The shoes come with Clueless-themed boxes and packaging. So rather than recycle the box, you can repurpose it for storing valuables since it's too damn cute to toss. If you are a collector and a Clueless fan, you will find many other creative uses for the boxes.

Given the love that fans and '90s kids have for the film, it was only a matter of time before Clueless kicks became a reality. They will provide the ultimate '90s finish to your OOTD. You'll be totally buggin' because you have no cool shoes to wear.

In case you missed it, Box Lunch dropped a collection of Clueless lip glosses inspired by Cher's plaid and her bestie Dionne's hats. You can never have too much of Cher and co. in your life. As if!

You have to give big ups to the brands that keep the much-missed '90s alive with capsule collections that pay sartorial homage to the period. These Clueless sneakers are a reminder that '90s fashion and the corresponding nostalgia remain in vogue.

More like this
Harry Styles’ Red Carpet Looks Have One Thing In Common
By El Hunt
15% Pledge Director LaToya Williams-Belfort On The Impact Of Supporting Black Business
By Dominique Norman
Anne Hathaway Revived 'The Devil Wears Prada' In The Most Andy Sachs Way
By El Hunt
Bella Hadid's Best Runway Looks Of All Time From Paris, Milan, & More
By Allie Fasanella
Get Even More From Bustle — Sign Up For The Newsletter