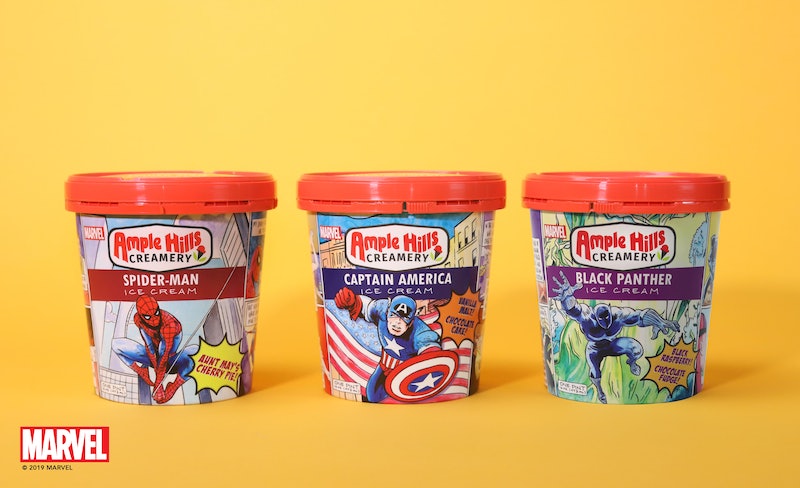 Isn't it great when you get presents on other people's birthdays? For the past 80 years, way before your parents were born, Marvel Comics hit the scene and changed pop culture forever. Since then, Marvel has brought the world superheroes, movies, games, and more. And in celebration of the 80th anniversary of Marvel, Ample Hills Creamery is releasing three Marvel-themed flavors of ice cream.

"To commemorate this milestone, we’ve teamed up with Marvel to churn three brand new flavors inspired by our favorite superheroes: Black Panther, Captain America, and Spider-Man," Ample Hills Creamery said in a statement.

You can get the new limited-edition flavors in select stores for $9 a pint, or order a collection of all three online ($45) and receive a one-of-a-kind piece of art along with your superhero ice cream trio.

"In my previous life I was a sci-fi screenwriter. I would have given my left arm to work with Marvel! It's been a thrill to collaborate with them on these original origin stories. When we found out we could make Captain America, Black Panther, and Spider-Man ice cream we knew we wanted to do mini-comics and wrap them around our pint containers. We wrote stories and sketched out illustrations," Brian Smith, co-founder and CEO of Ample Hills Creamery, said in a statement.

This isn't your average partnership. It's a dream come true for Smith, and the fruits of his labor are both thoughtful and a treat for your tastebuds.

"Marvel was wonderful and open to our creative interpretations. It was important to us to capture the superheroes in our Ample Hills Creamery watercolor aesthetic and yet remain faithful to the look of the old comics. With Marvel's superheroes, we didn't think of flavor first. We studied the characters, their backgrounds, origin stories. We let them lead us to a flavor," Smith said.

Marvel began as Timely Comics in 1939 and introduced Captain America in 1941. Spider-Man made his first appearance in 1963, and the Black Panther debuted as part of the Fantastic Four in 1966. Because all three characters have storied histories, Smith had a lot to work with when creating ice cream flavors that reflect the unique traits of each superhero.

"Inspired by Peter Parker’s childhood in Queens, N.Y., raised by his Aunt May, Ample Hills Creamery created a flavor to celebrate Peter's favorite food — cherry pie," the creamery noted in regard to the Spider-Man flavor. The other two flavors have their own special touches.

"When T'Challa ascends the throne and becomes the King of Wakanda, he drinks from the Heart-Shaped Herb, a magical purple liquid that transforms him into the Black Panther. Ample Hills Creamery captures that beautiful purple hue with black raspberry ice cream, a rare flavor without any artificial food colors," the company said.

"Before Steve Rogers became Captain America, he was just a kid from Brooklyn in the 1940s. Spurred by the idea of a classic flavor from an old-timey soda fountain ... [We] recreated the cake with their own recipe, as an ode to the Brooklyn of Steve Rogers' youth."

And whether you care about these details or not, one thing is certain. These ice cream flavors sound downright delicious, so of course you're going to want to order all three ASAP. In fact, get a bunch and throw an superhero ice cream party for National Ice Cream Day on July 21.