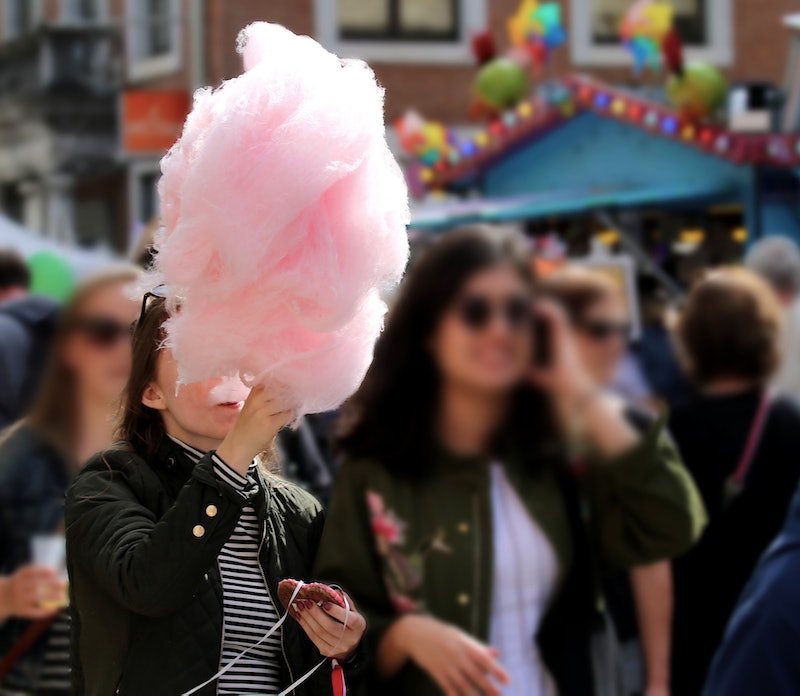 Hey, So. Cal locals, if you're in the business of treating yourself while simultaneously looking like a woodland fairy, look no further: A California-based tea chain now offers cotton candy bubble tea, which is sure to fulfill all the cravings your sweet tooth, Instagram, and sense of whimsy throw your way. In a world filled with multicolored Frappuccinos and bakery treat mashups, the drink manages to stand out by being ridiculously, fantastically over the top. Your Instagram feed will never be the same.

The catch? You have to travel to southern California to get your hands on it. (Congratulations, So. Cal residents — you're already there.) Cotton candy tea is offered by Mini Monster, an offshoot of the popular California-based bubble tea chain Snow Monster. The company specializes in unique desserts like macaron ice cream sandwiches and flavored teas and bobas, which are made in small batches on site over the course of the day. (For the uninitiated, bubble tea is a particularly Instagrammable kind of milk-based or fruit-based sweet drink with tapioca pearls at the bottom.) While virtually all the menu items are as adorable as you're imagining right now, the star of the Mini Monster show is definitely the cotton candy tea.

It all starts with one of Snow Monster's signature light bulb-shaped glass jars. Customers can choose from different kinds of milk- or fruit-based tea, like the strawberry matcha milk latte or Thai tea. Naturally, you can add boba, but that's not why you're reading this article. What makes Mini Monster's tea so special is the addition of cotton candy (for a few extra dollars) to the rim of the glass. The result is a cartoonish, consumable cloud of fluff and sugar hovering above a glass of bubble tea. As you can imagine, it's been a hit on social media.

But wait! There's more. According to Delish, the cotton candy fluff is known as the Monster Cloud, and it is available in two versions. The Rainbow cloud is dusted with Fruity Pebbles cereal, while the Fire flavor is sprinkled with tajin seasoning. Judging from the photos posted online, you can stick the straw straight into the cloud to get to the bubble tea while you're still munching on the cotton candy.

Currently, Mini Monster locations can only be found in southern California, so it's up to you to decide whether you're willing to travel for the foodie 'gram. To find a list of locations, you can head over to Snow Monster's website.

Cotton candy is far from the only way baristas have been shaking up the tea game lately. Currently, the unlikely combination of cheese-topped tea is making its way to American shores from Asian countries. Despite what you might be imagining right now, it's not a glass of tea sprinkled with Parmesan or melted cheddar. (I think we can all agree that idea is singularly off-putting.) The drink consists of flavored iced tea topped with a whipped cheese topping — usually cream cheese or white cheddar. Earlier this year, an entire cafe devoted to cheese tea, Little Fluffy Head Cafe, opened its doors in Los Angeles.

Although the United States is known for its nationwide coffee addiction, tea shops — particularly the kinds that offer unique flavors or gimmicky ways to drink the tea — have been rising in popularity over the last few years. In August, the New York Times covered the surge in popularity of bubble tea houses on American shores, and in my experience, a quick scroll through Instagram usually turns up one or two artful bubble tea photos each morning. Then again, there are also plenty of Frappuccino and latte pictures, so Starbucks may not have to start worrying just yet.

In the meantime, one thing is clear: If you want to be on the cutting edge of bubble tea science, California is the place to be.