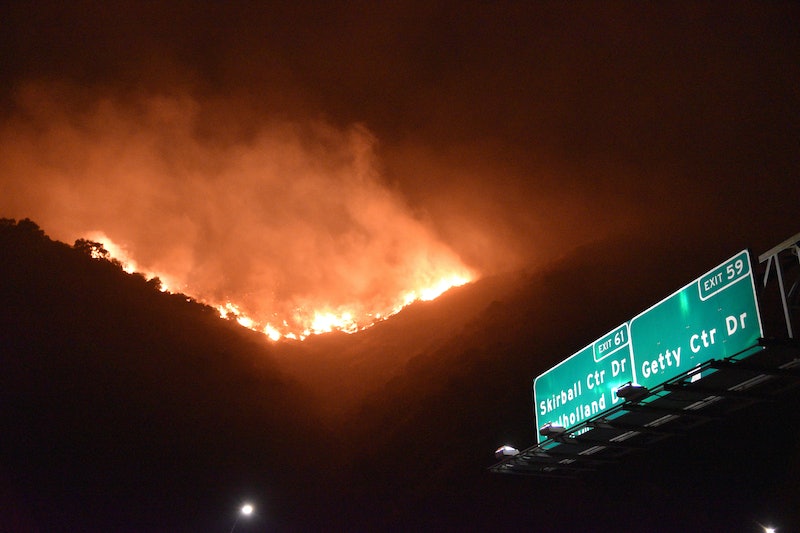 During wildfire season, people on the West Coast know in the back of their minds that they need to be ready to get out of town at a moment's notice. But not everyone knows exactly where to go if California wildfires force evacuations in their area, especially if they have just minutes to flee. Knowing your options beforehand can be crucial to guaranteeing your safety.

The fast-moving Getty wildfire prompted the emergency mandatory evacuation of almost 8,000 homes in the West Los Angeles neighborhoods of Brentwood and Pacific Palisades in the middle of the night on Oct. 28. Some residents told the Los Angeles Times that they had just minutes to get out as the fire approached. One of my friends living in the voluntary evacuation zone awoke to the smell of smoke and decided to pack his bags and head out of town ahead of what proved to be a traffic nightmare as road closures and evacuations clogged freeways.

And with so many people suddenly fleeing, hotel rooms were on short supply. Los Angeles Lakers basketball player LeBron James tweeted that after being forced to evacuate, he was driving around with his family looking for a hotel room, which they finally found after trying several places with no luck.

In a statement, Los Angeles Fire Department Spokesperson Margaret Stewart said residents can access the official fire evacuation map to see when it's safe to return home. Firefighters plan to work throughout the day to fight flareups and hot spots ahead of strong Santa Ana winds expected overnight, which could potentially fan flames of the 656-acre fire that's 5% contained.

In Northern California, the massive Kincade Fire, which began Oct. 23, 2019, continues to burn as residents brace for more mandatory power outages to reduce the risk of new wildfires. The more than 75,000-acre fire has forced thousands to evacuate in Lake, Napa, and Sonoma counties. You can find the most up-to-date evacuation information on the California Department of Forestry & Fire Protection's website.

If you've been evacuated, and you need a place to go, here's where to find shelter from the California wildfires.

More like this
6 Organizations Fighting Police Brutality That You Can Support Right Now
By Syeda Khaula Saad and JR Thorpe
Ashamed Of Your Screen Time Stats? Here's How To Change That
By Alexis Morillo
These 4 Zodiac Signs Make The Best Bridesmaids
By Nina Kahn
These Artists Are Reimagining Black History Month To Create A Better Future
By Katie Mitchell
Get Even More From Bustle — Sign Up For The Newsletter
From hair trends to relationship advice, our daily newsletter has everything you need to sound like a person who’s on TikTok, even if you aren’t.