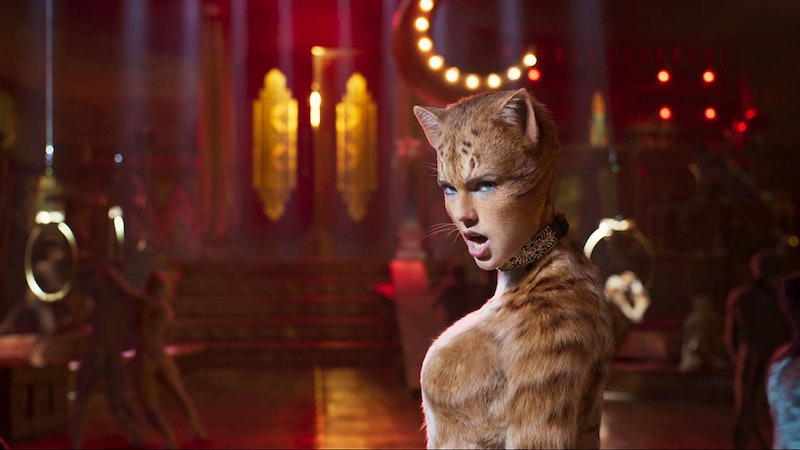 With virtually everyone cooped up in their homes and social distancing to try and stop the spread of COVID-19, people are turning to their TVs to help alleviate their boredom. And there's no better film to keep yourself company with during self-quarantine than last year's big budget adaptation of the Broadway musical Cats. The film is one of the most absurd creations ever foisted upon the public by a major motion picture studio. But finding where to stream Cats may not be so easy if you're only checking the usual suspects like Netflix, Hulu, and Amazon Prime. So how exactly can you watch this movie at home?

As a new release, Cats has not yet hit any of the big streaming outlets or movie networks. The film just ended its run in theaters in mid-February, which means the release window is too short for the film to start streaming for free anywhere yet. So the only way to stream Cats is to pony up some cash — and a lot of it. Currently, the movie is available to buy online through iTunes, Amazon, Google Play, Vudu, and FandangoNow. It's going to set you back about 20 bucks at every outlet, as low-priced rentals are not yet available for the film given that it's such a new release. But is it really worth 20 dollars to stream Cats in your home while self-quarantining? Watch the trailer below and just try to argue against the idea.

To reiterate just how essential it is to have access to Cats while you're stuck at home, take a look at the facts. This is a movie for which Dame Judi Dench, one of the most acclaimed actors ever, received a Razzie nomination for Worst Supporting Actress. It's a movie whose special effects were so cringe-worthy that they were altered by the studio after the film's first weekend in theaters. This is the film that digitally removed Jason Derulo's bulge, that featured Rebel Wilson singing to cockroaches with human faces, and that managed to make Idris Elba look unappealing. It also somehow managed to rope megastars like Taylor Swift and Ian McKellan into acting like literal cats and parading around in the buff while covered in digital fur. It's a ludicrous movie, but it's impossible to be bored while watching it.

The best way to stave off cabin fever while stuck at home is to keep yourself entertained, and one of the best ways to do so is by streaming Cats. It is certainly not a good movie, but like a digital fur-covered-train wreck, you will not be able to look away from it.

More like this
'Knock At The Cabin' May Start Streaming Sooner Than You’d Think
By Jake Viswanath
Stephen Graham & Steve McQueen Are Working On A Wartime Drama
By Darshita Goyal
Pamela Anderson’s Dating & Marriage History Could Be Its Own TV Series
By Jake Viswanath
Here’s Everything Coming To & Leaving Netflix In February
By Jake Viswanath
Get Even More From Bustle — Sign Up For The Newsletter
From hair trends to relationship advice, our daily newsletter has everything you need to sound like a person who’s on TikTok, even if you aren’t.