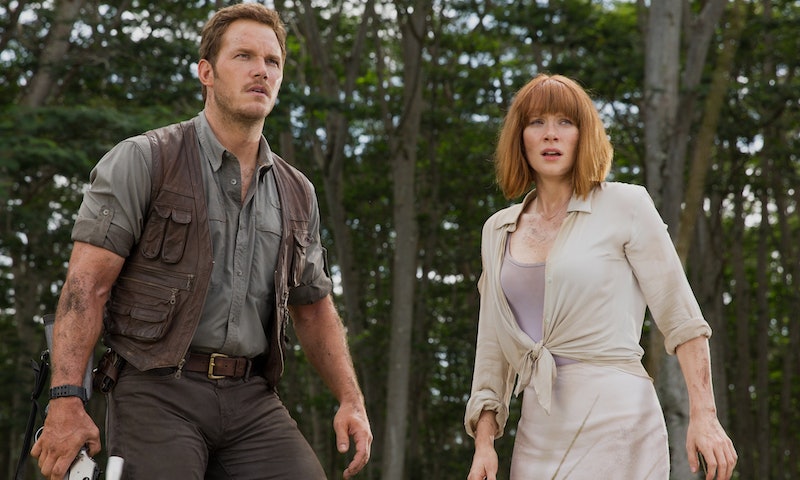 On June 22, Jurassic World: Fallen Kingdom finally hits theaters. If you've seen the first movie, 2015's Jurassic World, you know to expect plenty of action involving dinosaurs running amok and happily devouring humans. But if you didn't see that original movie, now's the time to do so — and luckily, you can stream the first Jurassic World pretty easily online.

Jurassic World was the fourth installment in the Jurassic Park franchise, and it was a major box office success. Raking in over $1.6 billion worldwide upon its release, it's still the fifth highest-grossing film of all time. And since it came out over three years ago, Jurassic World is now available on a number of streaming platforms. On Amazon, you can rent the movie for $3.99 or buy it for just $5 more. It's also available on iTunes for around the same price: $3.99 to rent and $9.99 to buy. It's also available to rent on YouTube, Vudu, and Google Play. Unfortunately, right now, Jurassic World is not available on Netflix.

Dino action aside, Jurassic World also had prompted some accusations of sexism from viewers. The backlash against Howard's character began when writer-director Joss Whedon tweeted that an initial scene released in anticipation of the film made Claire seem frigid and uptight, while Owen seemed fun and lovable. "Too busy wishing this clip wasn't 70's era sexist," Whedon wrote. But the movie's director, Colin Trevorrow, responded to the comment by saying, "The real protagonist of the movie is Claire and we embrace her femininity in the story’s progression."

The issue didn't end there, though, as Claire's treatment throughout the movie is still the subject of much debate. Some claim that as a powerful, non-nonsense woman, it's unfair that she's repeatedly sexualized throughout the course of the movie. Critics of her character highlight a major climactic scene that forces her to run for her life in high heels as proof of the film's supposedly sexist treatment of women.

But Claire, and that scene in particular, also have their defenders. Some people even believe that Jurassic World's Claire is actually a feminist hero. While she may not appear to be dressed for running away from dinosaurs, she is dressed for her own job, which is running a giant, corporate amusement park as a business. And more importantly, Claire's bravery and quick-thinking are ultimately what save Owen and her nephews from the mutant, hybrid dinosaur that plagues the park in Jurassic World.

Of course, whether or not you think Jurassic World treats Claire poorly or makes her a feminist hero is ultimately up to you — you're the viewer, and the movie is up to your interpretation. However you feel, let's hope that the new sequel, Fallen Kingdom, gives Claire some more awesomely feminist dinosaur fighting scenes, and that she's ever bit as business-savvy and quick thinking as when she was introduced in Jurassic World. Because really, would Owen and the rest of the guys be able to survive the dino attacks if Claire wasn't there to help them? We all know the answer — absolutely not.