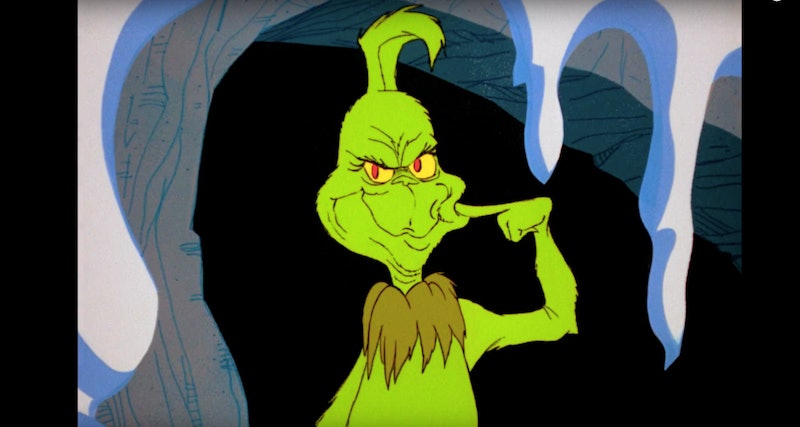 Now that Christmas is right around the corner, it's hard to think of anything better than catching up on some of the holiday season's most classic films. While there are many that come to mind, one that often tops the list of must see events is How The Grinch Stole Christmas. The movie is iconic for many reasons. However, figuring out when and where to watch the infamous Grinch's Christmas tale amidst the hustle and bustle of the holiday season can sometimes be a frustrating feat to manage. The franchise, which recently released its third adaptation featuring Benedict Cumberbatch in Nov. 2018, is one of the most beloved tales from everyone's favorite childhood storyteller, Dr. Seuss. Despite his initial disdain for Christmas and all of its frivolities, fans of all ages have remained completely enamored with the Grinch and his efforts to ruin the holiday for the town of Whoville for decades.

Whether it'd be the original 1966 cartoon version or the updated 2000 Jim Carrey led live action film, How The Grinch Stole Christmas is a yearly airing that you're not going to want to miss. And luckily, this December, both versions will be making way to television.

How The Grinch Stole Christmas (1966)

The cartoon installment, which is an adaptation of Dr. Seuss' 69-page 1957 book, was animated by Chuck Jones (the man behind also behind Bugs Bunny and Daffy Duck) and narrated by Boris Karloff. In 2013, Time listed it as one of the "10 Greatest Christmas TV Specials From Your Childhood." The made-for-television special will air twice this December, once on Sunday, Dec. 9 at 7:30 p.m. ET on TBS, and again on Tuesday, Dec. 25 at 8 p.m. ET on NBC, according to TV Guide. Decider notes that this version of the film is also available for streaming, purchase or rental through YouTube, iTunes, Amazon Prime, Vudu and Google Play.

How The Grinch Stole Christmas (2000)

The Carrey-led cinema, which also features Taylor Momsen, Molly Shannon, and Christine Baranski, became the highest-grossing film at U.S. box offices in 2000 and the second highest-grossing holiday film of all-time behind Home Alone, according to IMBd. The beloved film is scheduled to air on Christmas Day (Dec. 25) at 8:30 p.m. ET on NBC and will be available to watch several time throughout the month as part of Freeform’s 25 Days of Christmas, per Decider.

The Ron Howard directed live-action feature will air on the Freeform network on:

The film's 2000 adaptation is available for streaming on Netflix and can be rented or purchased on iTunes, Vudu, Prime Video, Microsoft, and FandangoNow.

Beloved by people of all ages, How The Grinch Stole Christmas is everything that your holiday heart needs and more.