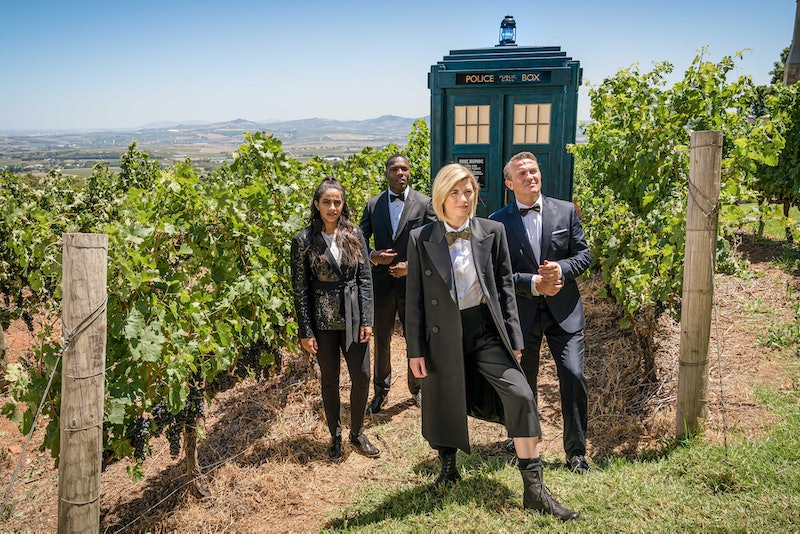 Forget hangovers (well, try to) because New Year’s Day is all about Doctor Who. Jodie Whittaker’s Doctor is returning for her second special, and it’s certainly going to start 2020 off to an exciting start. In true time-travelling style, it looks like series 12 will see The Doctor and her companions travel to some far-flung places, both on and outside Earth. So where was Doctor Who 2020 filmed, and can you visit them?

First, let’s start on home turf. As Gloucestershire Live reports, Doctor Who’s production team were spotted filming the series in Bristol back in late October. Daleks could be seen in formation on the Clifton Suspension Bridge, as a local tweeted at the time. “Met old friends for a curry and, on a whim, went for a stroll over the bridge,” @BristleBoy wrote. “Only filming the Dr Who Christmas special — nine daleks, in formation, on Clifton Suspension Bridge!!! You have been warned Bristol…”

Gloucester was also used for the twelfth series, mainly at the city’s 11th-century cathedral as Metro reports. Cast and crew were seen filming at the site earlier this year, and while there “wasn’t a lot of action taking place” fans gathered to watch regardless. Gloucester is rumoured to be used in an episode marking the return of the Judoon, a “rhino-like Intergalactic police force [that] will come face to face with the thirteenth doctor for the first time,” as Metro notes.

Of course, a new series of Doctor Who wouldn’t be complete without honouring Cardiff. The Welsh capital has been a hub for all things time travel since the show returned in 2005. In early October, fans spotted Bradley Walsh (Graham), Tosin Cole (Ryan), and Mandip Gill (Yasmin) filming scenes “on Tyndall Street near Lumis Student Living,” as TV news site CultBox notes.

On a more exotic note, series 12 also utilised locations outside the UK including South Africa. “We’ve done quite a lot of foreign filming,” showrunner Chris Chibnall recently told Yahoo! Movies. “Certainly episode one, I would say, is our most lavish, location-filled, action-packed episode, I think we’ve ever done.”

“[W]e filmed in South Africa, we filmed in various places across Europe,” he continued. “We try and do as much location filming as we can really because we were competing with some very big shows out these days.”

This marks the second time Chibnall’s Doctor Who has filmed in South Africa, as parts of series 11 also took part in the country, albeit rather secretly as Digital Spy reports. “The Doctor Who shoot was three weeks. It was warm, so that was good,” Jodie Whittaker revealed in Doctor Who Magazine. “The ambition was huge and the landscapes there — you couldn’t have got that [in England].”

This article was originally published on Dec. 31, 2019