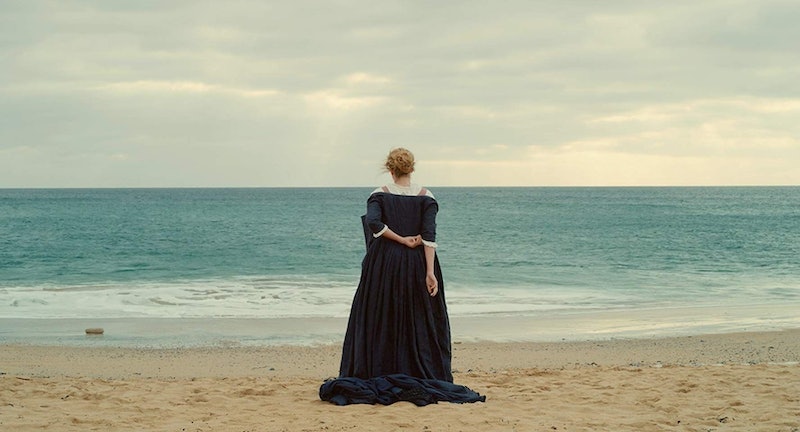 Portrait Of A Lady On Fire is a period romance between an artist and her subject. The film is set on a windswept, isolated, French island during the 18th century. With its coastal caves, and seasides aplenty it makes for a beautiful backdrop for this love story. It's also just a beauty landscape, plain and simple. So audiences may want to know, where is Portrait of a Lady on Fire filmed?

In Brittany, France, young artist Marianne disguises herself as a ladies' companion. She's been hired to paint a formal portrait of the unwilling bride-to-be, Héloïse, who's refused to sit for any painter. Sneakily trying to capture Héloïse's image, Marianne's surprised to find she's as much observed as observer, as she and Héloïse have a profound but brief love affair.

Set on an island, the beach was an important element to the film. It was shot on the rugged coast of Quiberon, an island commune off the southern coast of Brittany. Speaking to Le Telegramme, producer Adèle Haenel said the film's director, Céline Sciamma, had a distant memory of the area, but when they arrived, was afraid she'd remembered wrong. "We were looking on the bay side and were ready to leave without having found our filming location ... And then an assistant told us about Port-Blanc, the Ark. We both took a long walk on the coast from Le Vivier, and we got there ... I saw the smile appear on Céline's face...I understood that we had arrived at our filming location."

The remainder of the film follows both women and their companion and house servant Sophie as they create their own cozy world in an otherwise empty mansion. The home was shot at the castle of La Chapelle-Gauthier in the town of Seine-et-Marne in France. Those watching the film will be surprised to learn it's completely land-locked.

"Thanks to Céline Sciamma, we were able to transport our castle to the seaside," deputy mayor Maryline Alguacil-Preslier told La Parisien. The building dates back to the 17th century, and though in 2018 the Mission Bern —whose aim is to safeguard French heritage — designated it as historical, there weren't funds to properly restore it. Along came Portrait of a Lady On Fire. ""We agreed to a cash advance," continued Alguacil-Preslier. The money from the filming then allowed us to pay the companies that reinforced the square tower, whose roof was affected by water infiltration and threatened to collapse. So not only did the film capture the beautiful location for its own use, it likely preserved it for future visitors.

The film's haunting beauty is half in its locations, which serve as a lush backdrop for an impassioned love affair.

More like this
Vanessa Hudgens Is Reportedly Engaged To Cole Tucker
By Jake Viswanath
Pamela Anderson’s Dating & Marriage History Could Be Its Own TV Series
By Jake Viswanath
Keke Palmer Shares The Sex Of Her & Darius Jackson's Baby
By Jake Viswanath
Kukulkan From 'Wakanda Forever' Has A Surprising Connection To Marvel History
By Grace Wehniainen
Get Even More From Bustle — Sign Up For The Newsletter
From hair trends to relationship advice, our daily newsletter has everything you need to sound like a person who’s on TikTok, even if you aren’t.