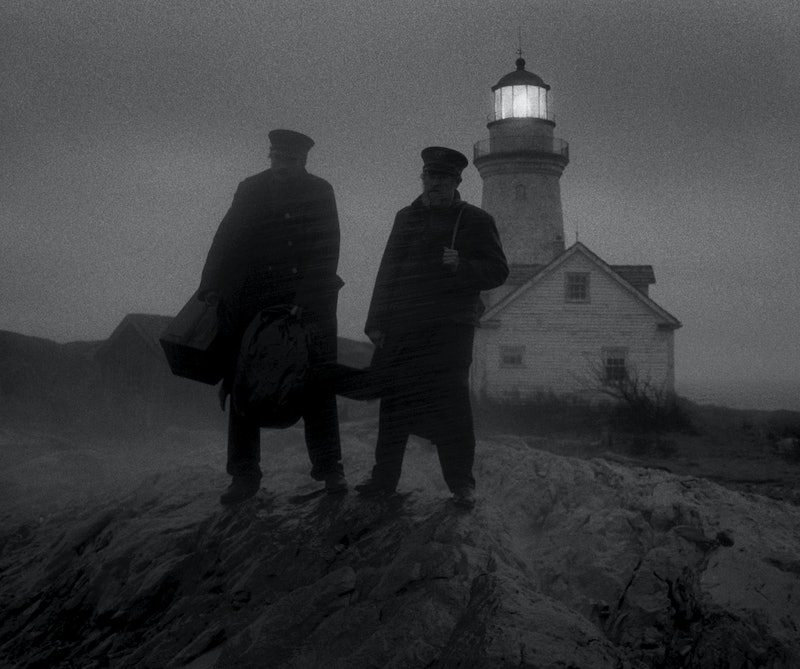 Filmmaker Robert Eggers doesn't give his characters breezy, comfortable lives — nor does he take it easy on his actors, his crew, or himself. For the The Lighthouse, the director's followup to his breakout feature The Witch (which made Puritan times look especially punishing, and that's before you even factor in the baby-eating crone), the 32-day shoot took place in the southernmost part of Nova Scotia, the real isolation and apocalyptic elements setting the stage for an epic power struggle between two lighthouse keepers (Willem Dafoe and Robert Pattinson) who take over a desolate post sometime in the 1890s. Rest assured that no CGI or green screen is behind those countless scenes where Pattinson's character Ephraim pushes a wheelbarrow up a craggy hill while being pounded by torrential rain. To make a movie about hell, you have to go there — at least, that's how Eggers feels about it.

"I enjoy it and, now, I'm addicted to it," the director, who co-wrote the movie with his brother Max Eggers, tells Bustle of setting these intense challenges for him and his team. "We all knew what we were signing up for. And we chose the location deliberately because it was going to be punishing and inhospitable, and it completely delivered."

In March and April, when The Lighthouse filmed in Halifax — in a fishing community called Cape Forchu, to be exact — the average temperature ranges from 20 to 40 degrees Fahrenheit, winds are heavy, and rain is frequent. Eggers says in the production notes that the movie's maritime consultant dramatically warned him before the shoot began that "people have died" there. But even that didn't scare the filmmaker off.

"Are we gonna shoot it in LA or against a green screen? No," Eggers said to Variety. "It's going out to have the elements mistreat you that makes [the movie] work." And the discomfort doesn't just pay off in the striking visuals of the film, it also brought out two staggering and dangerously unpredictable performances. "It helps you," Dafoe said of the demanding shoot. "It's a pleasure."

"Sometimes, it can be fun too," Eggers explains when we meet at A24's New York City offices. "The challenge of it. Certainly when you’re there on the day, and everything’s completely falling apart before your eyes, and you can barely move because you’re so cold, that’s not great." He pauses, then smiles. "But it’s cool to overcome it."

Eggers and his crew have the job of keeping the film together; meanwhile, Pattinson and Dafoe are positioned to free fall into madness, just as their characters do. To Esquire, the former recalled "sitting on the floor growling and licking up puddles of mud" — quite literally — as Ephraim becomes consumed by the mystery of the lighthouse. The scenes where his character is drunk on kerosene, Pattinson said he was actually intoxicated, to the point of "pissing [his] pants." Dafoe told the magazine, “It’s not like we hung out in between takes, joking with each other. It was demanding enough, and the weather was sh*tty enough that you did your thing, and then you went home."

In addition to the film's human performers, Eggers also had to ensure that their winged costars were up to the task. Thomas tells Ephraim early in the film that it's bad luck to kill a seabird, so naturally, the younger man is tormented by an ornery, one-eyed gull — perhaps the spirit of the unforgiving rock itself pecking away at his sanity.

"Are they legal to shoot with? In what countries? Can they be kept in captivity period? Are they trainable?" Eggers rattles off questions screenwriters should ask themselves before writing animals into their scripts. "I didn’t do any of that." The whole storyline was in jeopardy for some time, until executive producer Chris Columbus contacted the keepers who provided the owls for the Harry Potter series (of which he directed two films and produced three) to ask for a recommendation. That's how Eggers came to work with three English rescue seagulls named Lady, Tramp, and Johnny. "Being trained to do specific tasks keeps them from being depressed, right?" the director says of the trained birds. "So they’re really smart, really talented, and, unlike herring gulls of the wild, not malicious and evil."

For Eggers, establishing the progression of the lightkeepers' relationship — one minute they're physically tussling, the next they're slow dancing, the next they're ignoring each other — and the tone he wanted was almost as difficult as finding Oscar-worthy seabirds. With plentiful fart jokes and the pure ludicrousness of the horror of these men's lives, The Lighthouse earns real laughs, which was part of the concept from the beginning. ("I felt like, if I was going to explore misery again, I needed to have a sense of humor about it," the director says.) If anything, he worried that the film would "be too funny" when he saw his lead actors interacting on set. The Mark Korven's ominous score and the film's sound design, he says, played a big role in "tempering" the tone.

And, to his point, so do the extremely unpleasant circumstances under which they filmed. So don't expect his next feature to be a cozy, drawing room comedy.

"We were on the top of a mountain scouting the next thing and the wind’s going crazy," Eggers says of an unnamed upcoming project. "And one of the studio executives who was on both films was like, 'Alright, you’ve done it: It’s worse than the last one.'"