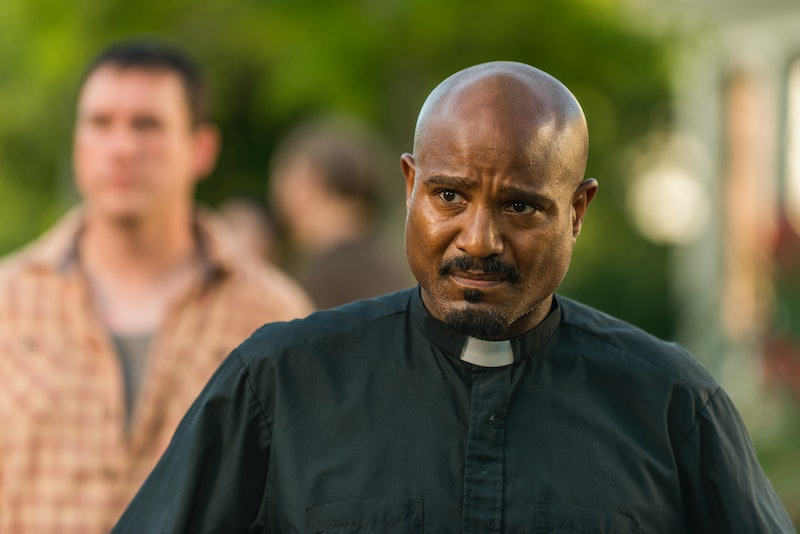 The Walking Dead is back, and with it come a few more switch-ups for our survivors. Daryl is seeking asylum, acting as a spy on the inside, and possibly stirring up a love triangle over at The Kingdom. Meanwhile, where is Gabriel on The Walking Dead?! The priest made a run for it, and it doesn't look good.

At the beginning of Sunday's episode, Gabriel was early to rise... and early to steal all of Alexandria's supplies before getting the heck out of dodge. When Rick's "scavenging" party returned from their visit to the Kingdom, they discovered the empty pantry. Some were willing to believe that Gabe had betrayed them, others not so much. After some searching, Rick found a note left presumably for him that included a single word: boat.

Was Gabriel going to recruit other people? When Rick went looking for him, our heroes were met with a creepy ambush. Even if that was the case, why would Gabriel deplete Alexandria's resources in the process? In the comics, Gabriel moves to the Hilltop, but I think he would have crossed paths with the group and gotten caught if that was the case on the AMC series.

Likely, this has something to do with the person who was following Aaron and Rick, the watching Gabriel with binoculars. It's most likely the person who lived in that island bunker, too. While it seems unlikely that this person made contact with Gabriel and managed to lure him away from the group in such a small amount of time, at least it means Gabriel isn't a traitor. After everything that our survivors have gone through on The Walking Dead, I wouldn't want something like that.