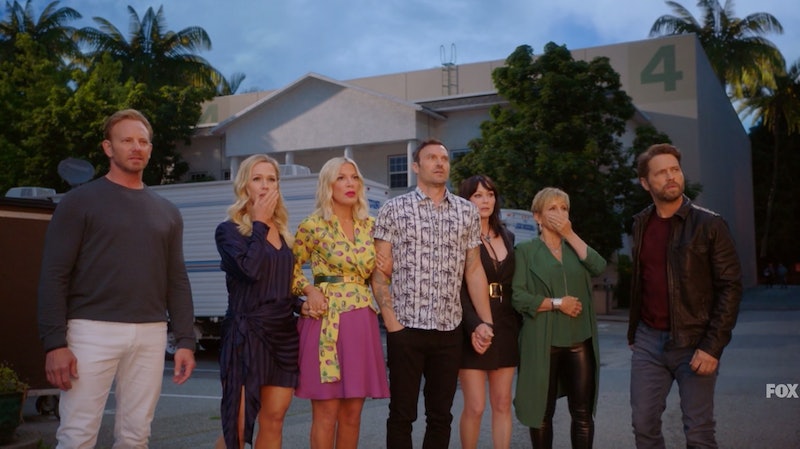 Even though the BH90210 premise was initially confusing to some, the show within a show found its footing eventually, striking a satisfying balance of fresh content and nostalgia. Still, it's tough not to look ahead as the first season winds down. Will this remain a mini-series with a six-episode run? Or will BH90210 return for a second season?

Unfortunately, there's no official answer to this question. However, BH90210 co-creator and actor Tori Spelling is very into the idea. In a recent interview with Access Live, Tori joked, "Well, the original went 10 seasons so we’re going to go for 11." If only. They need to get the green light for Season 2 first. In an August interview with Us Weekly, Spelling said, "We have so many stories to tell that this could keep going season after season, so we hope it does [get renewed].” She not-so-subtly hinted, "We would love to continue to work together."

Spelling also remarked, "It’s been such an amazing experience. I liken it to high school when you think, ‘Oh, you never get a chance to do a do-over, and there are things that you know now that you didn’t know then that you would’ve done differently and we get that opportunity."

In that same Us Weekly article, Spelling's BH90210 costar Shannen Doherty seemed much more hesitant about the idea. She declared, "I think we should just focus on the six [episode run] because — no projecting into the future."

She elaborated, "Right now, it’s this very awesome miniseries special event that’s very cool, and I personally love that because I think the audience gets in, they get that flavor of all of us, what they wanted to see us doing, they get some nostalgia in there for summer. It’s the perfect summer thing."

So, maybe the show can return for Summer 2020, then? Or maybe sooner. After all, the original show's first summer season is what catapulted the series into major success — remember that summer of Kelly and Dylan? So hot.

Not only is Spelling down for a BH90210 Season 2, she has already thought about how it would be structured. In an Aug. 14 interview with E! News, she shared, "This season you'll just see us kind of getting back together and finding our friendships again, and starting to film the reboot, so next season would be like a full-on reboot, so it would be a show within a show."

And, who doesn't want that? If we can't get a full-on reboot with the original characters, a show within a show is great, especially since it basically means the fans get two different shows to enjoy. Sort of.

Spelling's not the only one who's been thinking ahead. The fans are on board as well. In August, Spelling's co-creator and costar Jennie Garth dished on the show's unique concept and the fan reception.

Hopefully, the network wants this show renewed as much as Spelling does. And if Shannen isn't all that into it, it would be a great callback to the original if she dipped out, right? If anything, hopefully fans have news of a second season soon.