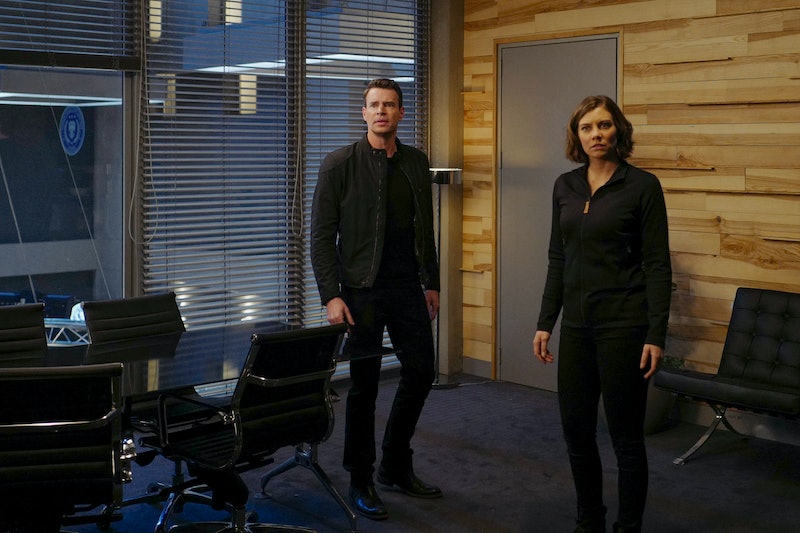 The mission is officially over: Whiskey Cavalier has been canceled after just one season. It's a shocking turn for the show, which was advertised heavily during the Academy Awards in February. A flirty, big budget, globetrotting spy dramedy led by two well-known actors, Scandal's Scott Foley and The Walking Dead's Lauren Cohan, seemed like an instant recipe for success. But unfortunately, Whiskey Cavalier's viewership wasn't up to par for ABC, with the 10 p.m. time slot likely playing a role in its less-than-stellar numbers.

According to Deadline, the first episode brought in 4.7 million viewers, but that steadily declined throughout the season, hitting 2.5 million by its fourth episode, per TV Line. However, Deadline also reported that despite the low ratings, the cancellation was a tough decision to make for the studio. "We thought we gave it a very strong launch in spring. But we lost audience," ABC Entertainment president Karey Burke said at a recent Disney press conference. "We felt the biggest opportunity was to try something new. We looked for other time slots but did not see a real opportunity to grow."

There seems to have been more at play though, with journalists pointing out that being a Warner Bros. production may have hurt the show's chances of continuing to air on ABC. Maureen Lee Lenker at Entertainment Weekly wrote that the show "drew similar viewership to renewed ABC drama The Rookie, but its international production costs and outside studio (WB TV) may have contributed to its axing."

Nellie Andreeva at Deadline agreed, writing that "I hear factoring in the cancelation decision was the fact that ABC, also at the last minute, moved in to pick up to series NBC drama pilot Emergence, which is produced by ABC Studios." In light of this, the cancelation is less surprising (though no less frustrating for fans), as networks increasingly move towards consolidating their own content onto their own platforms.

Still, not all hope is lost. There are reports that WB is shopping Whiskey Cavalier to other broadcasters. As a result, fans of the show have started up the #SaveWhiskeyCavalier hashtag on Twitter, with creator David Hemingson, producer Dean Lopata, and Foley encouraging everyone to join in. It's clear the show does have a dedicated fanbase, but with streaming platforms changing the way we watch TV, they just aren't watching at traditional broadcast times. TVLine notes that if you include DVR playback, Whiskey's most recent episode "enjoyed the third-largest boost of any ABC series."

While it often feels like FBI and CIA shows are a dime a dozen on broadcast TV, Whiskey Cavalier feels unique, balancing out the the high-stakes drama with lighthearted comedy and a compelling relationship between the two leads. It also amusingly flips the kind of gender roles you would expect in a hard-boiled drama. Foley described his character Will on Live with Kelly and Ryan as "an FBI agent who has high emotional sensitivity," seen most clearly in the pilot when he's introduced sobbing over his ex-fiancé while he blasts "Total Eclipse of the Heart." In contrast, Cohan told ET that her character Frankie is "the most mission-oriented person on the team" and that their dynamic is "Mr. and Mrs. Bond. They're just designed to infuriate each other."

Considering the show already has the talents of Foley and Cohan lined up, along with a strong supporting cast, it would be a shame if Whiskey Cavalier wasn't picked up by another network. We don't know who Warner Bros. is talking to, but hopefully the discussions also include streaming platforms — shows like Lucifer, Arrested Development, Community, and The Mindy Project all found life online after being canceled by their respective networks.

There's no word yet from Warner Bros. about how the talks are going, so until there's more news, fans will just have to keep their fingers crossed that Whiskey Cavalier will be back.

More like this
The 'New Amsterdam' Series Finale Opens An “Unexpected” Door To The Future
By Brad Witter
The 'Hunters' Creator Wanted The Series Finale To Serve As A "Catharsis"
By Brad Witter
The 'Gossip Girl' Reboot Creator Is “Looking For A New Home” To Air A Potential Season 3
By Brad Witter
There’s *Already* A New Season Of 'The Traitors' To Dive Into
By Sophie McEvoy and Sam Ramsden
Get Even More From Bustle — Sign Up For The Newsletter
From hair trends to relationship advice, our daily newsletter has everything you need to sound like a person who’s on TikTok, even if you aren’t.