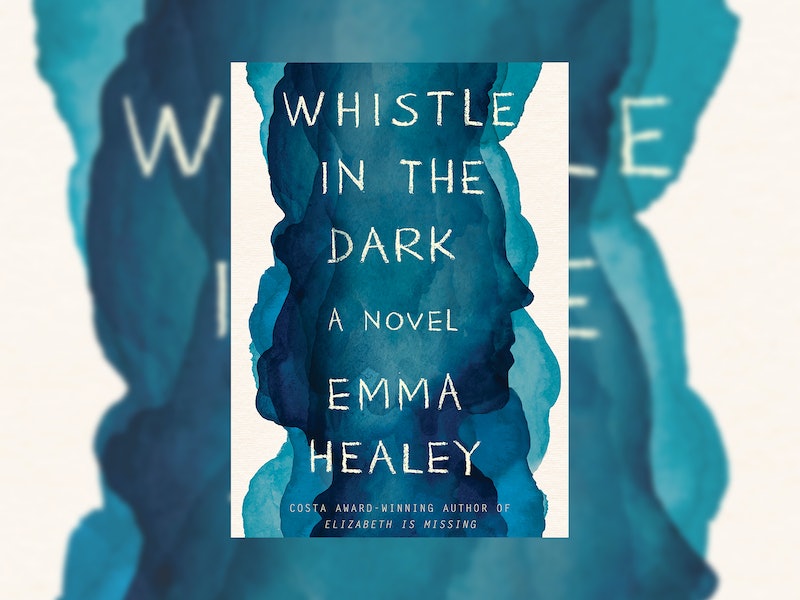 I'm not a parent, but I can imagine there is nothing more terrifying than the idea of your child going missing. But what if the bad dream happens? And what if it doesn’t end when your son or daughter walks through the door? What if it is only the beginning of the nightmare? In Emma Healey’s Whistle in the Dark, a searing new novel about the shared pain of mental illness and constraints of motherhood, one woman struggles to cope with the effects of her daughter’s sudden disappearance, and the suspicious circumstances of her return.

After four excruciating days, Jen and Hugh Maddox get the news they’ve been praying for, but not necessarily expecting: their teenage daughter, Lana, has been found alive. Except for a deep cuts on her head and a handful of bumps and bruises, she seems to be okay, if not a little traumatized from her experience — one she says she cannot remember. According to Lana, she simply got lost, but Jen suspects there is more to the story about how her daughter left their shared vacation room in the middle of the night and disappeared. Was she running away? Did she get kidnapped? Did someone hurt her?

While Hugh feels nothing but relief that his child is safe, Jen’s own reassurance is tampered by doubts about Lana’s story. "And she kept her mouth shut, though the questions rattled around her head, and she kept her hands steady, though she wanted to shake her daughter awake and demand an explanation," Healey writes. "A desperate rage ran through her like a wick. It scared her, this anger, unfocused and physical, and she wasn’t sure she could trust herself.”

Whistle in the Dark, $8, Amazon

After getting the approval of the doctors, Jen and Hugh take Lana home in the hopes their lives can go back to normal, but they quickly realize how challenging that may be. Obviously experiencing trauma from her mysterious four days in the woods, Lana adopts strange behaviors no one — not Hugh, and not Jen's older daughter, a single, newly pregnant lesbian who has always competed with Lana for Jen's love — seems to notice. No one, that is, except Jen.

Is Lana blinking more than usual? Does her voice sound different? Is that her bedroom light on in the middle of the night? Despite being home, safe and sound once again, Jen can’t shake the feeling the girl in her house isn’t her daughter, but rather a stranger, “some mythical creature, a unicorn or a griffin, which they had no idea how to care for.”

Of course, Jen’s fears and anxiety are more than worrying about Lana’s depression, her self-harm, or her disappearance. Like any other parent, she worries about whether her daughter is being bullied, whether she is being safe online, whether child predators and creepy older men on the internet are after her. Her entire life, it seems, is taken up by one thing: motherhood, and all of the fears and anxieties that go with it.

And there are the anxieties she feels for herself, too: Now that she has daughters, is “Mum” the only identity she can claim? Is caring for her children, worrying about their health, happiness, and well-being, the only hobby she is allowed? At times, it feels to Jen as though her relationship with Lana is a “burden of love.”

“Why did she have to drag this love around everywhere when, sometimes, she’d like to leave it behind for a few hours," Jen wonders. "Without that love, she could float away, let her daughter’s mood improve, let her put her frown and her sharp tongue back in their still-shiny packaging. Without that love, she could be light, untethered by their shared genetics, by the memory of Lana as a baby, or by the pride she felt in her wit, even when it was aimed fiercely at her.”

As the novel progresses, fear and paranoia settle over every sentence, but not just because of Lana's peculiar behavior and the mystery of her disappearance, and not because of the sinister secrets Jen is convinced she's keeping, or the hidden monsters she is sure are lurking just around the corner. Jen, overwhelmed, not sleeping, and unable to think about anything else but her daughter, elicits a different kind fear: one of being trapped, imprisoned in your own life, and in your own family. Readers will start to wonder, is Lana really hiding something, or have the pressures of motherhood and the trauma of losing her daughter pushed Jen into an unstable state? Is Lana actually acting suspicious, or is Jen suffering from some kind of psychological breakdown of her own?

Of course, you have to read Whistle in the Dark to find out for yourself, and I suggest you do so. A powerful novel about shared trauma, the effects of mental health on the family, and the pressures of motherhood, this is a slow-burning and utterly unsettling domestic thriller you will have a hard time putting down.