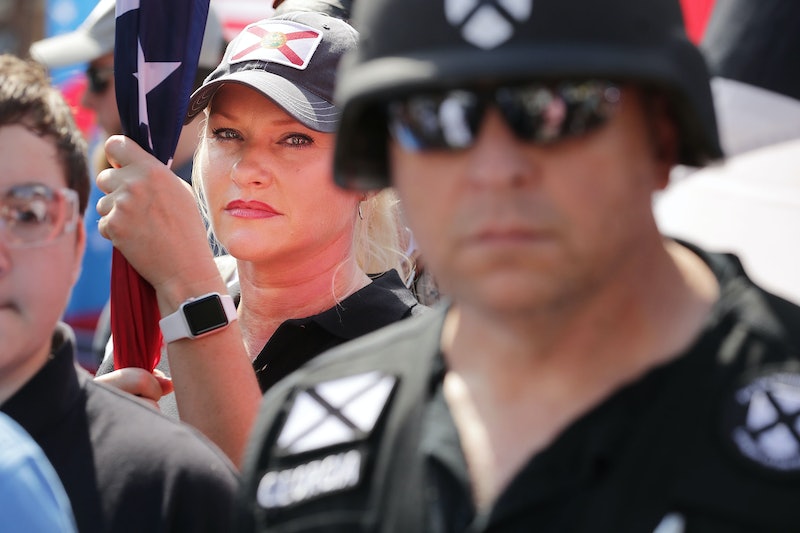 Over the weekend, a rally in Charlottesville, Virginia turned violent after white nationalists took to the streets, leading to many conversations about race relations in Trump's America. Although the faces of the Charlottesville "Unite the Right" protesters were overwhelmingly white and male, it would be misguided to ignore the role that white women have always played in white supremacy.

Certainly, many white women haven't been sitting on the sidelines when it comes to supporting and/or being complicit in agendas and systems that oppress people of color. As the often-cited NBC News poll showed, 53 percent of white women voted for Trump, whose appeal to white nationalist and anti-social justice bases has been well-documented. That said: White women's roles in racist movements has a much longer history.

As The Cut notes, for as long as there have been groups of white supremacists terrorizing people of color, there have been prominent white women among their ranks. These are women who not only reap the benefits of the racist systems that prioritize them and support the white supremacist men in their lives, but also rally for those bigoted causes themselves.

As Kathleen Blee, a historian and expert on the role of white women in racist movements writes in her book Inside Organized Racism: Women in the Hate Movement, white supremacist groups recruit women to their causes to both support and motivate them. Soon enough, the groups (prone to sexism as they may be) began recognizing white women as "activists in their own right."

In creating an image of white women, racist groups draw on the widespread tendency of the middle classes in Western societies to equate women with virtue, along with frivolity and shallowness. They portray Aryan women in four general and somewhat contradictory ways: as ethereal Nordic goddesses and racial victims, as potential "race traitors," as wifely supporters of male racial warriors and bearers of the next generation of Aryans, or as racist activists in their own right.

Figures like Elizabeth Tyler (who Blee wrote about in her first book Women of the Klan) also worked to recruit other women to join the causes of the KKK, recruiting tens of thousands of new members and considered a leader of the group.

As Laura Smith wrote for Timeline, Tyler even started the WKKK (the women's branch of the Klan) that was considered better at couching their racist ideology in campaigns for "social welfare" in ways that didn't immediate reveal themselves to be racist. She organized that base of white women to support racist laws against immigration, interracial marriage, and desegregation in a far more insidious way.

Whether you're examining the events that led to the lynching of 14-year-old Emmett Till, the woman-run Ku Klux Klan chapters, or the dog-whistling rhetoric describing other races as rapists or criminals, the narratives that place white women as potential victims who need to be protected have prevailed at the expense people of color. And that's without even considering the more insidious and active roles white women played in maintaining systems that segregate and subjugate men and women of color.

More importantly, the tradition of enabling and benefitting from these systems is alive among white women. Sure, it's apparent in the dog-whistling rhetoric of pundits like Tomi Lahren and Anne Coulter, but it's just as prevalent in less extreme circles. After all, the communities that raised the crowds of angry, white men marching in Charlottesville contained more than their fair share of angry white women and complicit white women, oblivious white women and pearl-clutching #ThisIsNotUs white women.

Like so many complicated realities of race relations, it's not about faults or hurt feelings — particularly the feelings of individuals who benefit from racial privilege that aren't putting their bodies on the line. It's about recognition of the ways systems of oppression hurt people based on arbitrary factors and historical prejudices. But, until we can look directly at this past and present without performative shock, without denial, without prioritizing fragile white feelings, the sooner we can make progress toward dismantling those systems.