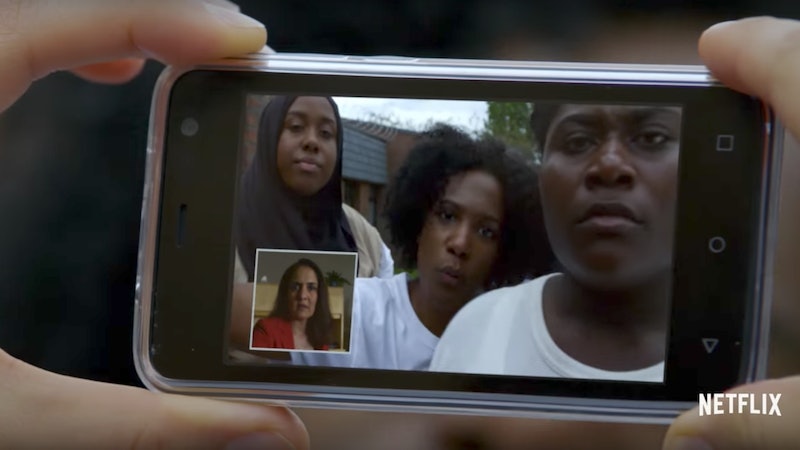 The latest trailer for Netflix's Orange Is The New Black Season 5 contains so much drama. From holding a seance, to conducting an uprising in Litchfield over their terrible living conditions, the inmates are facing plenty of new challenges. But one of the most dramatic things that appears to be happening involves the media. On several occasions throughout the new Orange Is The New Black trailer, inmates are given the opportunity to list their demands and engage with the outside world regarding their needs. So, who is the woman the inmates are video-chatting in the OITNB trailer for Season 5?

As well as having access to a cell phone with a seemingly great data plan, the inmates appear to have acquired the contact info for someone on the outside who they need to talk to. The woman on the call is presumably a journalist, or someone with some political sway. But considering the exchange is less than polite, it's unclear how effective the video chat will be: "Tell this woman what we want." "We want to be mother-f*cking taken serious." "Hell, yeah."

As a group of journalists are shown gathered outside the prison, and camera flashes are going off continually, it seems likely that Litchfield has made the primetime news yet again.

It's possible that the woman in the video chat is writing an article about the inmates at Litchfield, and the terrible conditions they've been subjected to. She could also be investigating Poussey's death, and has somehow managed to get a phone to the inmates. Another possibility is that she could be attempting to broker a deal between the inmates and the management company running the prison.

Other options include that the woman could be somehow connected to law enforcement or a political office, and is interested in fixing the situation by liaising directly with prisoners. It seems as though the press angle is the most likely, but based upon the new trailer, anything is possible in OITNB Season 5.

Luckily, since the new season hits Netflix in June, we'll only have to wait a few more weeks to find out who exactly the inmates are talking to.