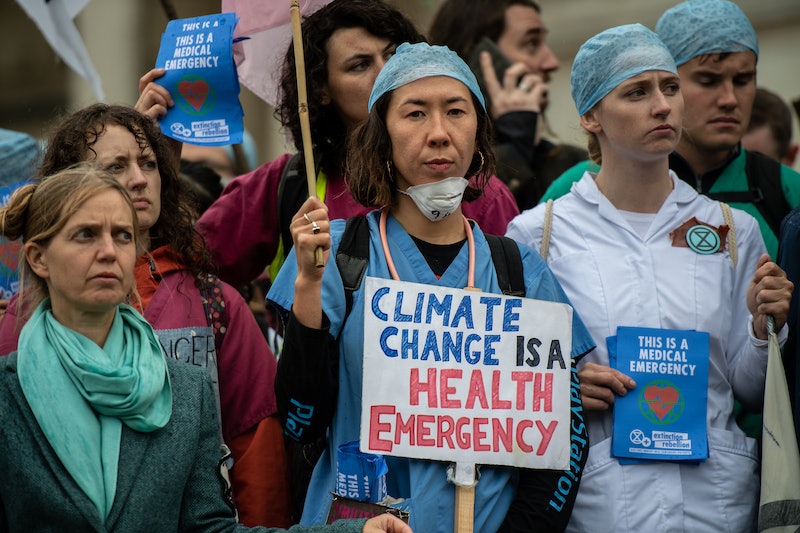 Over the past 12 months, the controversial environmental movement Extinction Rebellion (XR) has dominated the headlines in relation to ongoing concerns over the environment and climate change. Taking a behind the scenes look into the worldwide protests is Channel 5's latest documentary Extinction Rebellion: The Inside Story, which follows those at the heart of one of the biggest non-violent acts of civil disobedience the UK have ever seen. The doc will also explore various groups formed within the movement, but who are the Rebel Elders and Doctors for Extinction Rebellion? Well, despite all seemingly having the same goal, it turns out the varying subgroups buried within Extinction Rebellion have different origins and ideas, and here's everything you need to know.

if you're unfamiliar with the environmental protest group, Extinction Rebellion is described by Doctors For XR as a "socio-political movement" which aims to utilise "nonviolent resistance to avert climate breakdown, halt biodiversity loss, and minimise the risk of human extinction and ecological collapse." Here in the UK, the group has three main demands — that the government declares a climate and ecological emergency, that those in power act now by reducing greenhouse gas emissions to net zero by 2025, and that the government works beyond politics, by creating a Citizens Assembly on climate and ecological justice. Thankfully, Channel 5's newest documentary is here to shed light on some of last year's highly-publicised protests, and here are two of the most intriguing groups at the heart of this ongoing call for action.

Doctors for Extinction Rebellion describe themselves as a Doctors collective, who have decided to "undertake civil disobedience" due to their belief that climate change is a "public health catastrophe." After carefully considering their stance on the issue, the group have admitted their status as highly-respected professionals isn't usually what most would associate with a cause committed to openly breaking the law — however, due to "the severity of the crisis," Doctors for XR state their decision and actions are justified. The group also cite their profession as being one of the primary inspirations for speaking out as part of Extinction Rebellion, and claim that a doctor who ignored a level of risk this severe, should "rightly be struck off for negligence."

In a recent interview, Former A&E doctor Vishal Chauhan, who ditched his profession to become an active Doctors for XR campaigner, opened up about the motivations behind the group, and speaking to the Guardian, Chauhan explained that as a doctor, he has a duty of care to act in the interests of patients — and as it stands, the greatest threat to the health of the British people is "the chaos that will ensue" from climate change if nothing is done.

Although not a nationwide group, the Rebel Elders for Extinction Rebellion still have a powerful influence on the movement, and have been at the forefront of the protests which shook the world back in 2019. Based in Bristol, the group consists of retirees with a passion for the environment, and are known to dress in silver gowns during protests. As the Guardian reports, the Rebel Elders promote the same three demands upheld by most XR supporters, and was formed with the help of retired nurse Sue Kilroe — who campaigned tirelessly on the streets on London back in October 2019. Speaking of her experience in the Extinction Rebellion community, Kilroe explained that "working with other explicitly older people within the organisation has been immensely pleasurable," and revealed that her reasoning for joining stems from "a sense that since our generation are, in part, responsible for global warming, working for change within XR feels just."

Extinction Rebellion: The Inside Story airs on Sunday, February 16 at 9 p.m. on Channel 5.

More like this
Eurovision Has Been Given A Whole New Look Ahead Of Its Liverpool Debut
By Bustle UK
'Brookside' Is Coming Back & Soap Opera Fans Are Going Wild
By Sam Ramsden
'Love Island' May Have Just Lost Its Main Character
By Jason Okundaye
Vanessa Bauer Is Reportedly Dating Her 'Dancing On Ice' Partner
By Darshita Goyal
Get The Very Best Of Bustle/UK
Sign up for Bustle UK's twice-weekly newsletter, featuring the latest must-watch TV, moving personal stories, and expert advice on the hottest viral buys.