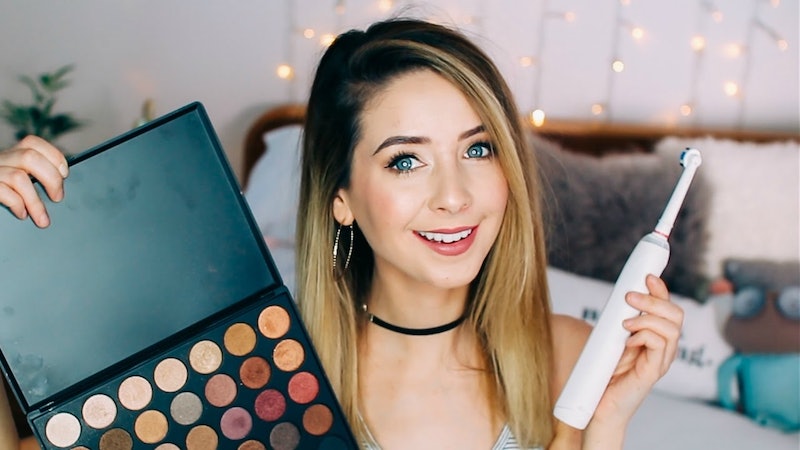 In case you were wondering about all of the top beauty influencers in the world, Forbes has 100 percent got you covered: The financial magazine created a list today naming the top influencers in the beauty, fitness, and home worlds — with categories like comedy, fashion, and gaming to follow throughout the year.

You may know Forbes for their lists detailing the top billionaires, the richest couples, and the like — but this year, they've branched out to the complex and growing world of social media fame. As Forbes staff writer Clare O'Connor explains in a press release sent to Bustle, "This year, we decided it was time to take a look at folks using social media to earn both fame and, in many cases, multi-million-dollar fortunes. We'll continue to track this burgeoning economy, which will evolve as platforms like Snapchat rise in prominence and brand new competitors inevitably emerge."

Vice President of Forbes Women's Digital Network Christina Vuleta was quick to concur: "These social innovators are creating markets around their lives, and passions — and fulfilling a need for millions of people who want to hear from them versus a traditional brand sponsor."

And as for who made the top spots for the competitive realm of beauty bloggers? There are a lot of familiar names on the list, but you might be surprised by the order — there are some upsets and dark horses in the mix as well. Let's take a look at the top five:

Zoella's long been appearing on lists like these as one of the top beauty vloggers in the world, and it's not hard to see why — her channel boasts close to 12 million subscribers, and her most popular video has been viewed over 20 million times. And that's not even talking about her various entrepreneurial pursuits, including her recent lifestyle line.

Though she recently took a long hiatus from beauty blogging due to personal reasons, it looks like Michelle Phan is poised to re-enter the fray — especially since she's relaunching her Em Cosmetics beauty brand. Either way, it should come as no surprise that she sits near the top of the list — plus, there's also her hugely popular beauty subscription service Ipsy to consider, as well as the fact that her videos have racked up over a billion views over the years.

With her makeup line Huda Beauty continuing to make major waves on the beauty scene, Huda Kattan's place at number 3 is completely deserved.

Between her recent partnership with Too Faced, and her practically iconic Power of MAKEUP! video, astronomically popular vlogger NikkieTutorials is still majorly on the rise. Who knows what's next?

Based in Australia, Shannon Harris' YouTube channel has almost 3 million subscribers, and she's got plenty of beauty collaborations under her belt to boot (including her own venture, xoBeauty).

Did the top five fit your expectations? Were there people you expected to rank higher (or lower)? Head over to Forbes to check out the rest of the top 10 — and indeed, the top influencers in the fitness and home categories as well.