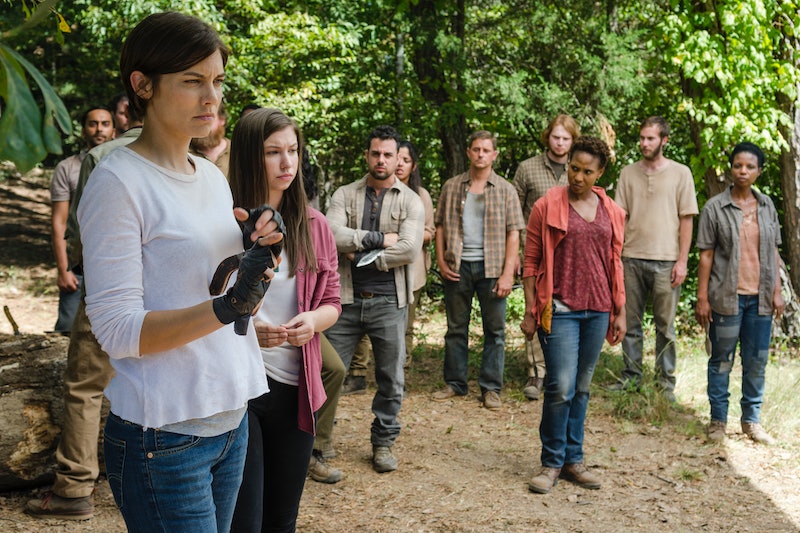 With only a few episodes left in Season 7, the Walking Dead war against the Saviors is rapidly approaching and trust me, it’s not going to go down without some casualties. So, who’s going to die on The Walking Dead? Although I normally look to the comic books for clues as to what’s coming, that's not going to be as helpful as usual this time around. Most of the characters who die during the war in the comics are already dead on the TV show, which means that in their place, fans could be losing people we care about in the Season 7 finale. Spoilers for The Walking Dead comics ahead.

In the comic books, multiple characters die during the war against the Saviors. Richard, who Morgan killed in the March 12 episode, is one of the victims, as are Denise and Nicholas, both of whom died last season. There are two characters who die in the comics that are still around on the AMC series. The first is Eric, Aaron’s boyfriend, who is shot in the head by a Savior when they storm the Sanctuary and collapses into Aaron's arms in a devastating scene. The second is Shiva, Ezekiel's pet tiger, who is killed by zombies while protecting him. I hope that The Walking Dead strays from the comics and keeps these characters alive, but either way, others are bound to lose their lives in the battle — and some are more at risk than others.

Ever since Abraham’s death, Rosita has been acting much more erratically and I think her rush to kill the Saviors will be her downfall. War takes time, patience, and strategy, and Rosita has none of those things right now. I think she’s the most likely person to die in the next few episodes.

Benjamin’s death hit Morgan hard and his emotions may get the best of him in the war. And in January, Deadline reported that Lennie James will write and star in new series Gone on the UK's Sky. That could be a sign that Morgan won’t make it through this season of The Walking Dead, giving James more time to work on his new project.

We know that Negan probably won’t die in the war, but someone major from the Saviors has to. It makes sense that Simon, Negan’s second-in-command, will fall. It could also be Dwight, but I’m rooting for him to make it through.

Sasha’s willingness to go along with Rosita’s dangerous plan puts her at serious risk too.

Tara seems to be removed from the main storyline on The Walking Dead, so her death wouldn't have as many repercussions on the plot, and I just have a feeling that she won’t make it through the season.

Dwight may have been able to keep Sherry safe after fleeing the Sanctuary, but if she joins Alexandria to fight in the war, I don’t think she'll survive. She would be a prime target for the Saviors in a battle, especially Negan, who thinks she's dead.

Father Gabriel was finally somewhat useful this season, but he’s still a pretty weak character when it comes to fighting. He’s gotten by on luck in the past, but I’m not sure he’s going to be able to slip by this time.

Carol is one of my favorite characters and one of the strongest women on the show, but if we have learned anything from The Walking Dead over the years, it’s that the series has no problem destroying fans. That’s why Carol is on the list. Her death would shatter viewers, much like Glenn's did, and that may be tempting for the writers.

There's no way around it, war means casualties. Let's just hope that The Walking Dead doesn't take away too many of our favorite characters at once.