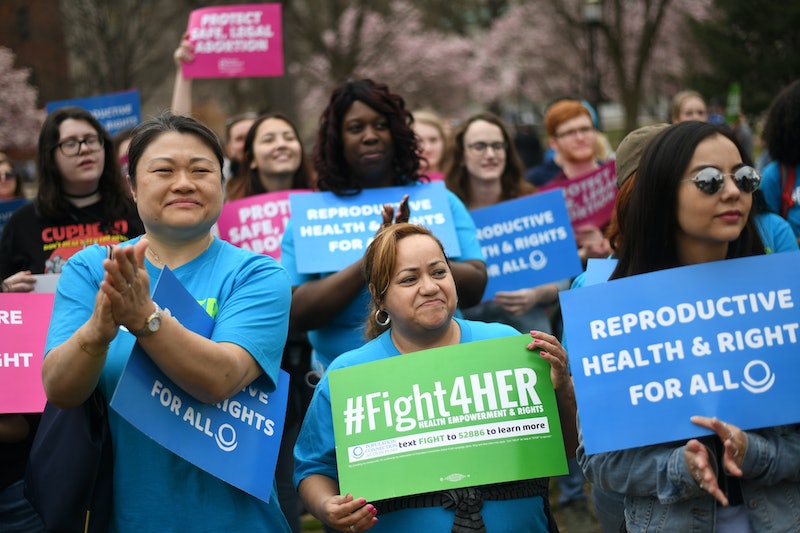 Alabama's new anti-abortion law, which criminalizes performing the procedure at any stage, with no exceptions for rape or incest, will no doubt have sweeping effects throughout the state. But that doesn't mean all pregnant people will be impacted in the same exact way. Reproductive rights experts tell Bustle that who Alabama's abortion ban will affect the most are those who are already marginalized. These experts have seen similar consequences result from restrictions previously signed into law.

"Laws like this, whether they're abortion bans or other mechanisms to restrict access to abortion, always have a disproportionate impact on women who already have barriers to accessing health care," Rachel Sussman, the national director of state policy and advocacy at Planned Parenthood Action Fund, tells Bustle. "Women living in rural communities, women living in poverty, women of color who are already facing systematic barriers to care."

Though Alabama's governor signed the anti-abortion ban into law, it's important to remember that abortion is still legal in the state until the ban takes effect. The soonest that could happen, according to CNN, is in six months. Anti-abortion laws, once they do take effect, are disproportionately harmful to women of color, in part, because there's already a significant racial disparity in maternal death rates in America. Black and white women in Alabama give birth at roughly similar rates, according to March of Dimes, and yet black Alabamans are much more likely to die during childbirth. According to United Health Foundation, 27.6 out of every 100,000 black mothers in Alabama die from pregnancy-related complications, compared to 5.6 out of every 100,000 white mothers in the state.

More broadly, women of color are more likely than white women to have no health insurance, according to the Kaiser Family Foundation, and are far more likely to live below the poverty line, according to the Institute for Women's Policy Research. Those factors already make it harder for women of color to obtain abortions, and laws like Alabama's only exacerbate their struggles.

People living in rural communities who seek abortions face a different obstacle: geographic isolation. A 2017 study found that around one-third of women in rural areas who sought abortions had to travel over 100 miles to get to a clinic. This can require going out of state in some cases, which for many people simply isn't an option, given the time and resources such a trip requires. In Alabama, anti-abortion laws have slashed the number of abortion clinics in the state. There were 13 abortion clinics in Alabama in 2000, according to AL.com, and today there are just three.

Heather Shumaker, senior counsel at the National Women's Law Center, agrees that economic status and geographic location both play a huge role when it comes to access to safe abortions. She says that near-total abortion bans like Alabama's "impact the people who have the least resources to go to a different state to get access, or who have the least access to other health care already."

"The people who are already struggling with all of these different restrictions that have already been passed, and who are already living paycheck to paycheck, those are the ones who are going to really feel the impact of this bill if it were to become law," Shumaker tells Bustle.

Alabama's law may be stricter than any other yet enacted in the United States, but many other states have passed draconian abortion restrictions in recent weeks. Days before the Alabama ban passed, Republican Georgia Gov. Brian Kemp signed a law that bans abortion after six weeks and imposes criminal penalties on women who go out of state to have abortions. Ohio's governor signed a similar bill into law in April.

"There have been, in 2019, 296 abortion restrictions introduced at the state level," Sussman tells Bustle. "Almost half of those are a version of an abortion ban, which is up 60 percent over the abortion bans we saw pending last year."

Amanda Thayer, the deputy national communications director at NARAL Pro-Choice America, explains that regardless of what form these abortion restrictions take, they all hurt the women who are already struggling the most.

"All of these extreme bans — Alabama, Georgia, Ohio, all of these laws that ban abortion as early as six weeks, or even before that [as] in Alabama — they always disproportionately harm women and families of color, women of lower incomes, women living in rural areas," she tells Bustle.

If the recently passed anti-abortion laws concern you, here are some ways you can support abortion providers, abortion funds, and women in Alabama in particular.