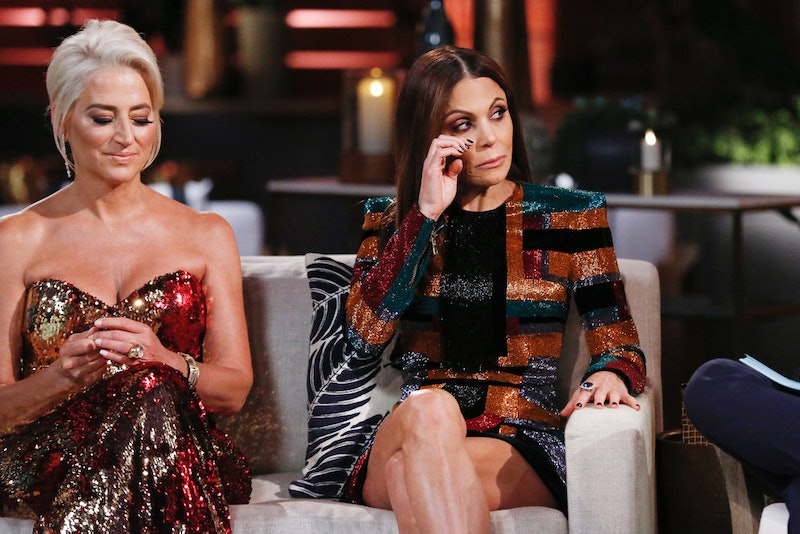 Even though one of Bethenny Frankel's most iconic lines is "mention it all," she doesn't always, especially when it comes to her love life. The reality TV legend manages to keep that pretty private. She has mentioned things here and there, but without much detail. However, Bethenny talked about her boyfriend Paul Bernon during the first part of the Season 11 RHONY reunion and cleared some things up.

During the first reunion episode, Andy Cohen prompted Bethenny, "In the midst of grieving for Dennis [Shields], you get hot and heavy with your current boyfriend Paul." That's when she divulged:

"Last Christmas I went out on a date. I remember telling Tinsley [Mortimer]'I really like him.' And I felt like an idiot because I was saying I felt like it could be the one or something. I was really into him and we went out a couple of times. And I just wasn't really ready. I was too needy if that makes any sense. I wanted someone to give me a guaranteed 'this is the guy' because I didn't want to get hurt."

At another point in the episode, Bethenny admitted that she would "date intermittently" because she and Dennis were so on and off. Once Dennis passed away, Bethenny reconnected with Paul. She shared, "He just came back and really courted me and it was great because I had a history with him."

According to Us Weekly, part of that history includes some paparazzi photos. Bethenny and Paul were first spotted kissing in public while they were in Boston in October 2018. In December 2018, Bethenny was hospitalized after a severe allergic reaction to non-shellfish. She tweeted all about the scary experience and gave Paul credit for saving her life.

A few days later, Bethenny and Paul went Instagram official. On Christmas Day 2018 when she shared a photo of them in the Dominican Republic.

In April 2019, People reported that Bethenny and her daughter Bryn vacationed with Paul and his two children in Playa del Carmen. Time with each other's kids is another indication that their relationship is very serious, you know, aside from that whole saving her life thing.

Even though Bethenny doesn't want her relationship showcased on Real Housewives of New York, she did open up a bit during a July episode of Live With Kelly & Ryan. She declared, "I’m happy in a way that’s different. Not a high or a low, just a balance — which, if you know my personality at all, it’s not often that balanced. But I feel just balanced and healthy.”

She also remarked, "My boyfriend’s very calm and centered and, yeah, balancing. And I’m just settled."

In contrast, it seemed seemed like she referenced Dennis during that interview when she said, "I came off a relationship that was the opposite." Bethenny continued, "We’ve all been in that kind of relationship, where you’re up and down, in and out, and you’re not ever sure of your footing." What a difference!

Sure, the RHONY fans are most interested in Paul's time with Bethenny, but there's a lot more to him than that. According to a September 2018 article from People, Paul is a real estate developer and film producer who lives in the Boston area. According to his Linkedln account, he is a cofounder at Burn Later, a Los Angeles-based production company. Paul is also a managing partner for Rubicon Real Estate, LLC, company that manages investment properties, according to its official website.

Bethenny has shared so much of her life with the Real Housewives of New York fans throughout the years. After all that she's been through, no one can blame her for trying to have one private thing in her life.

More like this
'RHOSLC' Star Jen Shah Refuses To Do A Post-Sentencing Interview With Andy Cohen
By Brad Witter and Jake Viswanath
Lenny Hochstein's “Boob God” Reputation Bolsters His Multimillion-Dollar Net Worth
By Brad Witter
Everything To Know About 'RHONJ' Season 13
By Brad Witter and Jake Viswanath
'Bachelor' Star Cassie Randolph’s Sister Is In The 'Yellowstone' Spinoff '1923'
By Grace Wehniainen
Get Even More From Bustle — Sign Up For The Newsletter
From hair trends to relationship advice, our daily newsletter has everything you need to sound like a person who’s on TikTok, even if you aren’t.