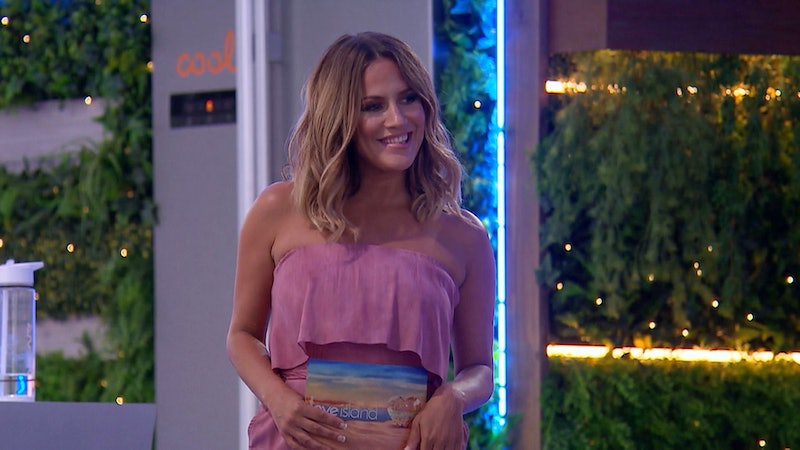 #DayDot is nearly here, and boy am I excited to try and recreate the absolute belter of a summer the UK had last year thanks to Love Island. And while I'm as prepared as every other Brit to indulge in the love lives of complete strangers, I can't help but feel a little intrigued as to who the Flack Attack might be sharing the gorgeous Spanish sun with this summer. So who is Caroline Flack dating in 2019?

Ahead of the launch of her second clothing line for River Island, Flack let her followers ask her questions about the range and life in general. The presenter answered *a lot* of questions, but one of the most asked was whether she was single or if she was looking for love. "Thank you for taking such an interest in my love life!" she said (via the Daily Mail). "One does not reveal what's going on in one's love life right now." I've reached out to Flack's rep for further comment on this and have yet to hear back, but it looks like she is keeping her relationship status on the down-low.

While that may be the case, that hasn't stopped rumours from circulating in regards to who she may or may not be seeing. In February this year, Flack was allegedly dating personal trainer Bradley Simmonds after they were spotted together in London. "Caroline and Bradley tried to keep things professional but they've fallen head over heels and they're now dating," a source told The Sun. "After spending so much time together, they just fell head over heels in love for each other, although it's still early days."

Take from that what you will, as The Sun then alleged in March that Flack was dating rugby player Danny Cipriani after they were seen at a retreat in Somerset. Another source told the newspaper: "It's nothing too serious at this stage, but they had a great couple of days."

Looking at Flack's social media, she hasn't shared any pics with a new beau since she and Andrew Brady parted ways last December. But as the presenter explained in an interview with the Daily Mail's You magazine in February, she's decided to keep her personal life a little more private. "One thing I've learnt is to police my own boundaries and not to expose so much of myself on social media," she said. "I was so in love [with Andrew] and it all felt so blissful that I wanted the world to know. I wore my heart on my sleeve; I overshared and posted loads of pictures on Instagram." She added:

"That's the lesson I won't forget; I must always keep something back. Since then I've been 'linked' to every younger man I've had so much as a conversation with. And lucky me, I'm not about to live a mind-numbingly boring existence to please other people."

You tell 'em, Flack. I can't wait to see this TV presenting powerhouse back on our screens this summer.